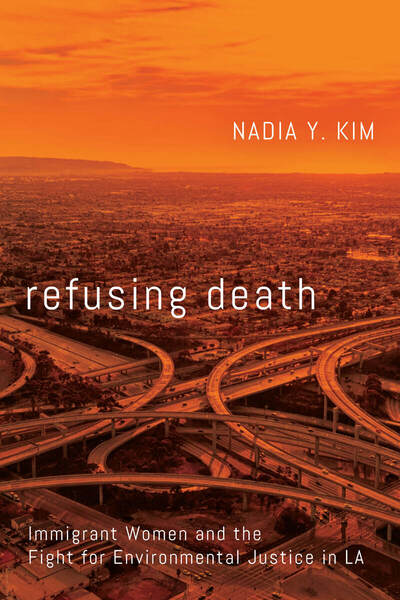 The industrial-port belt of Los Angeles is home to eleven of the top twenty oil refineries in California, the largest ports in the country, and those "racist monuments" we call freeways. In this uncelebrated corner of "La La Land" through which most of America's goods transit, pollution is literally killing the residents. In response, a grassroots movement for environmental justice has grown, predominated by Asian and undocumented Latin@ immigrant women who are transforming our political landscape—yet we know very little about these change makers. In Refusing Death, Nadia Y. Kim tells their stories, finding that the women are influential because of their ability to remap politics, community, and citizenship in the face of the country's nativist racism and system of class injustice, defined not just by disproportionate environmental pollution but also by neglected schools, surveillance and deportation, and political marginalization. The women are highly conscious of how these harms are an assault on their bodies and emotions, and of their resulting reliance on a state they prefer to avoid and ignore. In spite of such challenges and contradictions, however, they have developed creative, unconventional, and loving ways to support and protect one another. They challenge the state's betrayal, demand respect, and, ultimately, refuse death.

Nadia Y. Kim is Professor of Sociology at Loyola Marymount University. She is the author of the award-winning book Imperial Citizens (Stanford, 2008).

"Immigrant environmental justice movements are at the leading edge of social change in global cities, and yet they are frequently overlooked. Nadia Kim delivers a major intervention for reassessing the impacts of these movements, extending our vision with a keen ethnographic eye, a compelling narrative, and robust theoretical analyses."

—David Naguib Pello, author of What is Critical Environmental Justice?

"An urgent, much-needed account of the activism of Filipin@ and Latin@ immigrant activists in Los Angeles. Spotlighting gendered resistance and community citizenmaking, Kim effectively recasts environmental justice to mean commitment to care for both physical and emotional lives."

"An innovative and close-up look at the ways in which Latin@ and Filipin@ activists mobilize bodies, emotions, and gendered caregiving in their struggle for environmental justice."

Refusing Death: Immigrant Women and the Fight for Environmental Justice in LA

Ko-fi
How to Tune Out the Noise

The Science of Happiness
More in Sociology—Immigration