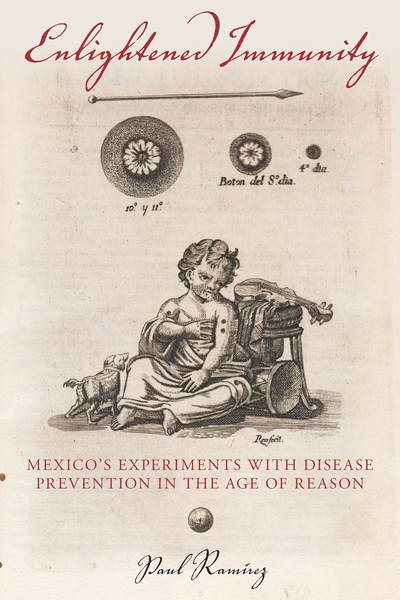 In eighteenth-century Mexico, outbreaks of typhus and smallpox brought ordinary residents together with administrators, priests, and doctors to restore stability and improve the population's health. This book traces the monumental shifts in preventive medicine and public health measures that ensued. Reconstructing the cultural, ritual, and political background of Mexico's early experiments with childhood vaccines, Paul Ramírez steps back to consider how the design of public health programs was thoroughly enmeshed with religion and the church, the spread of Enlightenment ideas about medicine and the body, and the customs and healing practices of indigenous villages.

Ramírez argues that it was not only educated urban elites—doctors and men of science—whose response to outbreaks of disease mattered. Rather, the cast of protagonists crossed ethnic, gender, and class lines: local officials who decided if and how to execute plans that came from Mexico City, rural priests who influenced local practices, peasants and artisans who reckoned with the consequences of quarantine, and parents who decided if they would allow their children to be handed over to vaccinators. By following the multiethnic and multiregional production of medical knowledge in colonial Mexico, Enlightened Immunity explores fundamental questions about trust, uncertainty, and the role of religion in a moment of discovery and innovation.

Paul Ramírez is Assistant Professor of History at Northwestern University.

"Enlightened Immunity is the sort of book that should shape our field: a deeply researched, wholly original, and well-executed study with something important to say. Ramírez deftly illuminates multiple contexts that shaped responses to epidemic disease in New Spain, including Atlantic communities of learning, political networks, and local knowledge."

"In rich and imaginative prose, Enlightened Immunity immerses readers in the highly mediated world of preventive health in late colonial Mexico, with its smells of candle wax in processions, the sound of trumpets heralding the arrival of vaccine, the cookies and coins given the poor to entice their cooperation, the rumors and political rituals, indigenous vaccinators, barbers and clerics. This is a tour de force—a great read with great insight into the history of inoculation and vaccination, the immense complexities of suffering in late colonial Mexico, and the confusion and contradictions of the ordinary and extraordinary attempts to prevent it."

"[An] original and meticulous examination of the problems of disease, medical practice, scientific developments, health care, and natural remedies during late eighteenth and early nineteenth century in New Spain.Enlightened Immunity is a provocative, richly documented, and innovative contribution to the social history of medicine, public health, science, and technology in Latin America."––Claudia Agostoni, H-LatAm

"Enlightened Immunity is a stellar addition to the history of medicine in Mexico and Latin America....The author uses the notes to elucidate the text, and the secondary research is outstanding. Ramírez uses an erudite prose and a 'thick' analysis that will make this book essential reading on the history of medicine in Latin America for years to come."

"Paul Ramírez presents a novel picture of the inoculation campaign in New Spain....The story he tells, chronologically broader and socially denser than many histories of the vaccination campaign, challenges some of the more entrenched binaries—expert knowledge versus vernacular knowledge, science versus religion, rationality versus superstition—that have framed the historiography of colonial Spanish science."

"Enlightened Immunity is an impressively researched work that weaves together the history of medicine, intellectual history, and religious history... Ramírez tells a story that rings as true today as it did at the turn of the nineteenth century."

—Liana DeMarco, Journal of the History of Medicine

"What makes Ramírez's account of preventative medicine and public health in colonial-era Mexico so incisive is its deliberate problematizing of any clear distinctions between urban and rural, secular and religious, and elite and vernacular toward a thick history of how 'heterogeneous voices shaped debate'."

"Enlightened Immunityreveals the inadequacy of medical histories that focus only on the perceptions and intentions of scientific and political authorities, and overlook how preventative treatments and cures are applied (or misapplied, or not applied) among flesh-and-blood communities."