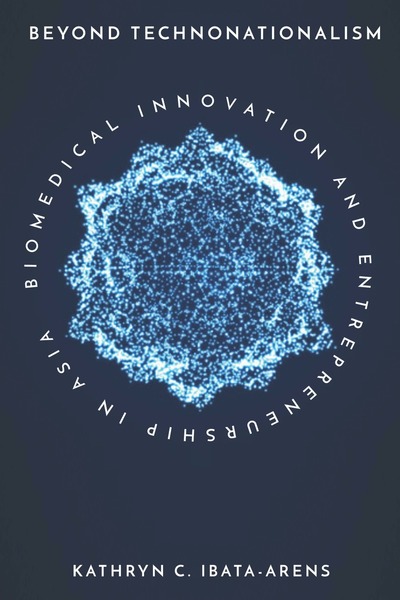 Beyond Technonationalism
Biomedical Innovation and Entrepreneurship in Asia
Kathryn C. Ibata-Arens
SERIES: Innovation and Technology in the World Economy

The biomedical industry, which includes biopharmaceuticals, genomics and stem cell therapies, and medical devices, is among the fastest growing worldwide. While it has been an economic development target of many national governments, Asia is currently on track to reach the epicenter of this growth. What accounts for the rapid and sustained economic growth of biomedicals in Asia?

To answer this question, Kathryn Ibata-Arens integrates global and national data with original fieldwork to present a conceptual framework that considers how national governments have managed key factors, like innovative capacity, government policy, and firm-level strategies. Taking China, India, Japan, and Singapore in turn, she compares each country's underlying competitive advantages. What emerges is an argument that countries pursuing networked technonationalism (NTN) effectively upgrade their capacity for innovation and encourage entrepreneurial activity in targeted industries. In contrast to countries that engage in classic technonationalism—like Japan's developmental state approach—networked technonationalists are global minded to outside markets, while remaining nationalistic within the domestic economy.

By bringing together aggregate data at the global and national level with original fieldwork and drawing on rich cases, Ibata-Arens telegraphs implications for innovation policy and entrepreneurship strategy in Asia—and beyond.

Kathryn C. Ibata-Arens is Vincent de Paul Professor of Political Science and Director of the Global Asian Studies Program at DePaul University. She is the author of Innovation and Entrepreneurship in Japan: Politics, Organizations, and High Technology Firms.

—Kenneth A. Oye, Professor of Political Science and Data, Systems, and Society, Massachusetts Institute of Technology

"In Beyond Technonationalism, Ibata-Arens encourages us to look beyond the Asian developmental state model, noting how the model is increasingly unsuited for first-order innovation in the biomedical sector. She situates state policies and strategies in the technonationalist framework and argues that while all economies are technonationalist to some degree, in China, India, Singapore and Japan, the processes by which the innovation-driven state has emerged differ in important ways. Beyond Technonationalism is comparative analysis at its best. That it examines some of the world's most important economies makes it a timely and important read."

"Kathryn Ibata-Arens masterfully weaves a comparative story of how ambitious states in Asia are promoting their bio-tech industry by cleverly linking domestic efforts with global forces. Empirically rich and analytically insightful, she reveals by creatively eschewing liberalism and selectively using nationalism, states are both promoting entrepreneurship and innovation in their bio-medical industry and meeting social, health, and economic challenges as well."

"Beyond Technonationalism provides a much-needed global and comparative perspective to understand Asia's foray into the biomedical industry....[An] excellent guide to the field of innovation studies, science and technology policy, and the global history of biotechnology."

"Beyond Technonationalism proposes a bold new conceptual framework of networked technonationalism. Leveraging her incisive insights and wellresearched data, IbataArens delves into the policies and economic backgrounds of Japan, China, India, and Singapore....[A] muchneeded update to the politicaleconomic view of national development and innovative entrepreneurship that are increasingly relevant is an increasingly turbulent world."

"Ibata-Arens has offered an insightful work that develops greater understanding of the rise in diversity of national innovation policies. It is an important perspective from which to view the shifts that will occur as the power balance in innovation moves to more points around the globe."