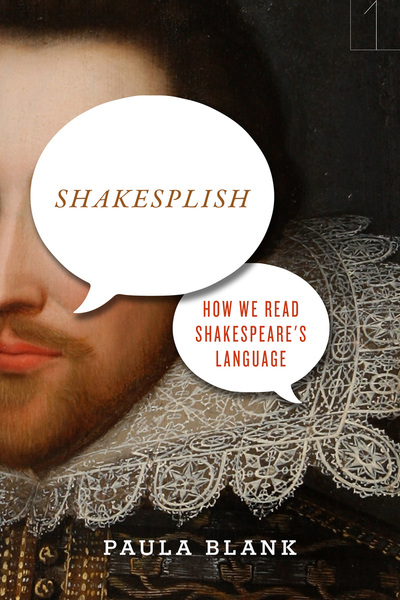 Shakesplish
How We Read Shakespeare's Language
Paula Blank
SERIES: Square One: First-Order Questions in the Humanities

For all that we love and admire Shakespeare, he is not that easy to grasp. He may have written in Elizabethan English, but when we read him, we can't help but understand his words, metaphors, and syntax in relation to our own. Until now, explaining the powers and pleasures of the Bard's language has always meant returning it to its original linguistic and rhetorical contexts. Countless excellent studies situate his unusual gift for words in relation to the resources of the English of his day. They may mention the presumptions of modern readers, but their goal is to correct and invalidate any false impressions. Shakesplish is the first book devoted to our experience as modern readers of Early Modern English. Drawing on translation theory and linguistics, Paula Blank argues that for us, Shakespeare's language is a hybrid English composed of errors in comprehension—and that such errors enable, rather than hinder, some of the pleasures we take in his language. Investigating how and why it strikes us, by turns, as beautiful, funny, sexy, or smart, she shows how, far from being the fossilized remains of an older idiom, Shakespeare's English is also our own.

Paula Blank (1959–2016) was Margaret L. Hamilton Professor of English at the College of William and Mary and the author of Broken English (1996) and Shakespeare and the Mismeasure of Man (2006).

"As Paula Blank argues, whether or not we are dipping into a 'No Fear' edition, we are always paraphrasing Shakespeare. Shamelessly fun to read, this original and timely book should have broad appeal."

"In her worthy sequel to Broken English, Paula Blank meditates provocatively on the 'friction' induced by our distance from early modern English. Shakesplish confronts and celebrates that distance, giving voice to a past now revived for our era."

"This beautifully conceived book argues for a new and suggestive way of making Shakespeare our contemporary, at once familiar and exotic. Focusing on Shakespeare's language not as he might have intended it but as we understand it today, Paula Blank shows how what registers to a modern reader as the difficulty or strangeness of Shakespeare actually provokes singularly rich forms of cultural and personal self-discovery."

"We owe Paula Blank much thanks for bequeathing to us a book that I would not hesitate to describe as possessing the same traits she has analyzed for us—a book that is 'beautiful', 'funny', 'smart', and yes, even 'sexy': seductive, that is, in the elegant and articulate way in which it helps reveal to us our innermost desires about what Shakespeare's language should be."

"Blank returns the reader to the act of luxuriating in the opulent richness of Shakespeare's language like no other scholar I have ever encountered. Shakesplish: How We Read Shakespeare's Language will be consulted for decades to come because of its indefatigable energy and exuberate erudition."