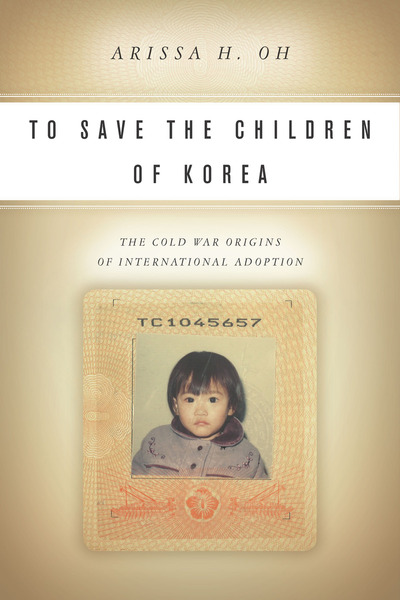 To Save the Children of Korea
The Cold War Origins of International Adoption
Arissa H. Oh
SERIES: Asian America

To Save the Children of Korea is the first book about the origins and history of international adoption. Although it has become a commonplace practice in the United States, we know very little about how or why it began, or how or why it developed into the practice that we see today.

Arissa Oh argues that international adoption began in the aftermath of the Korean War. First established as an emergency measure through which to evacuate mixed-race "GI babies," it became a mechanism through which the Korean government exported its unwanted children: the poor, the disabled, or those lacking Korean fathers. Focusing on the legal, social, and political systems at work, this book shows how the growth of Korean adoption from the 1950s to the 1980s occurred within the context of the neocolonial U.S.-Korea relationship, and was facilitated by crucial congruencies in American and Korean racial thought, government policies, and nationalisms. It also argues that the international adoption industry played an important but unappreciated part in the so-called Korean "economic miracle."

Arissa H. Oh is Assistant Professor in the Department of History at Boston College.

"An absolutely fascinating study of South Korea's role in the history of international adoption. After the 1950-53 Korean War, thousands of mixed-race 'GI babies' were shipped over to the US. Rejected by their native country for being 'racially impure', they were welcomed by American families looking to adopt, and by a US government that sought to reinforce its liberal status in the new Cold War environment."

"Arissa Oh's fascinating and gracefully written transnational study provides the contextualization and theorization of international adoption that has been missing from the literature. Through the lens of Korean adoption, Oh shows us how domestic politics and desires are intertwined with geopolitical relationships and aims, expanding our understanding of Cold War liberalism and even Cold War era postcolonial modernization."

"This work seeks to tell the important and largely unknown story of American adoption of Korean children since the Korean War, and does so with remarkably extensive research and great verve. The work succeeds extremely well at both levels: telling the local, bilateral story and the origins of the global story."

"Arissa Oh's unusually sensitive study examines the little-known story of Korean adoption....What makes this work particularly valuable, even for scholarly audiences beyond its subfield, is how deftly the author uses its narrow topic to explore Korean adoption's wider social, cultural, legal, and political climate in South Korea and the United States....Providing careful global comparative context for this particular story, as well as engaging a diverse historiography on postwar domesticity, Cold War civil rights, and the social life of empire, Oh excels at weaving together the state and private familial sphere....[W]ith its poignant, wide-ranging analysis and research, Oh's Korea-focused account sheds invaluable light on nagging issues of Global North-South inequality, underdeveloped social institutions, and politicized family life in ways that should inform future studies in its field."

"To Save the Children of Korea would be of interest to historians of modern Korean history and American Cold War history. The book also makes important contributions to interdisciplinary fields such as adoption studies, critical mixed-race studies, and Asian American and ethnic studies....[T]his book illuminates how the spheres of "public" and "private," "domestic" and "political" are deeply imbricated and complicate American ideologies about family, nation, and race that rely on these binaries."

PRI
In South Korea, international adoption as a solution to social problems

Boston Globe
To Save the Children of Korea: On the History of International Adoption

The Toast
Yuh on Oh: "To Save the Children of Korea: The Cold War Origins of International Adoption"