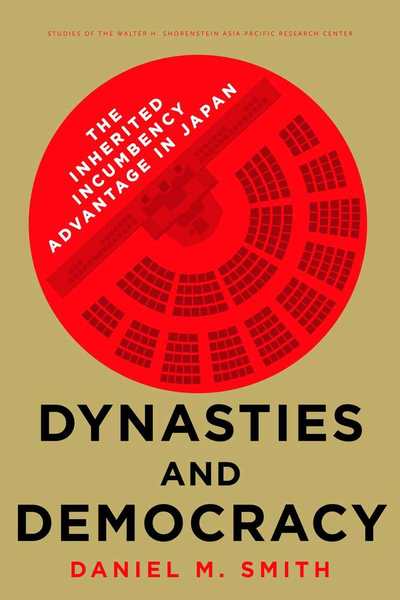 Although democracy is, in principle, the antithesis of dynastic rule, families with multiple members in elective office continue to be common around the world. In most democracies, the proportion of such "democratic dynasties" declines over time, and rarely exceeds ten percent of all legislators. Japan is a startling exception, with over a quarter of all legislators in recent years being dynastic. In Dynasties and Democracy, Daniel M. Smith sets out to explain when and why dynasties persist in democracies, and why their numbers are only now beginning to wane in Japan—questions that have long perplexed regional experts.

Smith introduces a compelling comparative theory to explain variation in the presence of dynasties across democracies and political parties. Drawing on extensive legislator-level data from twelve democracies and detailed candidate-level data from Japan, he examines the inherited advantage that members of dynasties reap throughout their political careers—from candidate selection, to election, to promotion into cabinet. Smith shows how the nature and extent of this advantage, as well as its consequences for representation, vary significantly with the institutional context of electoral rules and features of party organization. His findings extend far beyond Japan, shedding light on the causes and consequences of dynastic politics for democracies around the world.

Daniel M. Smith is Associate Professor in the Department of Government at Harvard University.

"Daniel Smith's Dynasties and Democracy is a triumph of expositional clarity and measurement. It is hard to think of a sharper evaluation of the effects of political institutions on the quality and nature of democratic competition."

"Smith's book on dynastic politicians in Japan is a gem. He firmly and usefully places Japan into the comparative context through extensive presentation and analysis of data in other countries. His analysis will become the standard explanation for dynastic politicians in Japan. The prolific anecdotes and illustrations will also make this book appealing in classrooms."

"As E. E. Schattschneider put it, 'he who can make the nominations is the owner of the party.' Dynasties and Democracy investigates parties in which such 'ownership' is effectively inheritable, giving rise to political family dynasties. It provides both a fascinating comparative study of nominations and the most compelling analysis to date of democratic dynasties."

"This deep dive into the phenomenon of democratic electoral dynasties is a valuable contribution to the comparative politics literature, not the least because the author makes good use of comparable findings from the Philippines and established democracies beyond Asia, such as the US, Ireland, and Israel. The puzzle presented by the high rate of such dynasties in the Japanese Diet by comparison with other liberal democracies and their implications for governing tie together the book's narrative and empirical findings....Recommended."

"Finding the right balance between a deep understanding of a given context and a broader perspective on political phenomena is difficult. There is no doubt that Daniel M. Smith succeeds in his book...This is part of a much broader comparative endeavour that has the potential to reinvent the study of institutionalized political actors. Some scholars are better than others at maximizing the output from such data and Smith is among the best."

"Daniel Smith demonstrates that political institutions, especially electoral systems and candidate selection procedures, influence the dominance of political dynasties in Japan, thereby countering the view that the dominance is merely a reflection of Japan's indigenous traditions and culture.Smith tests the fascinating hypothesis persuasively by using extensive data and sophisticated methods and paints a vivid picture of the reality of Japanese politics."

"Utilizing mixed methods and exploring multiple dimensions of the subject, Smith successfully lays out a comprehensive and in-depth study of democratic dynasties....[The] findings of this book are valuable not just for those who study Japanese politics but also for those who are interested in politics in other areas as well."

"[Few] studies have sought to understand the wide variation in dynastic politicians across democracies over time. Dynasties and Democracy offers a comprehensive answer to this question....certainly a key referent for future work to understand the existence of dynasties in democracies."

"Dynasties and Democracy is destined to be on the syllabi of Japanese politics courses for many years to come, and indeed it hould also be required reading for all students of electoral politics. Smith lays out his sophisticated theoretical project with ease while helping us see the people and institutions that populate the world of Japanese politics. Dynasties and Democracy is political science at its very best, and Smith one of the field's sharpest voices."

"Dynasties and Democracy gives a valuable and detailed look into the puzzling phenomenon of legacy politics in Japan while placing Japan's experience in comparative context. It is a data-rich, thoroughly researched, and accessibly written book....An invaluable resource for scholars of Japanese and comparative electoral and party politics."

"Smith's book can be credited with taking a markedly different approach to the topic of second-generation Diet members, one that is innovative....[This] book deserves to be seen as an outstanding work of scholarship."

"[One] of the most fully researched studies of Japanese politics to appear in recent years....[This] book should be recommended as a powerful study of dynastic politics in Japan and a valuable contribution to the understanding of political dynasties more generally. It should be on any reading list in courses on Japanese politics and comparative courses on parliamentary democracy."