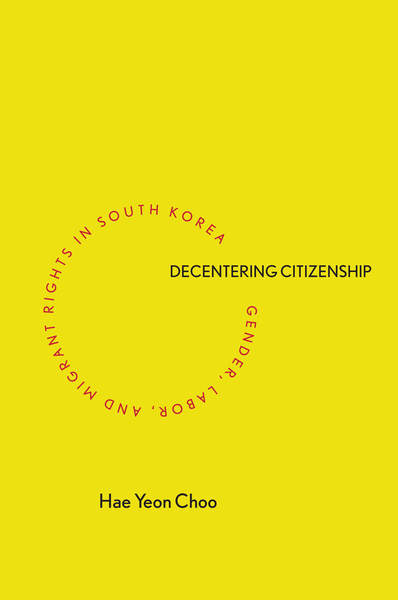 Decentering Citizenship follows three groups of Filipina migrants' struggles to belong in South Korea: factory workers claiming rights as workers, wives of South Korean men claiming rights as mothers, and hostesses at American military clubs who are excluded from claims—unless they claim to be victims of trafficking. Moving beyond laws and policies, Hae Yeon Choo examines how rights are enacted, translated, and challenged in daily life and ultimately interrogates the concept of citizenship.

Choo reveals citizenship as a language of social and personal transformation within the pursuit of dignity, security, and mobility. Her vivid ethnography of both migrants and their South Korean advocates illuminates how social inequalities of gender, race, class, and nation operate in defining citizenship. Decentering Citizenship argues that citizenship emerges from negotiations about rights and belonging between South Koreans and migrants. As the promise of equal rights and full membership in a polity erodes in the face of global inequalities, this decentering illuminates important contestation at the margins of citizenship.

Hae Yeon Choo is Assistant Professor of Sociology and Affiliated Faculty of the Asian Institute and the Women and Gender Studies Institute at the University of Toronto.

"Decentering Citizenship offers a fascinating comparative portrait of three Filipina migrant groups in South Korea. The book is equally a study of domestic advocates of migrants, and of the important effect they have on migrants' well-being. Choo's groundbreaking work will enjoy a wide readership and deserves to be widely taught in undergraduate classes."

"With verve and sophistication, Choo captures the plurality of experiences of migrant women in South Korea—their multiple voices, triumphs and trials, and the numerous contradictions they face. Decentering Citizenship is at once a fast-paced and engrossing ethnography and an insightful, often brilliant rumination on citizenship, kinship, and human rights."

"This brilliant book examines the timely topic of international migration with an innovative design of comparative research. Choo vividly demonstrates that the political membership of nationhood and the moral community of humanity are reimagined whenever we confront the question of what kinds of foreigners are 'worthy' of being included."

"As South Koreans wrestle with how to incorporate the growing numbers of foreign workers, marriage migrants, and biracial children, they have had to rethink automatic assumptions about citizenship, national belonging, and Korean identity. In Decentering Citizenship, Hae Yeon Choo tackles these important issues through the lens of Filipina migrants residing in South Korea. This rich ethnography is the first to provide such comparative analysis of a fast-growing immigrant population that is reshaping who South Koreans are and what South Korea is. As such, this book should be on the reading list for anyone who wants to better understand the social revolution that is sweeping South Korea today."

"Decentering Citizenship is an ethnographically rich and analytically cogent book that calls for the recognition of migrants' rights through a reimagination of citizenship...This book will be of interest to those interested in migration, human rights, citizenship, and gendered nationalism. Its engaging stories and clear writing make it suitable for both undergraduate and graduate-level teaching."

"Decentering Citizenship sparks numerous directions for new research, paving the way for other researchers to expand migration studies beyond the "imperial centers" and critically examine how global hierarchies are mediated through daily interactions in ways that shape the citizenship-making process. In short, Decentering Citizenship is a groundbreaking and beautifully written book that will attract a wide audience of scholars and students who are interested in international migration, gender inequality, social movements, and labor studies."

"Decentering Citizenship contributes to the field of critical migration studies by moving beyond the realm of law and policy to examine the spaces of daily life—what Choo calls the 'margins of citizenship'—where questions of migrant rights, entitlements, and belonging are negotiated and reimagined....As the short-term rotation migrant workforce becomes normalized across the world, Hae Yeon Choo's Decentering Citizenship offers us an insightful and well-researched study on the complexities, possibilities, and potential pitfalls of collective efforts to build a polity that enables equal rights and full political membership for migrants."

"Decentering Citizenship will be an invaluable resource in years to come for those wishing to explore the experience of ethnic minorities in traditionally homogenous countries, particularly in East Asia....Owing to Korea's rapidly aging population, a reliance on migrant labor appears unlikely to diminish. As the effects of Korea's demographic changes are felt more broadly across Korean society, Decentering Citizenship should be regarded as a cornerstone in the studies of their evolving labor market and the changing nature of Korean citizenship."

"Decentering Citizenship demonstrates the importance of the everyday life and moral community of the migrants as the sites of their rights-claims....Choo's analysis is a rare in-depth and comparative study of migrant activism."