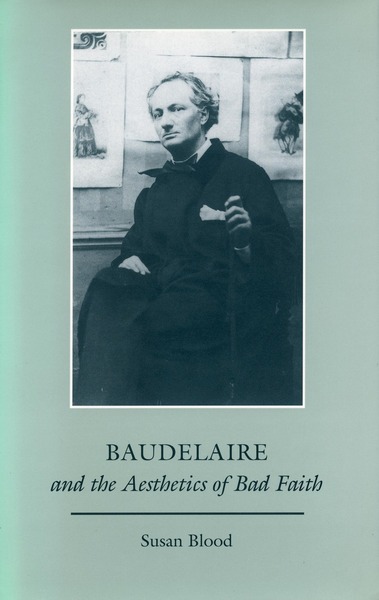 Baudelaire and the Aesthetics of Bad Faith
Susan Blood

This is a study of Baudelaire's canonization in the critical debates of the twentieth century, focusing particularly on his role in the development of a modernist consciousness. Much recent work on Baudelaire assumes his modernism by emphasizing his relationship to current critical preoccupations—by sounding him out on issues of race and gender, for example, or by "correcting" his politics. The author begins from the premise that this updating of Baudelaire mistakenly takes him for our contemporary. Instead, she attempts to treat modernism as a historical problem by seeing Baudelaire as engaged in a more difficult dialogue with twentieth-century critics.

The book concentrates on two key moments in the literary history of the twentieth century, the periods following each world war. At these junctures French intellectuals intensely reconsidered their cultural patrimony and articulated something like a modernist consciousness. Baudelaire stood at the center of this process, becoming a sacred figure of modernism, and his poetry contributed to a radical reorienting of aesthetic sensibilities.

For the post-World War I period, the author focuses on Paul Valéry's essay "Baudelaire's Situation"; for post-World War II, on the virulent debate between Jean-Paul Sartre and Georges Bataille over the question of Baudelaire's "bad faith." She argues that Sartre's resistance to the sacralization of Baudelaire and to the continuing formulation of a modernist ideology actually suggests a valuable way of rethinking Baudelaire's poetry and critiquing the modern consciousness. She attempts to show that something like an "aesthetics of bad faith" exists, and that it is a useful concept for understanding modernism in relationship to its own history.

Throughout, Baudelaire's poetry is examined in detail, with a focus on its relationship to his writings on caricature, on the problem of the "secret architecture," and on the place of allegory in a symbolist poetics. In the closing chapter, the author analyzes Baudelaire's denunciation of photography, which reveals the various tensions (or "bad faith") implicit in the modernist consciousness.

“This ambitious and important book addresses the broader issue of modernism in relation to the difficult question of its historicity. It should be of great interest to those concerned with specific theoretical issues—the aesthetics of allegory, the status of literary history and historical consciousness—as well as those interested in specific critical works—Bataille, Benjamin, de Man, Sartre—which are central to the author's analysis of Baudelaire.”—Suzanne Guerlac, Emory University