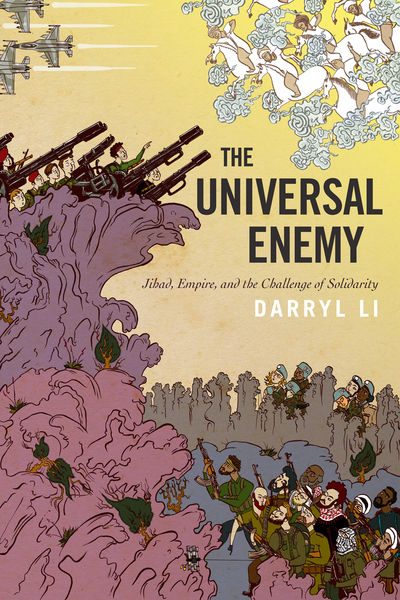 The Universal Enemy
Jihad, Empire, and the Challenge of Solidarity
Darryl Li
SERIES: Stanford Studies in Middle Eastern and Islamic Societies and Cultures

Winner of the 2021 William A. Douglass Prize in Europeanist Anthropology, sponsored by the Society for the Anthropology of Europe (a unit of the American Anthropological Association).

No contemporary figure is more demonized than the Islamist foreign fighter who wages jihad around the world. Spreading violence, disregarding national borders, and rejecting secular norms, so-called jihadists seem opposed to universalism itself. In a radical departure from conventional wisdom on the topic, The Universal Enemy argues that transnational jihadists are engaged in their own form of universalism: these fighters struggle to realize an Islamist vision directed at all of humanity, transcending racial and cultural difference.

Anthropologist and attorney Darryl Li reconceptualizes jihad as armed transnational solidarity under conditions of American empire, revisiting a pivotal moment after the Cold War when ethnic cleansing in the Balkans dominated global headlines. Muslim volunteers came from distant lands to fight in Bosnia-Herzegovina alongside their co-religionists, offering themselves as an alternative to the US-led international community. Li highlights the parallels and overlaps between transnational jihads and other universalisms such as the War on Terror, United Nations peacekeeping, and socialist Non-Alignment. Developed from more than a decade of research with former fighters in a half-dozen countries, The Universal Enemy explores the relationship between jihad and American empire to shed critical light on both.

Darryl Li is Assistant Professor of Anthropology and Lecturer in Law at the University of Chicago.

"Focused on the Bosnian jihad and the wider world, both in that era and since, The Universal Enemy is original, authoritative, and broad in significance. This remarkable achievement is anchored in Darryl Li's unique combination of skills and sensibilities, which are at once ethnographic, lawyerly, and linguistic."

"In this deeply original book, Darryl Li paints a vivid portrait of jihadist universalism and its mobilization both for and against imperial power. Thought-provoking and beautifully written, The Universal Enemy raises important questions about the legalities, conduct, and effects of global violence in all its forms."

"A fascinating and highly readable account of jihad from the perspective of Islamic fighters. The Universal Enemy shows brilliantly that jihad is not a uniform terrorist movement but includes a wide variety of actors, motivations, and ideologies inspired by religion and the aspiration for universality, parallel to other ideologies such as human rights."

"Darryl Li offers superb insight into a figure that shapes so much law and policy but is little understood—the 'universal enemy,' the foreign Muslim fighter. Telling the stories of these mujahids, their motivations and aspirations, with exceptional empathy and detail, he challenges much of what we think we know. The Universal Enemy offers a new and compelling way of understanding universalism and violence, empire and solidarity."

"[This book] stingingly criticizes the field of 'jihadism' as an academic discipline connected to the national security state....Li lets his subjects speak for themselves and casts few judgments. The picture that emerges is a morally complex one."

"The Universal Enemy is extraordinary in combining many of the techniques of social science with a sophisticated knowledge of Islamic doctrines and controversies—except that, rather than assuming that religious texts are simply vectors for ideology, he focuses on how they are actually produced and used....[Li] seems to have read everything relevant to his topic and to anticipate many possible counter-arguments."

"The Universal Enemy is a critical and welcome addition to our debates around radicalisation, Islamism and transnational politics."

"Li is a gifted writer and storyteller, and his research has amazing breadth....[He] should be commended for a finely crafted plunge into international jihad."

"[Li] effectively confronts the demonization of jihadists in the aftermath of 9/11, particularly in the US....The author's linguistic skills and the depth of the interviews are impressive, and the case selection is intriguing. Recommended."

"[A] provocative and deeply researched new book....The Universal Enemy is the product of difficult and meticulous data collection. I expect that it will be cited as a standard-setting work of qualitative empirical research on political violence."

"This important book offers many insights for scholars and students of political thought, anthropology, and law. Li's breadth and acumen in navigating these different fields of study is impressive....[The Universal Enemy] offers a vital contribution to the literature on jihad and universalism, and will undoubtedly furnish its readers with critical tools to approach both with fresh perspectives."

"As an original study of transregional mobility and political belonging, Li's anthropological take on international law and history of empire upsets common assumptions about the politics of identity and solidarity in the context of contemporary warfare....[A] work of breathtaking reach and intrigue, The Universal Enemy explores how political identities form and collide through claims of belonging to a project larger than oneself."

"The Universal Enemy is a timely intervention into political as well as scholarly debates....The story of the Bosnian Jihad continues to influence a wide range of seemingly incommensurable projects and seems to pre-figure aspects of current debates about the nature of rights and the limits of legitimate coercion. Li's ambition in trying to theorize these complexly interwoven threads together should be commended."

"[At] once a methodology, an ethics, and a praxis....[The Universal Enemy] presents a challenge not only to the scholarly and policy expertise produced about 'terrorism' and 'jihad,' but also to the very practice of academic and political 'theorizing' about them in the first place.."

"This is an important and singular book, one that can be recommended to anyone interested in jihad, Bosnia, the GWOT, race and difference in Europe, or universalism... The Universal Enemy succeeds in illuminating these lived projects and enmeshments and making clear why, and how, they matter for us all."

"Li's book is a very important contribution to the study of terrorism and political violence because it points the way on how to do sound and grounded empirical research based on primary sources, which allows scholars to get the story straight and not rely exclusively on politically motivated government leaks and selected release of documents... Li's methodological triangulation from multiple primary sources challenges the government's narrative on foreign volunteers. By getting the story straight and showing the complexity of this issue, he undermines the facile, simple, but wrong equivalence between foreign volunteers and terrorists, and debunks many of our deeply held assumptions about terrorism."

"In examining jihad in its own terms although critically, Li's book reveals and disrupts analytics that start from American empire and its racialized security concerns. A compelling and provocative read, Darryl Li'sThe Universal Enemystands out for its originality, its erudition, its ethnographic reach, its eloquent writing and its broader implications for understanding and analysis in anthropology."

"Who and under what circumstances has the right to speak for the universal? That is the question animating Darryl Li's engaging, provocative, and analytically robust book, The Universal Enemy: Jihad, Empire and the Challenge of Solidarity... [The book] models the kind of transnational ethnography that is capable of pushing past the often-limiting confines of area studies, without sacrificing the depth of its engagement with specific histories, people, and places."

"Neither moralizing nor pathologizing jihad, Li pursues a 'serious conversation about political violence,' one equally attentive to the vicissitudes of nationalism and its relation to universalism, the internationalism of both NonAlignment and (violent) peacekeeping, and the ramifications of jihadi conceptions of sovereignty and the miraculous for thinking through the theories of Carl Schmitt."

A New Book Takes on the Problematic Academic Discipline of "Jihadism"

Ottoman History Podcast
‘Universal Enemy’: A Reappraisal of Jihadism through the Lens of Bosnia