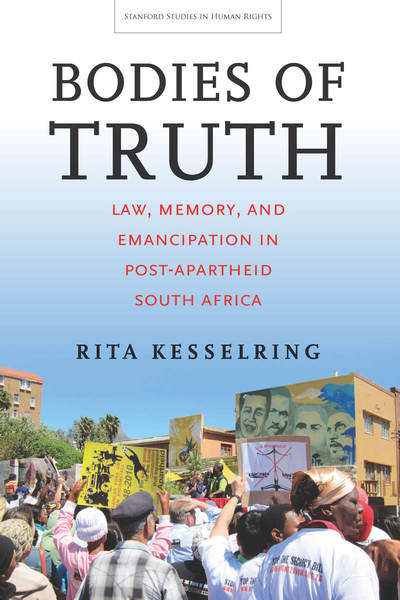 Bodies of Truth offers an intimate account of how apartheid victims deal with the long-term effects of violence, focusing on the intertwined themes of embodiment, injury, victimhood, and memory. In 2002, victims of apartheid-era violence filed suit against multinational corporations, accusing them of aiding and abetting the security forces of the apartheid regime. While the litigation made its way through the U.S. courts, thousands of victims of gross human rights violations have had to cope with painful memories of violence. They have also confronted an official discourse claiming that the Truth and Reconciliation Commission of the 1990s sufficiently addressed past injuries. This book shows victims' attempts to emancipate from their experiences by participating in legal actions, but also by creating new forms of sociality among themselves and in relation to broader South African society.

Rita Kesselring's ethnography draws on long-term research with members of the victim support group Khulumani and critical analysis of legal proceedings related to apartheid-era injury. Using juridical intervention as an entry point into the question of subjectivity, Kesselring asks how victimhood is experienced in the everyday for the women and men living on the periphery of Cape Town and in other parts of the country. She argues that the everyday practices of the survivors must be taken up by the state and broader society to allow for inclusive social change in a post-conflict setting.

Rita Kesselring is Senior Lecturer at the Institute for Social Anthropology at the University of Basel, Switzerland.

"Bodies of Truth is essential reading for all those interested in the twenty-year aftermath of the South African Truth and Reconciliation Commission. Kesselring's innovative ethnography with victims seeking redress in the South African and U.S. Courts examines the limits of law and also makes a powerful case for the transformative potential of new forms of shared sociality. The imaginative combination of the anthropology of law and the body to understand the after-effects of violence in people's lives makes this a ground-breaking work."

—Richard Ashby Wilson, author of The Politics of Truth and Reconciliation in South Africa

"Deeply serious and imaginative, Bodies of Truth connects anthropology of law and anthropology of the body. Rita Kesselring reveals that even when much is achieved legally in the struggle for transitional justice, bodily experiences of victimhood continue to haunt the victims, and endemic, systematic violence continues to shape the political sphere long after it has ended. Kesselring presents readers with ways in which liberation from habitual victimhood might be achieved."

"In capturing the difficulty of understanding pain, Kesselring's subtle, challenging ethnography will make essential reading for any scholar trying to understand the challenges of coming to terms with victimhood and its aftermath and will be particularly important reading for scholars of apartheid and its wake."

"Bodies of Truth is essential reading for anyone interested in victims' quests for financial reparations since the South African Truth and Reconciliation Commission finalized its work in 1998. Grounded in extensive transnational ethnography with a national victims' group that participated in class action lawsuits in the South African and US courts, Rita Kesselring's inventive monograph identifies the limits of law in recognizing and ameliorating harms committed by official agents of the avowedly racist apartheid government....Crucially, because Bodies of Truth integrates recent developments in the anthropology of the body with long-standing concerns about vernacular understandings of the law, this imaginative combination makes it a ground-breaking work."