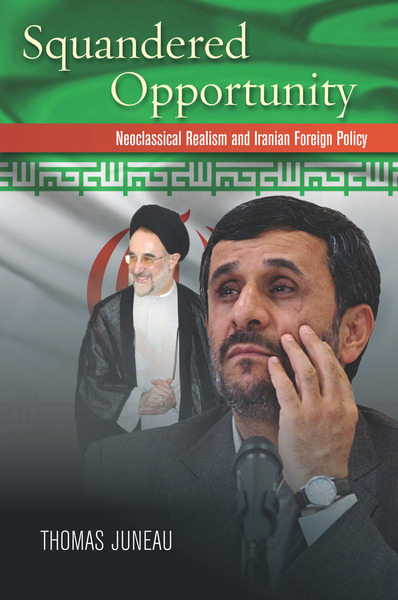 The Islamic Republic of Iran faced a favorable strategic environment following the US invasions of Afghanistan in 2001 and Iraq in 2003. Its leadership attempted to exploit this window of opportunity by assertively seeking to expand Iran's interests throughout the Middle East. It fell far short, however, of fulfilling its long-standing ambition of becoming the dominant power in the Persian Gulf and a leading regional power in the broader Middle East.

In Squandered Opportunity, Thomas Juneau develops a variant of neoclassical realism, a theory of foreign policy mistakes, to explore the causes and consequences of Iran's sub-optimal performance. He argues that while rising power drove Iranian assertiveness—as most variants of realism would predict—the peculiar nature of Iran's power and the intervention of specific domestic factors caused Iran's foreign policy to deviate, sometimes significantly, from what would be considered the potential optimal outcomes.

Juneau explains that this sub-optimal foreign policy led to important and negative consequences for the country. Despite some gains, Iran failed to maximize its power, its security and its influence in three crucial areas: the Arab-Israeli conflict; Iraq; and the nuclear program. Juneau also predicts that, as the window of opportunity steadily closes for Iran, its power, security, and influence will likely continue to decline in coming years.

Thomas Juneau is an Assistant Professor in the Graduate School of Public and International Affairs at the University of Ottawa.

"Squandered Opportunity is a valuable work that offers interesting theoretical advancement and important insights into Iranian foreign policy . . . [T]his work is an important contribution to the foreign policy decision-making literature and should be widely read."

"[T]he author's 'neo-classicalism' theory adequately addresses nuances by advancing four 'intervening' variables - ideas, individuals, identity, and institutions. Juneau analyzes three case studies of Iranian foreign policies to test his argument: Iran's policies in Iraq, the Arab-Israeli conflict, and Iran's nuclear program . . . In short, Iran provides little threat to the US, Europe, or even to Middle Eastern countries such as Israel and Saudi Arabia. This is an important book . . . Highly recommended."

"Sophisticated and theoretically-informed analysis of Iranian foreign policy is rare. Thomas Juneau remedies this, developing an explanation of Iran's behavior in the international environment that takes account of power politics, those features unique to Iran's domestic politics, and the interaction of the two."

"Squandered Opportunity is a rare book that synthesizes advanced theoretical analysis with detailed case study and regional expertise. Its rich theoretical framework has the potential to illuminate a path for scholars who wish to pursue case studies and engage modern-day foreign policy puzzles without giving up on strong theoretical insights....Overall, Squandered Opportunity offers an outstanding analysis that will be of great interest to scholars of IR theory, foreign policy analysis, realism, Iran, and the Middle East."