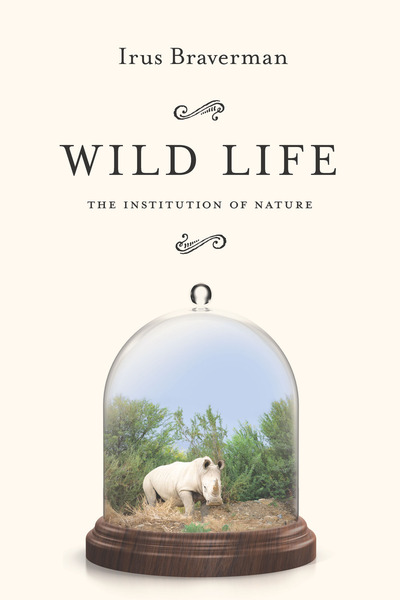 Wild Life documents a nuanced understanding of the wild versus captive divide in species conservation. It also documents the emerging understanding that all forms of wild nature—both in situ (on-site) and ex situ (in captivity)—may need to be managed in perpetuity. Providing a unique window into the high-stakes world of nature conservation, Irus Braverman describes the heroic efforts by conservationists to save wild life. Yet in the shadows of such dedication and persistence in saving the life of species, Wild Life also finds sacrifice and death. Such life and death stories outline the modern struggle to define what conservation should look like at a time when the long-established definitions of nature have collapsed.

Wild Life begins with the plight of a tiny endangered snail, and ends with the rehabilitation of an entire island. Interwoven between its pages are stories about golden lion tamarins in Brazil, black-footed ferrets in the American Plains, Sumatran rhinos in Indonesia, Tasmanian devils in Australia, and many more creatures both human and nonhuman. Braverman draws on interviews with more than one hundred and twenty conservation biologists, zoologists, zoo professionals, government officials, and wildlife managers to explore the various perspectives on in situ and ex situ conservation and the blurring of the lines between them.

Irus Braverman is Professor of Law and Adjunct Professor of Geography at the University of Buffalo, SUNY. She is the author of Planted Flags: Trees, Land, and Law in Israel/Palestine (2009), Zooland: The Institution of Captivity (2012), and coeditor of The Expanding Spaces of Law: A Timely Legal Geography (2014).

"Braverman has a legal background, but she demonstrates familiarity with key issues in conservation and has evidently consulted widely with a variety of experts who present a range of different viewpoints . . . Overall, this work presents some important issues that can complicate and detract from the success of conservation initiatives, and it will be of value to graduate students and professionals seriously considering a career in conservation."

"Braverman delivers a beautifully argued analysis of conservation efforts over the last three decades. In this masterful book, nothing less than the essence of what we mean by 'nature' is at stake. Wild Life makes the voices of conservationists heard while providing a sharp diagnosis of the ethical dilemmas and paradoxes of their efforts to save endangered species. A must-read."

"Wild Life is a wonderfully lucid, textured exploration of the many meanings of 'conservation' today. It is required reading for anyone interested in what 'nature' and 'wilderness' mean in the context of the sixth extinction event in the history of the planet. Braverman makes a crucial contribution to the growing scholarship that pushes biopolitical thought beyond homo sapiens."

—Cary Wolfe, Rice University, author of Before the Law: Humans and Other Animals in a Biopolitical Frame

"Wild Life is a journey through the changing conceptual geography of species conservation. Drawing on a cast of over one hundred conservation practitioners, Braverman builds a unique portrait of a field at a turning point. A fascinating compendium of boundary-challenging case studies in conservation and a deeply felt ethnography, Wild Life is essential reading."

"Wild Life confronts the conceptual divide between 'natural' and 'unnatural' environments. This false dichotomy informs the often bitter politics of conservation efforts, and has enormous implications for the future impact of climate change, environmental degradation, and the steady depletion of biodiversity on a global scale. An extraordinarily provocative book."

"Wild Life is a must-read, especially for young people growing up in a world where all of nature is managed and the divides between in situ and ex situ have disappeared. Braverman interviews a wide array of conservationists and tells real life stories of species on the brink of extinction, making a unique contribution to conservation and to how we think about nature."

"This is a most thoughtful and well-written book about the difficulty of separating ideas about the lives of nonhuman animals (animals) who are held 'captive' and animals who are considered to be 'wild.' While there are clear distinctions, for example, between an elephant who is held captive in a cage in a zoo and shipped around here and there as a mating machine, and an elephant who is free to move around in large wild areas, even those who are fenced, the latter individuals still are captive but to a lesser degree than their caged relatives. Many other examples make the case that 'wild' does not mean 'free.' I highly recommend this book for those who want a good picture of the complexities of distinguishing between wild and captive and also what the word 'nature' means in an epoch called the 'anthropocene.' There's a smorgasboard of opinions, each of which needs to be openly discussed, as we move into unprecedented times of increased human domination of our magnificent planet - earth, air, and water. We're here, there, and everywhere, and it isn't getting better. Excellent for advanced undergraduate and graduate courses."

—Marc Bekoff, Professor Emeritus of Ecology and Evolutionary Biology at the University of Colorado, Boulder

"Braverman has written a book that challenges the reader's beliefs on every page, stimulates so much thought, and creates so many "aha!" moments that I wished it was twice as long. . . . It is a book that anyone who is interested in the direction that our world is taking should read. It is a book that anyone interested in conservation should have, that anyone who has a bumper sticker that says 'Save the (fill in species)' or is a member of a conservation organization should use to understand the complexities of our attempts for these species' salvation. Through Wild Life, Irus Braverman excellently traces the shapes of the debates and brings to light a side of conservation that needs to be understood. In a very real way, the fate of so many lives on our planet hinges on these issues."

"Wild Life: The Institution of Nature is the second book by Irus Braverman dealing with the topic of zoos, following the highly acclaimed 2012 publication of Zooland: The Institution of Captivity. In short, both books are mustreads for anyone in our profession, with the author showing increasing understanding of and appreciation for our community . . . Wild Life is the quintessential popular scientific book about the One Plan approach to species conservation."

"Should the goal of conservation efforts be the preservation of endangered species in their natural state, in an environment free of human intervention? Or is it legitimate to conserve vanishing animals in captivity—ex situ—even if this means that some species will depend entirely on the kindness of zookeepers for their continued survival? Examining this issue in fine detail, Irus Braverman posed this question to more than 120 biologists, zoo professionals, government officials, and conservation workers . . . What becomes evident is that there is neither a sharp bifurcation between wild and captive nor a linear continuum with wild nature at one end and managed nature at the other. Like it or not, human intervention has now become an inescapable element in what we mean by 'wild.'"

"As I've bounced back and forth between Munich and Santa Barbara over the last 20 years, my reverence for our uniquely American 'wilderness' has deepened. Lately, this allegiance to that American romantic ideal of nature with its pristine wildernesses took a beating as I read Irus Braverman's searing analysis of 21st-century conservation: Wild Life: The Institution of Nature (2015). . . . Braverman's research shows we're already far past the dream of actually 'saving' so much pure wilderness—our romanticized American view of wild 'nature' is misleading and outdated."

"Braverman's commitment, equally expressed throughout her book, is to the organisms and populations that are rendered killable in the name of vitality. The less valuable lives let die or killed, whether as surplus, as not-wild-enough, as releasable-to-the-wild-even-if-they-will-die, as better-dead-than-captive, as experimental, as competitor, and so on. The book overflows with stories of animals that are killed in the name of life."

"The stories Braverman tells about what wildlife conservationists think they are doing, and how puzzling some of their behavior is, and how conflicted they are about the unnaturalness of some of the natures they are creating are quite compelling even absent a layering of Foucaldian deconstruction."

"Like any good ethnography, Wild Life reveals dysfunctions, prejudices, habits, and conflicts underlying the straightforward, objective ecological science that we might desire."

"Ms. Braverman has written a book that challenges the reader's beliefs on every page, stimulates so much thought, and creates so many 'aha!' moments that I wished it was twice as long . . . Through Wild Life, Irus Braverman excellently traces the shapes of the debates and brings to light a side of conservation that needs to be understood. In a very real way, the fate of so many lives on our planet hinges on these issues."

"With its substantial ballast in real life and practice, Wild Life offers a nicely grounded look at the contrast between the hardened ideology of conservation and its increasingly fluid and creative applications."

"Though Braverman engages in detailed discussion of complex philosophical, legal, and analytical issues, she keeps the book readable by separating these discussions with illustrative vignettes about specific conservation successes and failures. This rich referenced book will be especially useful for those interested in the current state of conservation biology . . . Highly recommended."

"In Braverman's intriguing account, we learn that to bring the red wolf back from the brink, conservationists in the US regularly sneaked a few wolf puppies out of litters born in the wild, replacing them with cubs born in captivity to maintain genetic diversity in the population....The side of human nature that Braverman illuminates – the one that values other lives, and tries to preserve them – might be a better version of 'nature' than most."

silive.com
Blurring the lines between wilderness and captivity

UB Reporter
Where the Wild Things Are?