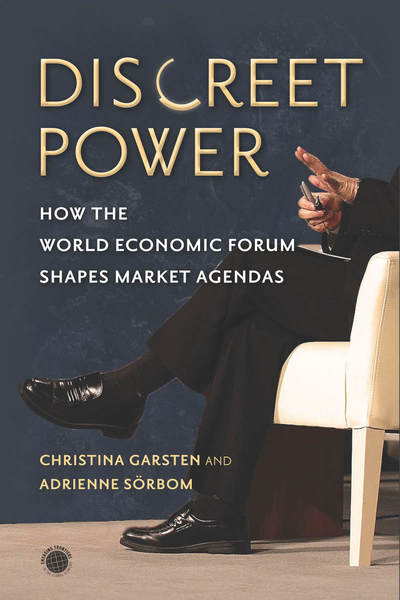 In Discreet Power, Christina Garsten and Adrienne Sörbom undertake an ethnographic study of the World Economic Forum (WEF). Accessing one of the primary agenda-setting organizations of our day, they draw on interviews and participant observation to examine how the WEF wields its influence. They situate the WEF within an emerging system of "discretionary governance," in which actors craft ideas and entice formal authorities and top leaders in order to garner significant sway. Yet in spite of its image as a powerful, exclusive brain trust, the WEF has no formal mandate to implement its positions. It must convince others to advance chosen causes and enact suggestions, rendering its position quite fragile.

Garsten and Sörbom argue that the WEF must be viewed relationally as a brokering organization that lives between the market and political spheres and that extends its reach through associated individuals and groups.They place the WEF in the context of a broader shift, arguing that while this type of governance opens up novel ways of dealing with urgent global problems, it challenges core democratic values.

Christina Garsten is Professor of Social Anthropology at Stockholm University. She is the author of Workplace Vagabonds (2008).

Adrienne Sörbom is Associate Professor of Sociology at Stockholm University.

"Between raw forces of the global economy and disordered world politics lie organizations that are neither political nor economic. The World Economic Forum is central among these structures. Garsten and Sörbom give a most impressive depiction and analysis of its role—responsible but undemocratic—in what is now called global governance."

"This is an outstanding exemplar of a very difficult genre in the craft of ethnography: working within the highest reaches of elite organization. The challenge lies less in limited access than in not reinforcing our deep-seated stereotypes of what goes on in such groups. This work is distinguished by its observational quality and derived expression of the stakes and issues at hand."