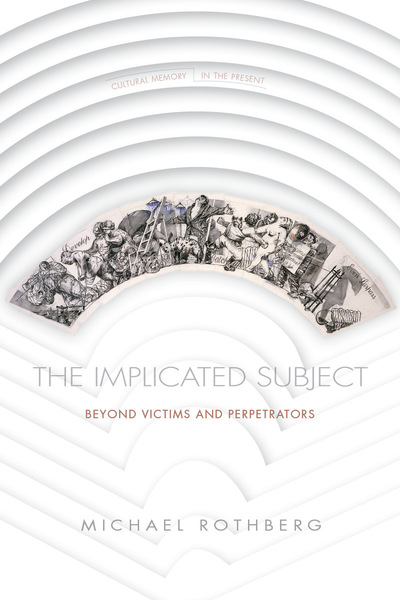 The Implicated Subject
Beyond Victims and Perpetrators
Michael Rothberg
SERIES: Cultural Memory in the Present

When it comes to historical violence and contemporary inequality, none of us are completely innocent. We may not be direct agents of harm, but we may still contribute to, inhabit, or benefit from regimes of domination that we neither set up nor control. Arguing that the familiar categories of victim, perpetrator, and bystander do not adequately account for our connection to injustices past and present, Michael Rothberg offers a new theory of political responsibility through the figure of the implicated subject. The Implicated Subject builds on the comparative, transnational framework of Rothberg's influential work on memory to engage in reflection and analysis of cultural texts, archives, and activist movements from such contested zones as transitional South Africa, contemporary Israel/Palestine, post-Holocaust Europe, and a transatlantic realm marked by the afterlives of slavery. As these diverse sites of inquiry indicate, the processes and histories illuminated by implicated subjectivity are legion in our interconnected world. An array of globally prominent artists, writers, and thinkers—from William Kentridge, Hito Steyerl, and Jamaica Kincaid, to Hannah Arendt, Primo Levi, Judith Butler, and the Combahee River Collective—speak to this interconnection and show how confronting our own implication in difficult histories can lead to new forms of internationalism and long-distance solidarity.

Michael Rothberg is Professor of English and Comparative Literature and 1939 Society Samuel Goetz Chair in Holocaust Studies at the University of California, Los Angeles.

"A significant work by a major scholar with a well-deserved international reputation, The Implicated Subject develops a new and necessary conceptual vocabulary for the conflicting histories of our world. While drawing on a global range of histories and texts, the book never loses focus on the contemporary moment."

"A pathbreaking meditation on the politics and ethics of remembrance in our time, The Implicated Subject shifts the discussion in a variety of disciplines from the dated notions of guilt and innocence to the complexities of responsibility and accountability. This is imperative reading for our age of muddled categories and retreat from personal and scholarly engagement."

"My students and I have been waiting for this book. Offering a fresh vocabulary to confront our personal and collective responsibility in the face of massive political violence, past and present, The Implicated Subject is sure to advance the conversation. Its stakes are as high as its thinking is subtle, clear, and persuasive."

"This is a bold project....as we confront a climate catastrophe of global proportions, we must all face the future as implicated subjects."

"Rothberg's strength lies in his remarkable ability to explain complicated theoretical issues in a few sentences, weaving together the political and the ethical, the historical and the aesthetic....[This is a] brilliant and courageous discussion of contemporary political identity. I have no doubt that this book will become, much like Rothberg's previous work, Multidirectional Memory, a basic reference for students of our interregnum world."

"This is a notable book that will reconfigure debates over memory and power."

"[The] term 'implicated subject' is a valuable contribution to the vocabulary of human rights and should be immediately adopted for use across a variety of disciplines, from political science and philosophy to history and economics."

"[Rothberg] avoids the charged terms guilt and morality in order to attain a fresh perspective onto why people of various historical and cultural contexts participate in wrongdoing, even in spite of knowing better. Such a fresh perspective is urgently needed in order to move beyond a mere naming, blaming, and singling out of culprits, towards any analysis of the complexity of involvements."

"As is often the case with the best academic work, The Implicated Subject takes something that had hitherto sat in a theoretical blind-spot and, through clear description and incisive discussion of examples, makes that concept seem rather obvious in hindsight....[It] will make an immediate impact on, and a valuable supplement to, academic work addressing issues of perpetration and complicity."

"After coining the groundbreaking notion of multidirectional memory, Rothberg's The Implicated Subject is another crucial contribution to the scholarship on memory studies....Undoubtedly, the notions of implicated subject and implication provide scholars with precious tools to complicate the study of the roles of a wide range of transnational social actors and groups who, at different levels, directly or indirectly engaged contexts where human atrocities were committed."

Book of the Week