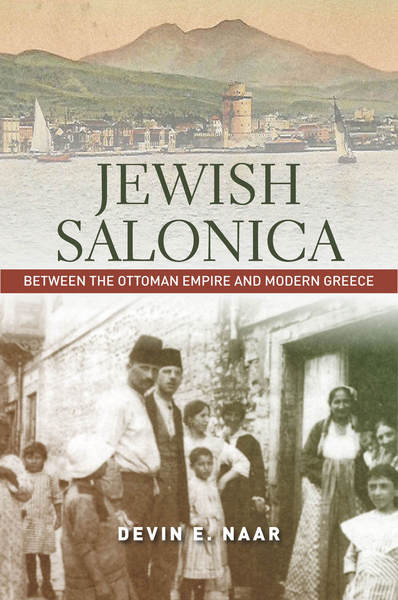 Winner of the 2016 National Jewish Book Awards in the category of Writing Based on Archival Material, sponsored by the Jewish Book Council.

Finalist for the 2016 National Jewish Book Awards in the category of Sephardic Culture, sponsored by the Jewish Book Council.

Touted as the "Jerusalem of the Balkans," the Mediterranean port city of Salonica (Thessaloniki) was once home to the largest Sephardic Jewish community in the world. The collapse of the Ottoman Empire and the city's incorporation into Greece in 1912 provoked a major upheaval that compelled Salonica's Jews to reimagine their community and status as citizens of a nation-state. Jewish Salonica is the first book to tell the story of this tumultuous transition through the voices and perspectives of Salonican Jews as they forged a new place for themselves in Greek society.

Devin E. Naar traveled the globe, from New York to Salonica, Jerusalem, and Moscow, to excavate archives once confiscated by the Nazis. Written in Ladino, Greek, French, and Hebrew, these archives, combined with local newspapers, reveal how Salonica's Jews fashioned a new hybrid identity as Hellenic Jews during a period marked by rising nationalism and economic crisis as well as unprecedented Jewish cultural and political vibrancy. Salonica's Jews—Zionists, assimilationists, and socialists—reinvigorated their connection to the city and claimed it as their own until the Holocaust. Through the case of Salonica's Jews, Naar recovers the diverse experiences of a lost religious, linguistic, and national minority at the crossroads of Europe and the Middle East.

Devin E. Naar is the Isaac Alhadeff Professor of Sephardic Studies and Associate Professor of History and Jewish Studies at the University of Washington.

"A vital contribution to Sephardic history, Devin Naar's book lovingly but objectively fills in the Greek Jewish story of the interwar period. Jewish Salonica speaks through the words of its subjects, drawing on a dazzling array of local Jewish sources and casting this understudied period in a wholly new and dynamic light."

"Richly documented and a pleasure to read, this study offers a compelling account of how the Sephardic Jews of Salonica experienced the transition from being subjects of the multi-ethnic, multi-religious Ottoman empire to living as a minority in the Greek nation-state. A must-read for anyone interested in the history of this unique community."

—Matthias Lehmann, University of California, Irvine, and author of Emissaries from the Holy Land

"[Devin Naar] has achieved something of signal importance with this volume. He has assembled a uniquely detailed profile of a leading Sephardic community under the Ottoman Empire and the succeeding Greek national state out of archives in Russia, Greece, Israel, the United States, and Spain."

"But Naar has not written a standard chronological history; rather, his study is a deep analysis of the Jewish community and its various components that proudly faced the challenges of the shift from a favored Ottoman millet to a beleaguered—both internally and externally—community in serious decline."

"[Jewish Salonica] clearly contributes to our store of knowledge on the relationship between the transition from a multicultural empire to a homogenous nation- state, as well as on the changing meanings of such concepts as Sephardic, Jewish, community, self-governance, autonomy, the modern state, Ottoman, Greek, and Turk in the age of competing nationalisms."

"Naar by all means has successfully created more than a dignified memento to those [Salonican Jews] who perished [in the Holocaust], providing a significant and appealing scholarly contribution to Jewish studies, intellectual history, and identity formation, which will undoubtedly become a reference point for further research."

"Naar's book successfully changes the way we remember the interwar period for Salonican Jewry, from a period of decline to one of creativity in the face of severe obstacles, from imagining them as passive victims, to active agents who sought to perpetuate their role and presence in the ever-changing city as they attempted to find a space for themselves as 'part of Greece without relinquishing their Jewishness,' as Hellenic Jews, a dual status preserved from the Ottoman era."

"Naar's innovative book constitutes a substantial contribution to the Sephardi studies and fills countless gaps, specifically with respect to Salonica under Greek rule. Naar's longing to his ancestral city... did not diminish from his ability to precisely draw the image of this important and divided community in the eve of its existence, while stressing the liveliness and vitality expressed by this community and its institutions until transported to death."

"Jewish Salonica is an excellent book that invites broader discussions about ruptures and continuities between empires and nation-states. It highlights how minority groups refashion themselves during these transitions by inventing new strategies to negotiate their boundaries, redefine their identities, and protect their space with the aim of preserving the interests of their communities and preventing their decline. Jewish Salonica is a major contribution not only to Jewish history and Sephardic studies but also to Mediterranean, European, postcolonial, human rights, Ottoman, and Middle Eastern studies. It will be of great use for scholars, students, historians, and policy makers interested in understanding the complexities of empires and nation-states and the status and rights of minorities within these contexts."

"Drawing on untapped community archives dispersed around the world as well as extensive Judeo-Spanish newspapers and memoirs, Naar's book is a key contribution to the history of Sephardi Jews and a timely intervention in debates about the post-Ottoman "unmixing of peoples" in the era of the nation-state....Thanks to Naar's exhaustive and creative efforts, the community's transformation and mobilization as simultaneously flourishing and struggling is fleshed out in a fascinating and inviting narrative"

"Captivating and riveting....[Naar] sets out to give the Jews of Salonica/Thessaloniki a voice, to understand them from the inside, to grapple with their trials and tribulations to evidence their agency, collectively, and individually in the face of change and growing adversity."

The Sephardic Jewish Brotherhood of America Celebrates Its Centennial

Tablet
Removing the Shroud of Oblivion