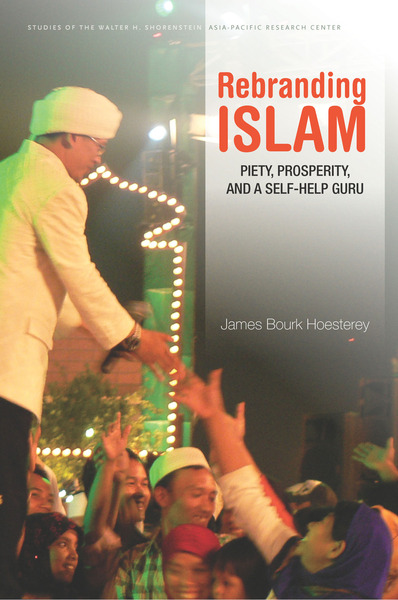 Kyai Haji Abdullah Gymnastiar, known affectionately by Indonesians as "Aa Gym" (elder brother Gym), rose to fame via nationally televised sermons, best-selling books, and corporate training seminars. In Rebranding Islam James B. Hoesterey draws on two years' study of this charismatic leader and his message of Sufi ideas blended with Western pop psychology and management theory to examine new trends in the religious and economic desires of an aspiring middle class, the political predicaments bridging self and state, and the broader themes of religious authority, economic globalization, and the end(s) of political Islam.

At Gymnastiar's Islamic school, television studios, and MQ Training complex, Hoesterey observed this charismatic preacher developing a training regimen called Manajemen Qolbu into Indonesia's leading self-help program via nationally televised sermons, best-selling books, and corporate training seminars. Hoesterey's analysis explains how Gymnastiar articulated and mobilized Islamic idioms of ethics and affect as a way to offer self-help solutions for Indonesia's moral, economic, and political problems. Hoesterey then shows how, after Aa Gym's fall, the former celebrity guru was eclipsed by other television preachers in what is the ever-changing mosaic of Islam in Indonesia. Although Rebranding Islam tells the story of one man, it is also an anthropology of Islamic psychology.

James B. Hoesterey is Assistant Professor of Religion at Emory University.

"Rebranding Islam represents a study that transcends conventional scholarly approaches in grasping the dynamics of religious life in Indonesia . . . These and other theoretical questions the book provokes attest to its analytical richness inviting the reader to rethink the ways Islamic developments in Indonesia have been investigated so far . . . In short, the book is a must-read for scholars and students of Indonesian Islam, as well as highly recommended for a wider scholarly audience interested in the transformation of religion in the contemporary era at large."

"This work is quite simply one of the best written, theoretically well-informed, and downright interesting works in both anthropology and religious studies that I have read in the past four years. It speaks engagingly across a variety of disciplines and debates, including Islamic studies of contemporary Sufism and sociological and political science studies of Islam's crisis of religious authority. I can think of no other work that achieves this work's balance of readability and theoretical depth."

"Rebranding Islam is a welcome and overdue response to analyses of political Islam that focus on either violence or voting as the only two modes of political expression in the 21st century. By analyzing the vibrant styles of Islamic political communication in Indonesia, the world's largest majority-Muslim country, Hoesterey powerfully and singularly broadens our questions. This book should challenge assumptions that undergird pernicious claims about the incompatibility of Islamic piety and democratic politics."

"The story of Aa Gym holds many lessons on the interface between globalization, marketing, and religious authority in the contemporary Muslim world. James Hoesterey's stunning ethnography is much more than just a superb account of religious life in the world's largest Muslim nation; his work also identifies broader trends around the political economy and sociology of Islamic knowledge that are relevant to many settings today."

"Hoesterey provides a fascinating perspective on contemporary Indonesian society and politics. [The book] will be of interest to and enjoyed by anyone with an interest in contemporary Indonesia, Islam, political and religious authority, gender relations, and the growing middle class. Students will find it a gripping read as they follow the rise and fall of a celebrity preacher and his marketing empire."

"In this well written ethnography, Hoesterey places the fascinating story of the "rise and fall" of a popular Muslim televangelist (or "tele-dai") in the broader context of contemporary anthropological and religious studies, debates about spiritual authority, Muslim subjectivity, and the politics of public piety...The book is well-suited for courses at the undergraduate and graduate level on religion, anthropology, comparative politics, gender, and Southeast Asian studies."

"[T]he book provides important and fascinating insights into the complex ways Muslim practitioners in a particular local and historical context use globalizing discourses as a lens through which their own religious traditions are being reread, and vice versa."

"Contemporary Indonesian Muslims are accustomed to the fluid uptake of popular cultural forms and ideas by Islamic mediators. These processes of appropriation and adaption have emerged roughly simultaneously among Muslim populations in many parts of the world. Rebranding Islam is an engrossing and beautifully researched study of an individual who achieved enormous success and publicity through such appropriations...The book is essential reading for observers of Indonesian Islam as well as scholars of popular Islam in other countries."

"The author deserves much credit for the strong foundation of anthropological data that characterizes this book.Rebranding Islamis also a notable contribution to the literature on religious commodification in Indonesia....This book is suitable for both undergraduates and graduate students seeking an understanding of alternative sources of religious authority in Indonesia....For non-specialists, this book is source of data on an important personality in the early post-Soeharto Indonesia. Its data will be valuable for scholars seeking to compare Aa Gym's Management Qalbu business network with similar religious business networks in Indonesia."

"Rebranding Islam is a fascinating, well-written book that will make its mark on the scholarship of Islam, anthropology, religious studies, and Indonesia, but it should also be of interest to a wider audience. Like some of the other important work on Islam that has appeared in recent years, it vividly demonstrates how Islam in the modern world can be commodified, marketed, and consumed by a media-hungry public, blurring the lines between what we might call religion and the culture of global capitalism."

James Hoesterey's account of the rise and fall Aa Gym—Indonesia's most famous Muslim television preacher, or tele-dai, during the 2000s—speaks directly to questions concerning the public sphere, and particularly the fragmentation of Islamic authority in Indonesia and globally during the past few decades....Hoesterey offers fascinating insights into the social organization of a wide-ranging corporate enterprise and public engagement grounded in a relationship with an adoring and admiring public."

—Johan Lindquist, Anthropology of This Century

"The product of James Hoesterey's impressive ethnographic work with a popular preacher, the book chronicles the rise and fall of a leader and his national transformation of religious authority, Muslim subjectivity, and public piety....Rebranding Islam will be of interest...primarily for its demonstration of contemporary charismatic leadership and the reach of New Age self-help and science outside of the United States. More broadly, it is a good source for scholars working on questions concerning the interdependency of economics, socio-politics, and religious authority."

"[T]his is a rich piece of scholarship, with layered analysis and solid insights; it deserves serious reading."

"Hoesterey draws from a rich fountain of sources and research....This book has a lot to offer and is appropriate for scholars and graduate students across a variety of fields, including anthropology, political science, religious studies, and sociology. Hoesterey's analysis engages in a number of important debates around the fragmentation and diversification of religious authority; the definition and evolution of political Islam; and the influence of neoliberalism. His contributions, especially the concept of faith brands, open the door for considerable discussion and research."

"James Bourk Hoesterey's Rebranding Islam: Piety, Prosperity, and a Self-Help Guru is an incisive analysis of the formation of religious authority, Islamic subjectivities, and politics in post-authoritarian Indonesia...Hoesterey reveals a type of political Islam beyond the creation of an Islamic State, and its ability to exist within a democracy. He complicates the composition of subjectivities and helps us reconsider the way in which genealogies of knowledge, such as psychological knowledge, and practice create religious authority that cannot be reduced to Western or Islamic roots."

"Thanks to Hoesterey's access to Aa Gym's inner circle, he is able to offer a fascinating account of both his shining moments and his darkest hours....Hoesterey presents his acute observations in smooth prose, putting the reader in the driver's seat most of the time. This useful book could be used for undergraduate religion or anthropology classes, for graduate-level religion and media classes, or for comparative studies."