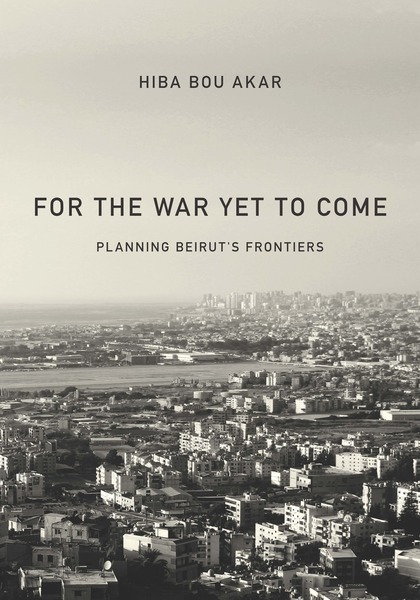 Beirut is a city divided. Following the Green Line of the civil war, dividing the Christian east and the Muslim west, today hundreds of such lines dissect the city. For the residents of Beirut, urban planning could hold promise: a new spatial order could bring a peaceful future. But with unclear state structures and outsourced public processes, urban planning has instead become a contest between religious-political organizations and profit-seeking developers. Neighborhoods reproduce poverty, displacement, and urban violence.

For the War Yet to Come examines urban planning in three neighborhoods of Beirut's southeastern peripheries, revealing how these areas have been developed into frontiers of a continuing sectarian order. Hiba Bou Akar argues these neighborhoods are arranged, not in the expectation of a bright future, but according to the logic of "the war yet to come": urban planning plays on fears and differences, rumors of war, and paramilitary strategies to organize everyday life. As she shows, war in times of peace is not fought with tanks, artillery, and rifles, but involves a more mundane territorial contest for land and apartment sales, zoning and planning regulations, and infrastructure projects.

Hiba Bou Akar is Assistant Professor in the Graduate School of Architecture, Planning and Preservation at Columbia University. She has also worked as an architect and urban planner in Beirut.

"Once in a while, a book comes along that makes a field of inquiry reconsider its assumptions, categories, and vocabularies. Through elegant ethnography and nuanced theorization, Hiba Bou Akar's For the War Yet to Come gives us a new way of thinking about violence, development, modernity, and ultimately, the city. This city is not just Beirut but rather urban life everywhere."

"For the War Yet to Come upends our conventional notions of center and periphery, of local and transnational, even of war and peace. It takes courage and smarts to navigate these spaces, let alone to write about them. With daring and precision, Hiba Bou Akar proves herself to be a complete master."

—AbdouMaliq Simone, Max Planck Institute for the Study of Religious and Ethnic Diversity

"How do you plan cities when the specter of war is always present? Hiba Bou Akar places 'planning' on its head to show how Beirut has developed to serve a sectarian order. Fascinating, theoretically astute, and empirically rich, For the War Yet to Come enriches our understanding of fragile cities in the Middle East and beyond."

"For the War Yet to Come is a feminist and postcolonial critique of a masculinized geography of urban militarism that favors the spectacular and the sublime. This vision of the city at war is blindingly technological and curiously devoid of people, as if seen from above (perhaps from a fighter jet). Bou Akar's Beirut is peopled, swirling with rumor. It is the site not of anonymized destruction but of calculated and complex construction."

"Bou Akar is able to assess how years of sectarian warfare and conflict have turned Beirut into an arena for competing religious/political parties and groups to seize footholds and influence in the city. [Her] in-depth analysis reveals a painful reality: Beirut's urban planning reflects Lebanon's political factions' acceptance of the inevitable continuation of sectarian violence and human displacement."

"Hiba Bou Akar's For the War Yet to Come is an important contribution, shedding light on urban planning in unstable contexts....I highly recommend this book to readers interested in further understanding how urban planning could be viewed as a sword with two edges, for consensus or conflict building."

"Hiba Bou Akar convincingly reveals the considerable weight of the anticipation of war and violence in the production of urban geographies in one emblematic contested city, Beirut. She names this phenomenon 'the war yet to come.' The mechanisms she skillfully describes are profoundly anchored in the urban dynamics of this city but could also be easily found in other cities....an enormous effort that succeeds in describing how fear of 'the war yet to come' is profoundly affecting urban and territorial dynamics in the contested suburbs of Beirut."

"For the War Yet to Come is an incredibly brave book. It would have required enormous courage, fortitude, inventiveness and discipline in order to engage the sites and actors of this book—municipal officials, street-level bureaucrats, bankers, housing developers, landowners, draughtsmen in public and private planning agencies, police officers, militiamen, religious charity workers and even asphalt company employees. Instead of being overwhelmed with rumours, impressions and partial understandings, the book resounds with confidence and clarity."

"In the literature on urban development, Beirut takes on symbolic significance as a prefigurement for cities where political difference is assumed to be primordial and inherent. In contrast to this assumption, Bou Akar's focus on 'everyday sectarianism,' located in 'zones of awkward engagement' between people, and between people and place, has shown sectarianism to be spatially and temporally produced and contingent."

"[With] the theoretically astute concept of 'the war yet to come'....Bou Akar masterfully weaves a spatial and temporal logic together to demonstrate how these territorial contestations are both a reconfiguration of past violence and a patchwork of destruction, construction, lavishness and poverty, otherness and marginality."

"Bou Akar's work is a fascinating study of how planning is discussed and practiced in contexts of conflict. Furthermore, her analysis provides a compelling example of the way that contestations over identity have important spatial dimensions.This book is vital reading not only for anyone who wants to better understand sectarian politics in Lebanon but also for anyone interested in the interplay of conflict and planning in urban spaces across the region and the globe."

"For the War Yet to Come makes an important contribution to urban studies, to be sure. Moreover, while the book is in strong dialogue with the already rich scholarship of planning and politics in Lebanon, its insights apply more broadly to contexts of urban political conflict well beyond Beirut and the Arab world"

"Bou Akar makes an essential contribution to the urban studies and planning fields....Her analysis of Beirut's planning political economy is fascinating and insightful."

"Bou Akar writes in elegant, clear prose and the book, with its empirical richness and thoughtful theoretical discussion of the social and temporal construction of space, should find a keen audience among students and scholars in urban studies interested in cities in conflict and, most obviously, urban contexts in the Middle East."

The Search for Hope

Society and Space
Urban Interventions for the Wars Yet to Come

Middle East Research and Information Project (MERIP)
Interview: For the War Yet to Come

Jadaliyya
Alumni Books Podcast: For the War Yet to Come