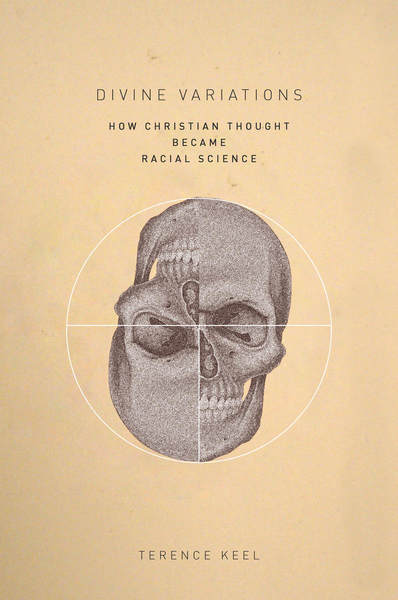 Winner of the 2021 The Iris Award, sponsored by the Center for Religion and the Human at Indiana University.

Divine Variations offers a new account of the development of scientific ideas about race. Focusing on the production of scientific knowledge over the last three centuries, Terence Keel uncovers the persistent links between pre-modern Christian thought and contemporary scientific perceptions of human difference. He argues that, instead of a rupture between religion and modern biology on the question of human origins, modern scientific theories of race are, in fact, an extension of Christian intellectual history.

Keel's study draws on ancient and early modern theological texts and biblical commentaries, works in Christian natural philosophy, seminal studies in ethnology and early social science, debates within twentieth-century public health research, and recent genetic analysis of population differences and ancient human DNA. From these sources, Keel demonstrates that Christian ideas about creation, ancestry, and universalism helped form the basis of modern scientific accounts of human diversity—despite the ostensible shift in modern biology towards scientific naturalism, objectivity, and value neutrality. By showing the connections between Christian thought and scientific racial thinking, this book calls into question the notion that science and religion are mutually exclusive intellectual domains and proposes that the advance of modern science did not follow a linear process of secularization.

Terence Keel is Associate Professor at the University of California, Los Angeles, in the UCLA Institute for Society and Genetics, and in the Department of African American Studies.

"Divine Variations brilliantly traces the roots of modern racial science to Christian intellectual history and ideology. Despite the efforts of genomic researchers to portray current biological concepts of race as purely scientific, Keel shows that these scientists are secular creationists retelling religious folklore about the origins of human life. This book is a crucial contribution to the history of racial science."

"At a moment when some evolutionary theorists have become quasi-theologians, offering universal stories of existence that are as imperialistic as their eighteenth- and nineteenth- century versions, and when popular DNA speculations about racial heritage and legacy have brought us back to the door of eugenics, Keel's book reminds us of the theological trajectories from which these concepts arise. This is not an anti-science text, but one that shows us the interrelationship of theology and science and tacit assumptions behind the scientific will to universalize. We will never be able to defeat racial reasoning so long as it is concealed and nurtured in certain kinds of scientific reasoning. Keel's book greatly aids us in separating the two."

—Willie James Jennings, author of The Christian Imagination: Theology and the Origins of Race

"The brilliance of Terence Keel's book is to show that when it comes to race, there was no war between science and religion. Instead, this engaging and penetrating study shows how Christian ideas helped create scientific approaches to and explanations of race. Divine Variations is a must-read for all scholars of race, religion, and science."

—Edward J. Blum, co-author of The Color of Christ: The Son of God and the Saga of Race in America

"In this brilliantly argued and fascinating account of the development of scientific racial theory, Keel convincingly demonstrates that the modern biological sciences still bear the deep imprint of their religious origins. Divine Variations offers us insightful new ways of thinking about the historical relations between science and religion."

—Peter Harrison, author of The Territories of Science and Religion

"Terence Keel's book brings needed nuance to the cultural and scientific history of the study of human diversity. He explores the connections between the theology and science of what eventually became human microevolution, and follows the various threads down to the present day. This is an important body of scholarship, with which anyone interested in the scientific origins of human racial theory must engage."

—Jonathan Marks, author of What it Means to be 98% Chimpanzee: Apes, People and Their Genes

"Terence Keel's Divine Variations points us to the materials, the old patterns and the stitches that built our modern notion of race.... Keel's work offers us a warning that there is no panacea, no easy ideology or system that is free from the colonial theologies or so called "enlightened" philosophies. But in the face of this, and in the midst of a world where we are confronted by ever more differences and unknowns, perhaps our hope is best oriented towards theologies and scientific modes of thought that do not try to avoid the mystery, that do not wash out or totalize exceptions. Perhaps we no longer need "theories of everything" but rather theologies and science that help us to see variation, difference, and change as possibilities rather than as dangers. Keel's work is a vital step toward this endeavor."

"This volume is a critical contribution to study of the concept of race and a formidable challenge to many commonplace assumptions. Equally important, it compels the reader to reevaluate the extent to which science and religion are clearly distinct realms of thought, and offers new ways of thinking about their relationship....Summing up: Essential."

"Our longing to know where we came from and what lies ahead is fierce. But what if neither science nor religion can offer those comforts?...What I find most gripping about Keel's argument is that he does not denigrate either discipline so much as he goads us to acknowledge their shared problematic epistemological impulse."

—Michelle Wolff, The Journal of Religion

"[Divine Variations] offers an original and ambitious interpretation of science and religion, one that largely avoids framing these interactions in terms of conflict or compatibility, to address a very timely subject: race."

"It is widely appreciated that current struggles over race and racism are crucially shaped by the history of racism....Terence Keel masterfully demonstrates how this is true not only with respect to the legacy of historical racism on ongoing racialized inequality; it is also manifest in how modern scientific approaches to race have been informed by religious conceptions."

"[Keel] overturns assumptions of an inherent conflict between religion and science by showing that modern Western science borrows ideas and questions from Christianity."

"[It] is de rigueur to speak of the modern concept of 'race' as solely a product of enlightenment-era scientific thought....It is here that Terence Keel enters the fray and forcefully disrupts the narrative....While the cult of racial essentialism continues to attract new acolytes, Keel's apocrypha certainly threatens its newfound articles of faith."

"Divine Variations shows that Christianity represents a dominant paradigm for many ways of knowing, and thus its presence in racial science is not unusual but actually expected."

—Ayah Nuriddin, Journal of the History of Medicine and Allied Sciences

"Keel's framework opens up a new way of looking at the problem of race, and a way to account for the role of both Western science and Christian supremacy in the global work of enslavement, the creation of plantation economies, and the violence of settler colonialism....Divine Variations is a pioneering effort in the historical study of race and racism, as well as science and religion."

"Keel provides strong historical evidence for the view that science and religion are to be seen as two cultural efforts that need to be related in much more diverse and complicated ways than is usually accepted....Divine Variations is a book that must be considered by historians, philosophers and scientists alike."

"Keel's work masterfully shows how both Christian theology and modern science are implicated in the racialization project."

The ancestor's blind spot: On race, science and Christian thought.

This is Hell!
Recommended