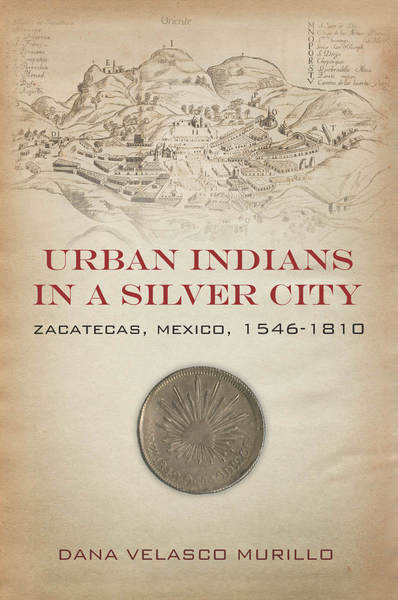 In the sixteenth century, silver mined by native peoples became New Spain's most important export. Silver production served as a catalyst for northern expansion, creating mining towns that led to the development of new industries, markets, population clusters, and frontier institutions. Within these towns, the need for labor, raw materials, resources, and foodstuffs brought together an array of different ethnic and social groups—Spaniards, Indians, Africans, and ethnically mixed individuals or castas. On the northern edge of the empire, 350 miles from Mexico City, sprung up Zacatecas, a silver-mining town that would grow in prominence to become the "Second City of New Spain."

Urban Indians in a Silver City illuminates the social footprint of colonial Mexico's silver mining district. It reveals the men, women, children, and families that shaped indigenous society and shifts the view of indigenous peoples from mere laborers to settlers and vecinos (municipal residents). Dana Velasco Murillo shows how native peoples exploited the urban milieu to create multiple statuses and identities that allowed them to live in Zacatecas as both Indians and vecinos. In reconsidering traditional paradigms about ethnicity and identity among the urban Indian population, she raises larger questions about the nature and rate of cultural change in the Mexican north.

Dana Velasco Murillo is Associate Professor of History at the University of California, San Diego.

"In this essential study of Zacatecas, Dana Velasco Murillo emphasizes the agency of urban indigenous peoples living and working in the ethnically diverse cities of colonial Mexico. Her book ushers us past older stereotypes into a greater understanding of the complex nature of society in a supposedly 'Spanish' mining community."

"As the Spanish authorities attempted to dissolve the institutions that had shaped Indian society, it seems that the indigenous population remained but started to blend in with the rest of Zacatecas's residents. The exposition of this process and its effects on the confraternities and the families are the most compelling and convincing aspects of the book...In short, this book will appeal to historians of indigenous societies, urban Indians, and colonial institutions of governance."

"For its method and scope this is an exemplary source for graduate seminars, and is indispensable for scholars interested in the history of northern Mexico, indigenous movements, urban indigeneities, and comparative indigeneities"

"The book's most important contribution is the author's ability to clearly convey the complex and distinctive growth of migrant indigenous populations who settled in the mining Spanish colonial city of Zacatecas located in the northern periphery of New Spain where over time they developed communities and adopted Spanish institutions to foster and protect their communal political and economic interests...Methodologically, this is a theoretically and historiographically rich social history that relies on Mexican ethnohistory. That scholarship is seamlessly woven into a chronological narrative of a long trajectory of the development of resilient indigenous communities"

"Murillo traces across time the active role that Indians played in the rise of local civic institutions and self-governing pueblos, which helped to define, and sustain, the ethnic status and identities of 'urban Indians' within this colonial mining city....[A] fine scholarly work about Zacatecas' multiracial colonial foundations."

"Nicely written and solidly rooted in secular and ecclesiastical sources,Urban Indians in a Silver City is an important contribution to the understanding of indigenous peoples in a scenario that historians have previously analyzed primarily as significant to colonial economic history....Because of the questions that arise from this book, and because of its indisputable contributions to social history, Urban Indians in a Silver City should be required reading for those historians studying subalternity in colonial Latin America."

"Velasco Murillo's careful reconstitution of the range of acts, relations, and settings that constituted these neighborhoods demonstrates how indigenous peoples could be both Indian and urban....Velasco Murillo's book is as rich and as thorough a study of the urban indigenous experience as one could hope for."