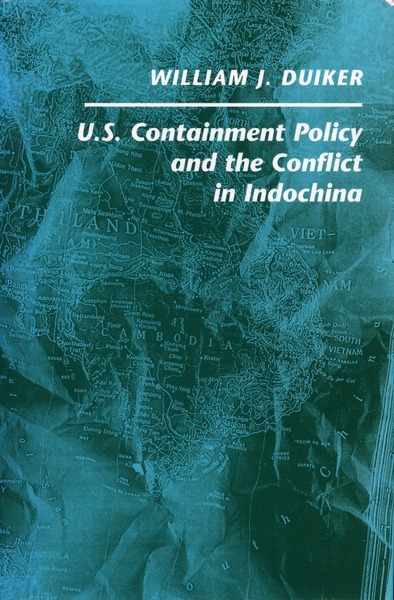 U. S. Containment Policy and the Conflict in Indochina
William J. Duiker

From the end of World War II down to the dissolution of the Soviet Union, the primary objective of U.S. foreign policy has been to prevent the expansion of communism. Indeed, that objective was directly embodied in the so-called strategy of containment, a global approach to the pursuit of U.S. national security interests that was first adumbrated by George F. Kennan in 1947 and later became the guiding force in U.S. foreign policy.

At first, the concept of containment was applied primarily to Europe. It was there that the threat to U.S. interests from international communism directed from Moscow was first perceived, in the form of Soviet efforts to dominate the nations of Eastern Europe and extend Soviet influence into the eastern Mediterranean and the Middle East. Other areas of the world—Asia, Africa, and Latin America—were considered to be less threatened by forces hostile to the free world or more peripheral to U.S. foreign policy concerns. At least that was the view initially proclaimed by George Kennan himself, who identified five areas in the world as vital to the United States: North America, Great Britain, Central Europe, the USSR, and Japan. Only the latter was located in Asia.

By the end of the decade, however, the focus of U.S. containment strategy was extended to include East and Southeast Asia, primarily because of the increasing likelihood of a communist victory in the Chinese Civil War, which, in the minds of some U.S. policymakers, would be tantamount to giving the Soviet Union a dominant position on the Asian mainland. Added to the growing threat in China was the increasingly unstable situation in Southeast Asia, where the long arc of colonies that had been established by the imperialist powers during the last half of the nineteenth century was gradually but inexorably being replaced by independent states. The emergence of such colonial territories into independence was generally viewed as a welcome prospect by foreign policy observers in Washington, but when combined with the impending victory of communist forces in China it raised the unsettling possibility that the entire region might be brought within the reach of the Kremlin.

"Duiker, a former foreign service officer in Saigon in the mid-1960s, is one of the most judicious, tempered, and respected scholars on Vietnam. His six previous books have established his authority, and this is his crowning achievement. . . . The fine narrative and careful, insightful assessments make this book the new standard source for both scholar and novice student alike."

"This is an important book on the growth of U.S. involvement in Vietnam from World War II through the Johnson administration's escalation decisions in mid 1965. . . . What makes this book particularly important . . . is his discussion of the thinking in Hanoi. . . . A sound book, one that deserves an important place in the large and growing body of literature on the Vietnam War."