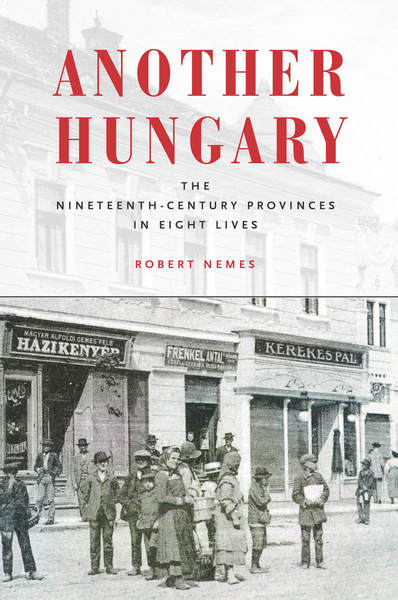 Another Hungary tells the stories of eight remarkable individuals: an aristocrat, merchant, engineer, teacher, journalist, rabbi, tobacconist, and writer. All eight came from the same woebegone corner of prewar Hungary. Their biographies illuminate how the region's residents made sense of economic underdevelopment, ethnic diversity, and relations between Christians and Jews. Taken together, their stories create a unique picture of the troubled history of Eastern Europe, viewed not from the capital cities, but from the small towns and villages.

Through these eight lives, Another Hungary investigates the wider processes that remade Eastern Europe in the nineteenth century. It asks: How did people make sense of the dramatic changes, from the advent of the railroad to the outbreak of the First World War? How did they respond to the army of political ideologies that marched through this region: liberalism, socialism, nationalism, antisemitism, and Zionism? To what extent did people in the provinces not just react to, but influence what was happening in the centers of political power? This collective biography confirms that nineteenth-century Hungary was no earthly paradise. But it also shows that the provinces produced men and women with bold ideas on how to change their world.

Robert Nemes is Associate Professor of History at Colgate University. He is the author of The Once and Future Budapest (2005).

"Another Hungary is a brilliantly conceived and beautifully written collective portrait of eight men and women whose lives capture the complexities and contradictions of modern Hungary in the making. All of them had roots in small provincial towns but were eager to realize their dreams and ambitions on a wider stage. Telling their stories, Robert Nemes compels his readers to reconsider some of the great themes of modern East-Central European history—modernization, 'backwardness,' nationalization, Christian-Jewish relations—from an unexpected perspective and finds insights that are surprising, original, provocative, and often poignant. There is simply no book quite like this."

"Another Hungary is a superbly crafted history that offers readers an absorbing account of rural small town Hungary in the nineteenth century. Robert Nemes displays a genius for elucidating the psychological dynamics of families, of gender relations, of neighborhoods, and of professional and personal rivalries. The book's genius lies in Nemes's skill at capturing the meanings of place in the lives of each of these very different women and men, while showing how they participated in the broad sweep of nineteenth-century social, political, and cultural developments that transformed European societies."

"Another Hungary is a skillful expression of new cultural history. It boldly utilizes diverse sources to develop an alternative historical narrative, which provides profound insights into the social, religious and national transformations of the period."

"[T]his is an intelligent, theoretically informed (but jargon-free) book that makes the most out of the biographical genre, offering, with its eight life stories, a varied read."

"In addition to describing and illustrating the wider social and political phenomena of the nineteenth century,... three of the perspectives of Another Hungary are noteworthy. The first is the already-mentioned importance ascribed to the notion of periphery; the second is related to the relevance of the methods employed; and the third involves the novelty and authenticity of the sources, as well as the prominence of the local ones contained in the study."

"This is an original and illuminating contribution to the history of nineteenth-century Hungary, and in particular provincial Hungary. Through biographies of eight people, all from the northeastern corner of the kingdom, Robert Nemes casts light on the connection between the local and the national....The result is a brilliant series of snapshots of both the provinces and Hungarian society as a whole."

"[B]y breathing new life into them, Nemes has already succeeded in accomplishing the task that some of his subjects had set out to do: He acted as the intermediary between cultures and languages, and introduced these characters, along with a faraway corner of the former Austria-Hungary, to the English-speaking scholarly and general public."