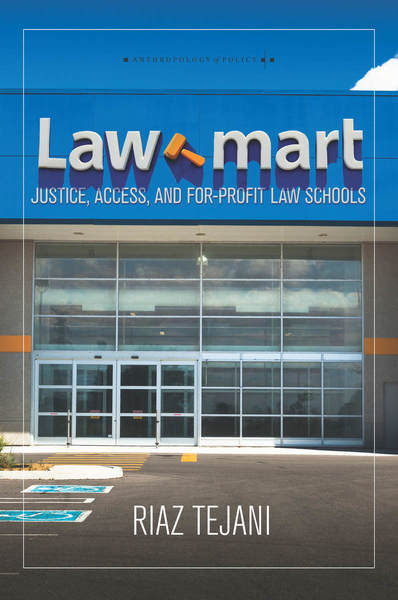 American law schools are in deep crisis. Enrollment is down, student loan debt is up, and the profession's supply of high-paying jobs is shrinking. Meanwhile, thousands of graduates remain underemployed while the legal needs of low-income communities go substantially unmet. Many blame overregulation and seek a "free" market to solve the problem, but this has already been tested. Seizing on a deregulatory policy shift at the American Bar Association, private equity financiers established the first for-profit law schools in the early 2000s with the stated mission to increase access to justice by "serving the underserved". Pursuing this mission at a feverish rate of growth, they offered the promise of professional upward mobility through high-tech, simplified teaching and learning.

In Law Mart, a vivid ethnography of one such environment, Riaz Tejani argues that the rise of for-profit law schools shows the limits of a market-based solution to American access to justice. Building on theories in law, political economy, and moral anthropology, Tejani reveals how for-profit law schools marketed themselves directly to ethnoracial and socioeconomic "minority" communities, relaxed admission standards, increased diversity, shook up established curricula, and saw student success rates plummet. They contributed to a dramatic rise in U.S. law student debt burdens while charging premium tuition financed up-front through federal loans over time. If economic theories have so influenced legal scholarship, what happens when they come to shape law school transactions, governance, and oversight? For students promised professional citizenship by these institutions, is there a need for protections that better uphold institutional quality and sustainability? Offering an unprecedented glimpse of this landscape, Law Mart is a colorful foray into these essential questions.

Riaz Tejani is Assistant Professor of Legal Studies at University of Illinois Springfield.

"Law Mart is a compulsively readable and dark tale of a for-profit law school. The school's stated mission is to provide 'access' and 'innovation' to underserved populations, admitting students with low scores and limited options. Out of sight of students and accreditors is a corporate operation that uses emotional intelligence testing for employees, implements curricular reforms to satisfy nervous investors, and fires and intimidates professors who object to changes they perceive as detrimental to the students. This compelling book raises serious concerns about the permeation of economic imperatives in academia."

"Riaz Tejani regards legal education as integral to the democratization of the legal profession, and to democracy itself. Written from that critical starting point, his account of the blurring of public and private interests in for-profit law schools is both searing and subtle – relevant and accessible to anyone interested in higher education, law and contemporary liberalism."

"Law Mart offers an extremely insightful and smart analysis of for-profit law schools. Tejani's book is a must-read for anyone who cares about the future of the legal profession and its aspirations to make legal education and access to justice a right for all. Given the current conservative political climate of deregulation and laissez-faire capitalism, this book's importance takes on new meaning and significance."

"Tejani's skills as anthropologist and lawyer shine in this incisive account of U.S. for-profit law schools. With deceptive ease, his lucid prose moves us from analyses of the market and the economy, through morality and legal ethics, to deeply-rooted ethnography that takes us into the heart of a malaise in U.S. legal education. This book is a must-read for all those concerned about that malaise."

"Tejani explores the tensions between law, economics, and morality when justice becomes a commodity and higher education is produced en masse. The book weaves narratives and data collected from research on one particular school's operations with analysis of the broader business model's implications across higher education."

"One of the great strengths of Tejani's book is that it is not a simplistic account fo the exploitation of students and academics by financiers seeking egregious profits. Tejani explores how students who would not have qualified for traditional law schools and who would not, on their own, have been able to navigate admissions and financing routes, were helped into law school by New Delta."

"This considered and timely study reveals that the attempt to absorb market-based thinking into higher education is fraught...Tejani shows insightfully how the move towards greater diversity within the student body in legal education is a direct outcome of neoliberalism rather than the manifestation of an increased sensibility in favour of social justice, as it is claimed to be.... In highlighting the contradictions inherent in for-profit law schools, Tejani poses the provocative question of how faculty can fulfill their responsibility of socializing students into ethical legal practice when they are implicated in producing a significant moral hazard....I highly recommend this excellent study as it addresses an issue of vital importance to all of us."

"By exposing the fallacy of for profit legal education for what it is, Law Mart creates a compelling and absorbing narrative of legal education and the failure of oversight methodologies, and is a damning indictment not only of the industry but also the accreditors who claim to regulate it."––Andrew W. Jurs, St. John's Law Review