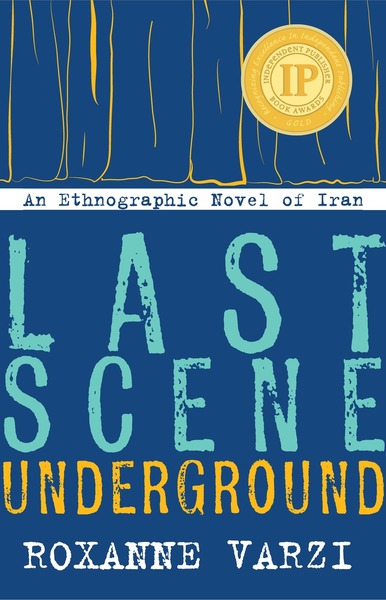 Leili could not have imagined that arriving late to Islamic morals class would change the course of her life. But her arrival catches the eye of a young man, and a chance meeting soon draws Leili into a new circle of friends and artists. Gathering in the cafes of Tehran, these young college students come together to create an underground play that will wake up their generation. They play with fire, literally and figuratively, igniting a drama both personal and political to perform their play—just once.

From the wealthy suburbs and chic coffee shops of Tehran to subterranean spaces teeming with drugs and prostitution to spiritual lodges and saints' tombs in the mountains high above the city, Last Scene Underground presents an Iran rarely seen. Young Tehranis navigate their way through politics, art, and the meaning of home and in the process learn hard lessons about censorship, creativity, and love. Their dangerous discoveries ultimately lead to finding themselves.

Written in the hopeful wake of Iran's Green Movement and against the long shadow of the Iran-Iraq war, this unique novel deepens our understanding of an elusive country that is full of misunderstood contradictions and wonder.

Roxanne Varzi is a professor of anthropology and visual studies at the University of California, Irvine. She is the author of Warring Souls: Media, Martyrdom, and Youth in Post-Revolution Iran (2006). Her award-winning short stories have been published in a number of anthologies and magazines, including the New York Press. Her film, Plastic Flowers Never Die, has been shown in festivals around the world from Bosnia to Boston, and her sound installation, Whole World Blind, has been exhibited in galleries in San Francisco and Berlin and is featured on Public Books. Varzi was born in Tehran and left with her family shortly after the Revolution. In 2000, she was awarded the first Fulbright fellowship since the Islamic Revolution for research in Iran.

"Literary romance and ethnography are joined in perfect dialogue in Last Scene Underground. Roxanne Varzi has written a rare, powerful book that is both a whirlwind story of how it feels to be young and idealistic during the time of the Green Movement, and a pointed reckoning with the state of censorship in Iran today."

"This beautifully written book captures the predicament of every Iranian artist who is conflicted between one's own creative imagination, personal and social responsibilities, and political reality."

"Amazing and wonderful! Roxanne Varzi brings together her own Iranian heritage, excellent ethnographic research, and deep insights—all in a gripping read. In opening a new genre, the ethnographic novel, Varzi conveys the emotions, desires, creativity, and frustrations of so many young people in Iran."

"Last Scene Underground offers a thought-provoking and powerful story about our collective attempts to re-imagine the world. Writing with an inspiring combination of creativity and criticality, Roxanne Varzi has crafted an exceptionally memorable portrait of Iran, bringing both Tehran and its young people to life."

"Varzi plays the role of what the anthropologist Renato Rosaldo has called a positioned observer, trying to make sense of life long after the ethnographer's duty of detailed description has been completed. Clifford Geertz has described creative ethnographers such as Varzi as novelists manqué, and she captures what I elsewhere have theorized as ethnographic surfeit. This surfeit is what remains after an ethnographer has paid dues to the science of empirical social knowledge. What is left is not quite hard data, but nonetheless an invaluable remainder of insight, affect, conversation, and emotion; an entire sensorium, which even if the ethnographer wants to, will not let her go."

A Note to the Reader

Persia Is My Heart