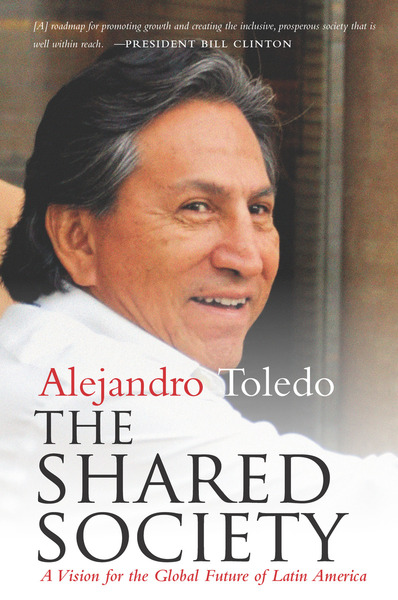 Latin America has gone through a major transformation in the past two decades. According to the United Nations, with the discovery of new oil and mineral deposits and increases in energy exports, manufacturing and tourism, Latin America's economic growth and development will only continue, foreign investment will increase, and the region's global influence will become greater and greater.

This is an historic opportunity for Latin America. Yet, as Stanford economist and former Peruvian President Alejandro Toledo points out in his new book, The Shared Society, social strife threatens to undermine its recent economic and political progress. The specter of unsustainable growth and greed threatens to compromise the environment. Economic growth rates could slow and democracy could deteriorate into familiar forms of authoritarian populism.

In The Shared Society, Toledo, whose tenure as president of Peru helped spur its economic renaissance, develops a plan for a future Latin America in which its population is not only much better off economically than today, but in which the vast 40 percent of Latin America's poor and marginalized are incorporated into a rising middle class, democratic institutions work more effectively, and the extraordinary ecosystem of Latin America is preserved. This is Toledo's vision for a just, sustainable, and prosperous shared society.

To achieve this, Toledo lays out a set of principles and concrete, implementable ideas with which Latin Americans can reinvent themselves as a leading force for change in a continuously globalizing society beset by inequalities and global problems such as climate change and shortages of clean drinkable water, food security, human rights violations and weak democratic institutions. Toledo argues that only extraordinary efforts of vision, determination, courage and inspired leadership will set Latin America on the path to inclusive development, and this book provides a visionary manifesto and blueprint for creating that ideal shared society.

Dr. Alejandro Toledo (Stanford Ph.D) was democratically elected President of Peru in 2001. After finishing his term as President, Toledo returned to Stanford, where he was a Distinguished Fellow in Residence at the University's Center for Advanced Study in the Behavioral Sciences, and also a Payne Distinguished Visiting Lecturer at the Freeman Spogli Institute's Center on Democracy, Development, and the Rule of Law. Simultaneously, Dr. Toledo founded and continues to serve as the President of the Global Center for Development and Democracy in Washington, DC. In 2009–2010 Dr. Toledo was a Distinguished Visiting Scholar at the School of Advanced International Studies at Johns Hopkins University in Washington, D.C., and also a Non-Resident Senior Fellow in Foreign Policy and Global Economy and Development at the Brookings Institution. In recent years, Dr. Toledo has published on policy-oriented academic issues related to Economic Growth, Inclusiveness and Democracy.

"Toledo's book partly trumpets his role, partly describes the Latin American success, and partly tries to project and prescribe for the future. His emphasis on the importance of income distribution and on the growing role of China moves beyond a simple extrapolation of the last 15 years. His vision for Latin America's future is very optimistic, and some elements are realistic . . . Recommended."

"As President of Peru, Alejandro Toledo confronted some of Latin America's biggest challenges. Today, he shares his vision for the region's future, and offers a roadmap for promoting growth and creating the inclusive, prosperous society that is well within reach."

"Alejandro Toledo makes the critical observation that Latin America cannot secure its democracy unless it simultaneously improves the quality of governance and meets the ever-rising expectations of the region's populations. He offers many wise suggestions for how to meet what will be the critical challenge of the 21st century."

"With the benefits of the momentous economic growth experienced by Latin America over recent decades comes the responsibility to promote the rule of Law, safeguard human rights, improve equal access to education and public health, and work towards economic equality. These are the best values for any contemporary democracy and the guiding principles of Alejandro Toledo's economic vision in The Shared Society."