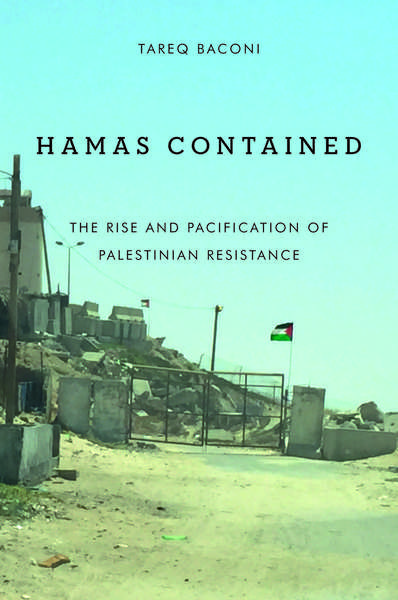 Shortlisted in the 2018 Palestine Book Awards, sponsored by the Middle East Monitor (MEMO).

Hamas rules Gaza and the lives of the two million Palestinians who live there. Demonized in media and policy debates, various accusations and critical assumptions have been used to justify extreme military action against Hamas. The reality of Hamas is, of course, far more complex. Neither a democratic political party nor a terrorist group, Hamas is a multifaceted liberation organization, one rooted in the nationalist claims of the Palestinian people.

Hamas Contained offers the first history of the group on its own terms. Drawing on interviews with organization leaders, as well as publications from the group, Tareq Baconi maps Hamas's thirty-year transition from fringe military resistance towards governance. He breaks new ground in questioning the conventional understanding of Hamas and shows how the movement's ideology ultimately threatens the Palestinian struggle and, inadvertently, its own legitimacy.

Hamas's reliance on armed struggle as a means of liberation has failed in the face of a relentless occupation designed to fragment the Palestinian people. As Baconi argues, under Israel's approach of managing rather than resolving the conflict, Hamas's demand for Palestinian sovereignty has effectively been neutralized by its containment in Gaza. This dynamic has perpetuated a deadlock characterized by its brutality—and one that has made permissible the collective punishment of millions of Palestinian civilians.

Tareq Baconi is a Visiting Scholar at Columbia University's Middle East Institute and a Visiting Fellow at the European Council on Foreign Relations. He received his PhD from Kings College London. His writings have appeared in The Nation, Foreign Affairs, and The Guardian, and he has provided commentary on Middle East affairs to National Public Radio, Democracy Now, and Al Jazeera.

"Groundbreaking, rigorously researched, and strikingly fair-minded, Hamas Contained is essential reading to understand Middle East politics today. Tareq Baconi weaves a counter-narrative, upending common assumptions about the controversial Islamic organization. He persuasively argues that there can be no solution to the Israeli-Palestinian conflict without diplomatic engagement with Hamas."

—Avi Shlaim, author of The Iron Wall: Israel and the Arab World

"Hamas Contained is by far the best book on this vital topic. Meticulous and deeply sourced, this is essential reading for anyone with a serious interest in Hamas, Palestine, Israel, or Islamist political movements anywhere in the Middle East."

—Rashid Khalidi, author of Brokers of Deceit: How the U.S. Has Undermined Peace in the Middle East

"Tareq Baconi has written a detailed and thoughtful book about the history of Hamas and its effect on the Palestinian national movement. Avoiding black and white simplifications, Baconi puts the story of Hamas within its proper context—the tragedy of an occupation."

"Judicious and impartial, this important work adds nuance to the portrait of one of the Middle East's most divisive players."