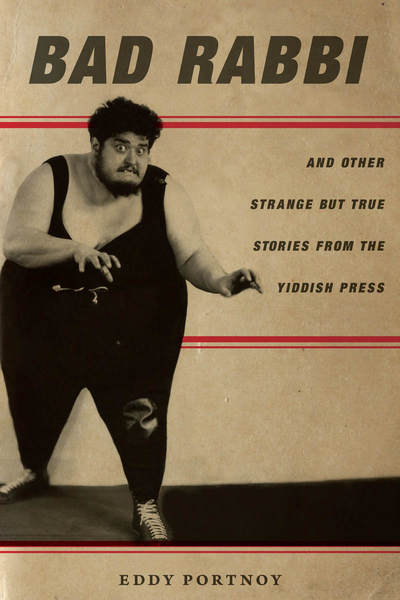 Bad Rabbi
And Other Strange but True Stories from the Yiddish Press
Eddy Portnoy
SERIES: Stanford Studies in Jewish History and Culture

Stories abound of immigrant Jews on the outside looking in, clambering up the ladder of social mobility, successfully assimilating and integrating into their new worlds. But this book is not about the success stories. It's a paean to the bunglers, the blockheads, and the just plain weird—Jews who were flung from small, impoverished eastern European towns into the urban shtetls of New York and Warsaw, where, as they say in Yiddish, their bread landed butter side down in the dirt. These marginal Jews may have found their way into the history books far less frequently than their more socially upstanding neighbors, but there's one place you can find them in force: in the Yiddish newspapers that had their heyday from the 1880s to the 1930s. Disaster, misery, and misfortune: you will find no better chronicle of the daily ignominies of urban Jewish life than in the pages of the Yiddish press.

An underground history of downwardly mobile Jews, Bad Rabbi exposes the seamy underbelly of pre-WWII New York and Warsaw, the two major centers of Yiddish culture in the late nineteenth and early twentieth centuries. With true stories plucked from the pages of the Yiddish papers, Eddy Portnoy introduces us to the drunks, thieves, murderers, wrestlers, poets, and beauty queens whose misadventures were immortalized in print. There's the Polish rabbi blackmailed by an American widow, mass brawls at weddings and funerals, a psychic who specialized in locating missing husbands, and violent gangs of Jewish mothers on the prowl—in short, not quite the Jews you'd expect. One part Isaac Bashevis Singer, one part Jerry Springer, this irreverent, unvarnished, and frequently hilarious compendium of stories provides a window into an unknown Yiddish world that was.

Eddy Portnoy is Senior Researcher and Director of Exhibitions at the YIVO Institute for Jewish Research.

"Eddy Portnoy's Bad Rabbi is an extraordinary thing: a gateway to the lost world of Jewish street life in pre-World War II New York and Warsaw. The Yiddish newspapers Portnoy mines were free from piety and light on decorum; instead they present a vast, roiling canvas of human behavior in all its extremes, from comedy to horror, with fiercely unbuttoned characters declaiming eloquently as stoopside choruses annotated their rants. Portnoy's book is undomesticated history; it is a time machine to an eradicated past; it is pure pleasure."

"Having devoted his misspent youth to combing the Yiddish press for seedy, shady, and shocking stories, Portnoy, the bad boy of Yiddish studies, brings bad rabbis and other miscreants into the light in this erudite and thoroughly entertaining book."

"This fascinating book contains the strangest Jews I've ever met in my life. It should appeal to every history buff out there—Jewish, gentile or otherwise. What's Yiddish for 'Buy this book, or may all your teeth fall out except one to give you a toothache'?"

—A.J. Jacobs, author of The Year of Living Biblically: One Man's Humble Quest to Follow the Bible as Literally as Possible

"Only a historian with the wit and comic sensibility of Eddy Portnoy could succeed in resurrecting these dead and forgotten Jews of New York and Warsaw. Through his painstaking research, we can vicariously experience their desperation and lack of self-control, their strange passions and their various forms of mental illness – predicaments we're just one step away from ourselves."

"Bad Rabbi is a masterful set of finely-tuned scholarship and critical zingers that brings detailed archival history of 'downwardly mobile' nineteenth- and twentieth-century Jews alive through vivid, erudite, and spit-take funny storytelling. Portnoy heads straight for the urban immigrant underbelly, opens up the newspapers, and uses portraits of a vanished people and a vanished culture to not just deliver a bygone way of life, but to explode some of our most dominant conceptions of modern Jewish culture."

"Exuberantly vulgar, blithely unconcerned with gentile opinion, these nuggets of low-class Yiddishism won't let us forget how rough-and-tumble life in Yiddishland really was."

—Michael Wex, author of Born to Kvetch: Yiddish Language and Culture in All of Its Moods

"In the staid world of academic Yiddishists, Eddy Portnoy is a live wire, a funny guy, a mischief-maker, what they used to call in the Catskills, a tummler...Bad Rabbi is a succession of outlandish misadventures, a wild panorama populated by an astonishing array of characters... Yiddish journalists were showboats, garnishing tabloid sensationalism with literary jokes and religious references. (Given this high-low style, as well as its caustic attitudinizing and internal feuds, the Yiddish press seems like a flamboyant forerunner to the old Village Voice.) Such zesty informality carries over into Portnoy's own writing, which, in blending the erudite and vernacular, regularly tilts toward the latter."

"Don't feel guilty chuckling your way through Bad Rabbi as you read about the crazy deeds and commonplace misfortunes of marginal Jews from a century ago. "

—Renee Ghert-Zand, The Times of Israel

"Endlessly interesting and entertaining with stories that range from the macabre to the hilarious."

"...Portnoy's rollicking chronicle of Jewish newspaper scandal is an entertaining plunge into unexamined corners of the Jewish past. It is a necessary intervention into Jewish historiography, reorienting the historian's gaze to segments of the newspaper, and of history, that tend to get overlooked in the search for items significant to global politics and literary history. It is also an exemplar of scholarship aimed at lay audiences, with titillating and fast-paced storytelling that nevertheless offers historical depth and grounding."

"Portnoy often adopts the tone of the reportage in the Yiddish press within his own writing. His style is punchy, colorful, and fun to read, allowing his descriptions of news stories from the Yiddish press to intermingle seamlessly with his translations of the original articles that capture their vibrant, engrossing tone...By bringing these stories to light, and narrating them in such a vibrant way, Portnoy highlights the importance of illuminating an element of Yiddish mass culture that served an incredibly important function a century ago, and has been largely forgotten today."

"While Bad Rabbi is a decidedly a work of scholarship, it is also—and fittingly—a surprising and sometimes shocking glimpse of the mishegoss that was eagerly reported in the Yiddish press....[A] book that took chutzpah to write but is a sheer pleasure to read."

"This was a lot of fun....From forgotten front-page news to hidden nuggets in the crime blotter, Bad Rabbi gives modern readers a taste of what urban Jews were gossiping about, challenging our romanticized notions of the shtetl. One hopes this volume will just be the tip of the iceberg and further explorations into the tabloid stories of the headline news that history has forgotten will be forthcoming."

"I find Bad Rabbi by Eddy Portnoy such an unwholesome, overdue joy, filled with uplifting tales of utter moral failure. The book, which began as the author's doctoral dissertation on cartoons in the early Yiddish press, became something else entirely: the revelation of a wonderful underbelly of decidedly imperfect human beings....[W]hat's happening here is the humanizing of a people, the telling of a history that others would rather not be told, a history so often sacrificed to stereotypes, schmalz and false piety."

"The 'two-bit nobodies' to whom Portnoy—a wickedly sparkling writer, by the way—dedicates Bad Rabbi include out-and-out criminals, crazies, eccentrics, hopeless dreamers and aspirant intellectuals. But they all share one thing—failure. Lobbes-dom is a wonderfully rich seam to mine, and mine it Portnoy does, using as excavating tools the unrestrained journalism of ancient file copies of Yiddish newspapers published in Warsaw and New York. I was enchanted by his accounts....Portnoy is a genius at putting the sting at the end of every chapter."

The Good Kind of Schmaltz

Tablet
Bad to the Bone