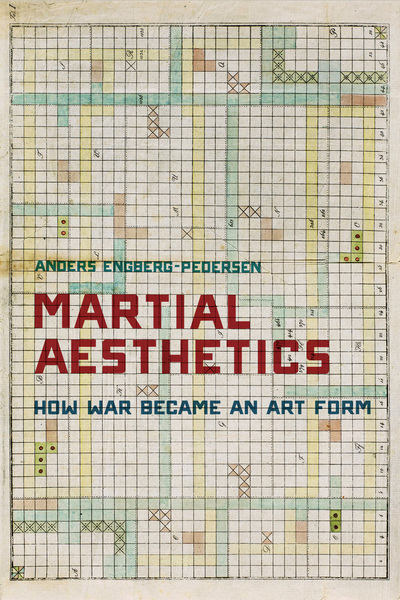 The twenty-first century has witnessed a pervasive militarization of aesthetics with Western military institutions co-opting the creative worldmaking of art and merging it with the destructive forces of warfare.

In Martial Aesthetics, Anders Engberg-Pedersen examines the origins of this unlikely merger, showing that today's creative warfare is merely the extension of a historical development that began long ago. Indeed, the emergence of martial aesthetics harkens back to a series of inventions, ideas, and debates in the eighteenth and early nineteenth century. Already then, military thinkers and inventors adopted ideas from the field of aesthetics about the nature, purpose, and force of art and retooled them into innovative military technologies and a new theory that conceptualized war not merely as a practical art, but as an aesthetic art form. This book shows how military discourses and early war media such as star charts, horoscopes, and the Prussian wargame were entangled with ideas of creativity, genius, and possible worlds in philosophy and aesthetic theory (by thinkers such as Leibniz, Baumgarten, Kant, and Schiller) in order to trace the emergence of martial aesthetics. Adopting an approach that is simultaneously historical and theoretical, Engberg-Pedersen presents a new frame for understanding war in the twenty-first century.

Anders Engberg-Pedersen is Professor of Comparative Literature at The University of Southern Denmark, and Chair of Humanities at the Danish Institute for Advanced Study. He is the author of Empire of Chance: The Napoleonic Wars and the Disorder of Things and editor of numerous volumes on war.

"Beautifully written and compelling, this book digs deep into military doctrine to understand the place of aesthetic cultures within it. Fascinating and disturbing."

"A bold, ambitious, and expansive book."

"Erudite yet wonderfully readable, Martial Aesthetics traces the tangled histories of war and art to offer new insights into the artful design and operation of violence in the modern age. "

—Caren Kaplan, author of Aerial Aftermaths: Wartime from Above