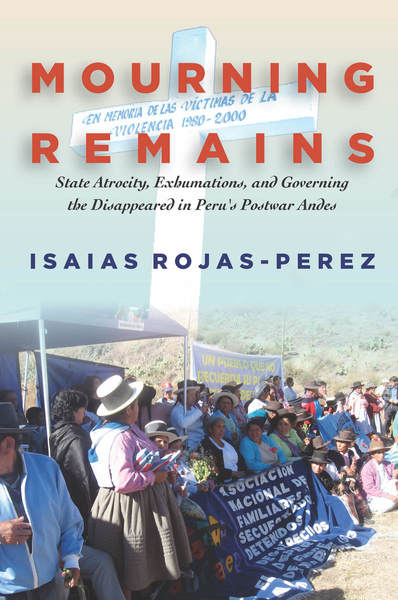 Winner of the 2018 APLA Book Prize, sponsored by the Association for Political and Legal Anthropology (APLA).

Mourning Remains examines the attempts to find, recover, and identify the bodies of Peruvians who were disappeared during the 1980s and 1990s counterinsurgency campaign in Peru's central southern Andes. Isaias Rojas-Perez explores the lives and political engagement of elderly Quechua mothers as they attempt to mourn and seek recognition for their kin.

Of the estimated 16,000 Peruvians disappeared during the conflict, only the bodies of 3,202 victims have been located, and only 1,833 identified. The rest remain unknown or unfound, scattered across the country and often shattered beyond recognition. Rojas-Perez examines how, in the face of the state's failure to account for their missing dead, the mothers rearrange senses of community, belonging, authority, and the human to bring the disappeared back into being through everyday practices of mourning and memorialization. Mourning Remains reveals how collective mourning becomes a political escape from the state's project of governing past death and how the dead can help secure the future of the body politic.

Isaias Rojas-Perez is Associate Professor of Anthropology at Rutgers, The State University of New Jersey-Newark.

"Profound—and profoundly moving—Mourning Remains opens up another history of Peru in the aftermath of the bloody war between the Shining Path, the military, and the rest of the country. Rojas-Perez's narrative boldly offers presence to those who died un-nameable deaths and the practices through which their relatives memorialize their lives. This book tells us that acknowledging their presence may be a requirement for an unusual and necessary reconciliation."

"Giving close attention to the work women do in the aftermath of unspeakable violence to knit life together, Isaias Rojas-Perez reveals the amazing potential of ethnography to engage suffering and show how the living learn to become apprentices to death itself. Mourning Remains is an outstanding contribution to the anthropology of genocide, violence, and the ability to reclaim life to the extent possible."

"In this stunning ethnography, Rojas-Perez reveals how the materiality and affective force of victims' remains persist in the aftermath of war—revealing unexpected possibilities for reimagining political community. Theoretically nuanced and empirically rich, Mourning Remains reassesses the broad claims of transitional justice in Peru through a vivid, painstaking look at the attempt to craft legal evidence from disinterred traces of wartime atrocities."

"In its careful consideration of state power in its various modes and its examination of the possibilities for rearrangements of this power, Mourning Remains adds fresh insight to analyses of sovereignty, necropolitics, and governance of the dead....Clearly argued and deeply researched, [this book] is an important theoretical and ethnograhic contribution to studies of post-conflict Peru, forensic exhumation, human rights, and transitional justice."

"Rojas-Perez complicates our understanding of power itself, highlighting the ways in which alongside the disciplinary operation of sovereign power there are elements that exceed these limits thanks to the resistance and agency of even the most marginalized actors (in this case Peruvian indigenous peasant women). This also points to the importance of [transitional justice] not just engaging with sites and discourses beyond elite, formal institutions...but also revisiting the very conception of the political."