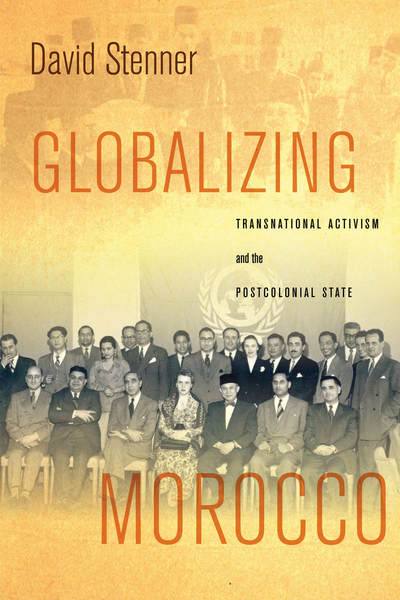 The end of World War II heralded a new global order. Decolonization swept the world and the United Nations, founded in 1945, came to embody the hopes of the world's colonized people as an instrument of freedom. North Africa became a particularly contested region and events there reverberated around the world. In Morocco, the emerging nationalist movement developed social networks that spanned three continents and engaged supporters from CIA agents, British journalists, and Asian diplomats to a Coca-Cola manager and a former First Lady. Globalizing Morocco traces how these networks helped the nationalists achieve independence—and then enabled the establishment of an authoritarian monarchy that persists today.

David Stenner tells the story of the Moroccan activists who managed to sway world opinion against the French and Spanish colonial authorities to gain independence, and in so doing illustrates how they contributed to the formation of international relations during the early Cold War. Looking at post-1945 world politics from the Moroccan vantage point, we can see fissures in the global order that allowed the peoples of Africa and Asia to influence a hierarchical system whose main purpose had been to keep them at the bottom. In the process, these anticolonial networks created an influential new model for transnational activism that remains relevant still to contemporary struggles.

"David Stenner's sophisticated study of the Moroccan nationalists' social-political international network innovates the conversation on modern Middle Eastern and decolonization history. This rich story reflects the all-out pragmatism of the Moroccans, and culminates in an ironic twist when the nationalists' network is turned into a domestic liability. A great, well-argued read."

"David Stenner locates Moroccan nationalists at the vanguard of what would become a worldwide movement of anti-colonial revolutionaries—a full decade before the conference at Bandung, Moroccan activists navigated the global circuits of the Cold War world in pursuit of sovereignty.Globalizing Morocco is an important contribution to the new Cold War history and the history of decolonization."

"David Stenner's book is the best transnational history of Moroccan independence I've ever read, including work in French and Arabic. Globalizing Morocco is as deep as it is easy to read. A masterful success."

"Stenner's book is a great contribution to the research fields of anticolonialism and the history of decolonization. It confirms the multi-layered and multiplayer nature of anticolonial politics and the respective transition processes leading to the postcolonial period. It also provides interesting examples of how to use network approaches and Digital Humanities tools to deal with that complexity."

"Stenner masterfully situates the [Moroccan] independence movement within the context of the rise of NATO, the UN, and the Arab League....this study offers an integrated, balanced account of the Moroccan nationalist movement situated within international events of the global 1940s and 1950s. Highly recommended."

"David Stenner's masterful new history of the Moroccan independence movement....delivers on virtually all fronts.The writing is lucid, argumentative, and focused on a few key arguments. It includes several never before seen photographs of the era. The source base reflects research in a truly impressive number of archives."

"Stenner's enticing book is about the globalizing strategy of the anticolonial struggle and it succeeds in masterfully showing the international networks of supporters that closely cooperated with Istiqlal and the nationalist movement.[An] important contribution to the history of nationalism in Morocco, especially to US-Moroccan history."

"The originality of the study, the rigorous methodology developed by social network analysis, and the extensive use of sources in English, French, Spanish, and Arabic, most of them traced to an impressive number of archives in Morocco, France, Spain, England, and United States, make Stenner's book a remarkable work....[Globalizing Morocco] makes an important contribution to the existing literature on Moroccan nationalism and the history of decolonization, introducing new and stimulating perspectives and results."

"By introducing a novel way of thinking about the Moroccan anticolonial struggle that draws upon transnational network analysis, Stenner recovers an overlooked history....Stenner has written an excellent book that deserves serious consideration from all historians interested in anticolonial movements."

More in History—Imperialism and Colonialism