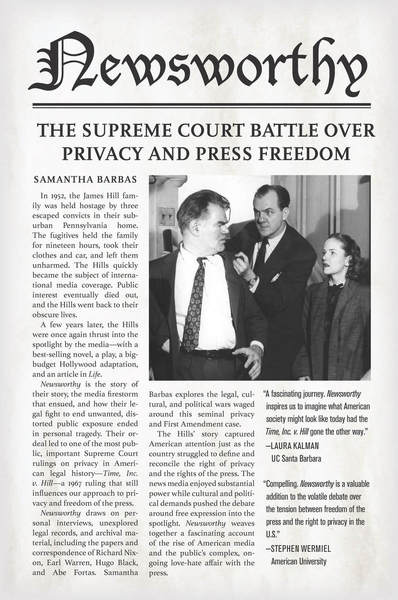 In 1952, the Hill family was held hostage by escaped convicts in their suburban Pennsylvania home. The family of seven was trapped for nineteen hours by three fugitives who treated them politely, took their clothes and car, and left them unharmed. The Hills quickly became the subject of international media coverage. Public interest eventually died out, and the Hills went back to their ordinary, obscure lives. Until, a few years later, the Hills were once again unwillingly thrust into the spotlight by the media—with a best-selling novel loosely based on their ordeal, a play, a big-budget Hollywood adaptation starring Humphrey Bogart, and an article in Life magazine. Newsworthy is the story of their story, the media firestorm that ensued, and their legal fight to end unwanted, embarrassing, distorted public exposure that ended in personal tragedy. This story led to an important 1967 Supreme Court decision—Time, Inc. v. Hill—that still influences our approach to privacy and freedom of the press.

Newsworthy draws on personal interviews, unexplored legal records, and archival material, including the papers and correspondence of Richard Nixon (who, prior to his presidency, was a Wall Street lawyer and argued the Hill family's case before the Supreme Court), Leonard Garment, Joseph Hayes, Earl Warren, Hugo Black, William Douglas, and Abe Fortas. Samantha Barbas explores the legal, cultural, and political wars waged around this seminal privacy and First Amendment case. This is a story of how American law and culture struggled to define and reconcile the right of privacy and the rights of the press at a critical point in history—when the news media were at the peak of their authority and when cultural and political exigencies pushed free expression rights to the forefront of social debate. Newsworthy weaves together a fascinating account of the rise of big media in America and the public's complex, ongoing love-hate affair with the press.

Samantha Barbas is Professor of Law at University at Buffalo Law School. She is the author of three books: Movie Crazy: Fans, Stars, and the Cult of Celebrity (2001), The First Lady of Hollywood: A Biography of Louella Parsons (2005), and Laws of Image (Stanford, 2015). She has provided legal commentary for The New York Times, The Guardian, and The Washington Post.

"This fascinating book journeys back to a transformative moment in Supreme Court history, when it declared that the Constitution protected the press's invasion of privacy of newsworthy subjects. Newsworthy inspires us to imagine what American society might look like today had the decision gone the other way."

"With a compelling narrative of the important and fascinating Supreme Court case of Time, Inc. v. Hill, Newsworthy is a valuable addition to the volatile debate over the tension between freedom of the press and the right to privacy in the U.S."

"In Newsworthy, Barbas demonstrates her formidable skill as a scholar and storyteller, producing a page-turner from deep research that places Time, Inc. v. Hill at the meeting point of the colliding rights of privacy and freedom of the press...Ultimately, the book offers crucial context for our understanding of the relationship between the First Amendment and the democratic public sphere."

"Drawing from detailed and as-yet unexamined sources...Barbas assembles a compelling trove of evidence to support her argument. Her analysis is organized and written in an exciting narrative that challenges academic convention. As such, readers will find Newsworthy not only a human story about the law's effects on individual lives but also a significant legal treatise on the competition between fundamental rights of privacy and press made all the more relevant by the contemporary debate about 'fake news.'"

"Placing Time, Inc. v. Hill in its legal and cultural context illuminates an underexamined period in the development of privacy law and questions current privacy standards in the United States...If readers leave Newsworthy reconsidering the constitutional balance between personal privacy and freedom of the press, the author will have achieved her goal."