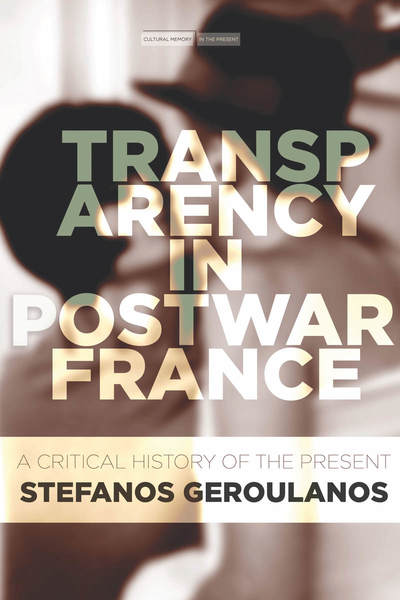 Transparency in Postwar France
A Critical History of the Present
Stefanos Geroulanos
SERIES: Cultural Memory in the Present

This book returns to a time and place when the concept of transparency was met with deep suspicion. It offers a panorama of postwar French thought where attempts to show the perils of transparency in politics, ethics, and knowledge led to major conceptual inventions, many of which we now take for granted.

Between 1945 and 1985, academics, artists, revolutionaries, and state functionaries spoke of transparency in pejorative terms. Associating it with the prying eyes of totalitarian governments, they undertook a critical project against it—in education, policing, social psychology, economic policy, and the management of information. Focusing on Sartre, Lacan, Canguilhem, Lévi-Strauss, Leroi-Gourhan, Foucault, Derrida, and others, Transparency in Postwar France explores the work of ethicists, who proposed that individuals are transparent neither to each other nor to themselves, and philosophers, who clamored for new epistemological foundations. These decades saw the emergence of the colonial and phenomenological "other," the transformation of ideas of normality, and the effort to overcome Enlightenment-era humanisms and violence in the name of freedom. These thinkers' innovations remain centerpieces for any resistance to contemporary illusions that tolerate or enable power and social coercion.

Stefanos Geroulanos is Associate Professor of European History and Director of the Center for International Research in the Humanities and Social Sciences at New York University. He is the author of An Atheism that Is Not Humanist Emerges in French Thought (Stanford, 2010).

"This expansive and original book sheds important new light on the thought of the trente glorieuses as profoundly preoccupied with opacity and otherness. Geroulanos communicates the deep ethical and political commitments that motivated these philosophical and social investigations, underscoring why the French thought that emerged in this period still matters."

"With elegance and rigor, Geroulanos traces the evolution of the concept of transparency in postwar France in fields ranging from philosophy and film to psychoanalysis, medicine, and social history. Interweaving original archival research with careful close readings, this extremely impressive semiotic history challenges us to think about texts, their contexts, and our present in fascinating new ways."

"Essential for understanding the problems we face in the digital age with regard to new forms of exposure, Geroulanos's masterful account of postwar thought inaugurates a new style of semiotic history and provides a necessary propaedeutic to a revaluation of our current ideals of transparency and openness."

"Transparency, as examined here, has more to do with mechanisms a society or individuals deploy for self-reassurance, self-justification, and political and moral order. Piercing through transparency in a critical manner requires active perceptual shifts that re-engineer long-established collective ways of seeing and thinking. As such, Geroulanos's ambition for producing a critical history of the present equally lets us ponder en transparence the obscure legacy of the Enlightenment and Western modernity....Transparency in Postwar France is a captivating read, which bears resonance with our present times in so many ways and in contexts that exceed the geographical boundaries of France."

"As Stefanos Geroulanos amply demonstrates, there is still plenty of scope for originality...in its erudition, richness and analytical rigour, [Transparency in Postwar France] takes the intellectual history of postwar France in exciting new directions. The most obvious innovation is that the entire book is held together, not by one or two authors, or a specific concept within a thinker's writing, but by a single master concept: "transparency". This becomes the guiding thread that gives the arguments their coherence. Of course, for this to work, "transparency" not only needs to be a clearly-articulated concept, but also speak meaningfully across texts, times and places. This is a tall order....Geroulanos makes an impressive case....What is immediately obvious about this book is how it has changed the way I look at post-war France. I am starting to see new connections, debates, ideas and images."

"Interweaving intellectual history with political history, history of science and cultural studies, Geroulanos shows how French intellectuals 'built tool after tool for dismantling' Cartesian-based claims to society, ethics and politics as coherent, legible and stable entities....Geroulanos gives us a model for doing a kind of Derridean analysis, as he turns over the ideas of multiple thinkers from multiple perspectives and multiple contexts."

"The innovative epistemological and methodological reflection underpinning the project will be of interest to intellectual historians working on periods and places far removed from France in the decades following the Second World War, making Transparency in Postwar France one of the most thought-provoking works of modern intellectual history to have appeared in recent years."

"An imposing work of intellectual history, which will no doubt find its place on the shelf alongside some of the classics of the genre. A review of this work could, in some ways, stop there. It is a book one needs discover for oneself—especially at this particular moment in the reception of the postwar French intellectual tradition."

"Moving away from a treatment of concepts as belonging to disciplinarily defined conversations, or even to particular spheres of social life, Geroulanos has written a history of transparency as a passage point of signification, through which a multitude of cultural productions are made legible. The payoff of this methodological innovation is enormous....[An] exemplary and surprising intellectual history that the reviewers celebrate for its creativity and ambition. Transparency in Postwar France is not only a major achievement in its own right, but a provocation and an incitement to expand the scope of intellectual history."

"Geroulanos has produced not a slice through the history of French ideas, but rather the most comprehensive intellectual history of the postwar French moment since Martin Jay's magisterial Downcast Eyes, published a quarter of a century ago. Few histories have weaved together such a range of intellectuals, both the major names—Jean-Paul Sartre, Michel Foucault, Jacques Lacan, Jacques Derrida—but also myriad other figures who are mostly forgotten today, but who wielded significant influence at the time. Breaking free from the gravitational pull of the discipline of philosophy, Geroulanos also tells us about French anthropology, biology, linguistics, even making brief excursions through the history of French policing, film, and in a particularly engaging chapter, gangsters."

"An impressive achievement....As Geroulanos demonstrates with great elegance, transparency defies and cuts across philosophical classifications, capturing the emergence of new anxieties, new objects of analysis, and new modes of seeing the world as well as new self-perceptions. Each part of the book traces the fashioning of transparency as a symbol of a totalizing impetus in culture, science, social life, and politics."

"Stefanos Geroulanos's book is a conceptual history of another term that postmodernism has sought to problematize: transparency. His ambitious, wide-ranging, and erudite study provides a comprehensive account of this concept's place in French thought since the 1930s, while also rethinking the intellectual history of this period from the standpoint of debates surrounding transparency.... Intellectual historians who believe that their task is to map out the relationships between ideas will find much to admire in Transparency in Postwar France."

"Geroulanos's ability to interweave disparate fields to reveal a common preoccupation with the problem of transparency during the postwar is an exceptional accomplishment, complex in its task and ambitious in its scope."

"Transparency in Postwar Franceis a full-blown piece of critical theory, in the sense that it diagnoses a danger surrounding discourses of transparent information, and provides alternative normative resources to justify resistance to them....a timely and important contribution that stems from a deep meditation on our present challenges."––Andrew Dunstall, History and Theory

"In this intellectually impressive and carefully constructed book, Geroulanos has assembled a persuasively argued and informative series of narratives—or, 'entangled microhistories'—that are concerned with the development of various critiques of the concept of transparency....There is a huge amount to be learnt from the archival research and readings of published texts offered up from the very outset of, and throughout, this book....[A] vital challenge for historians to respond to in terms of further reflection on how they conceive of their function and the utility of their histories."

"Transparency in Postwar France offers an elaborate and well-informed survey on what we could call a French period of hostility towards transparency lasting from the end of the Second World War to the early 1980s....Geroulanos's erudite and unprecedented analysis has great merit and shows how transparency as a requirement in public affairs, scientific considerations, intersubjective relations, and even in the subject's relation to itself, was inverted into a dated, oppressive promise."

"Thanks to Geroulanos, French readers and specialists in modern intellectual history will have a better understanding of the singularity of French thought in the second half of the twentieth century. His book draws numerous original connections between the authors, problems, and works of the postwar decades, giving rise to a new image of intellectual life during the trente glorieuses....Transparency in Postwar France is not only an extraordinarily innovative work, it will become a classic for the history of the period."

"Transparency in Postwar France is a brilliant, erudite book, at once wide-ranging in its scope and intricate in its details....There is no way to do justice in a short review to the various historical and conceptual threads that Geroulanos deftly weaves into that hermeneutical web."

"Through a skilful articulation of transparency's many levels—transparency of self, others, and world—Geroulanos's book shows us that the rise of this concept in liberal democracies has developed out of epistemological inquiry and Enlightenment aspirations....While the individual thinkers with which Geroulanos engages have different concerns, when brought together in the service of making clear connections between epistemological, personal, intersubjective, and political transparency, they become eminently inspiring for thinking a new politics of visibility in the digital era."