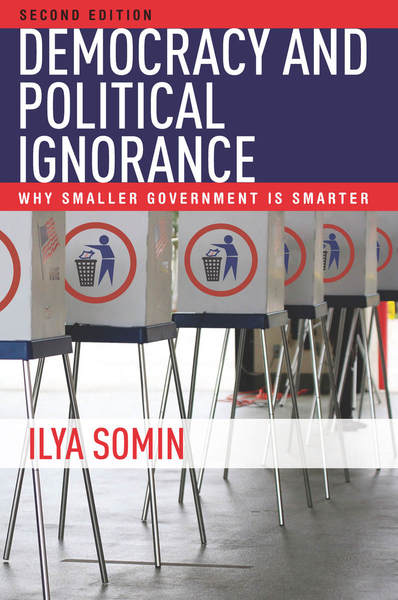 One of the biggest problems with modern democracy is that most of the public is usually ignorant of politics and government. Many people understand that their votes are unlikely to change the outcome of an election and don't see the point in learning much about politics. This creates a nation of people with little political knowledge and little ability to objectively evaluate what they do know.

The second edition of Democracy and Political Ignorance fully updates its analysis to include new and vital discussions on the implications of the "Big Sort" for politics, the link between political ignorance and the disproportionate political influence of the wealthy, assessment of proposed new strategies for increasing political knowledge, and up-to-date survey data on political ignorance during recent elections. Ilya Somin mines the depths of the current state of ignorance in America and reveals it as a major problem for democracy. He weighs various options for solving this problem, provocatively arguing that political ignorance is best mitigated and its effects lessened by decentralizing and limiting government. People make better decisions when they have stronger incentives to acquire relevant information—and to use it wisely.

Ilya Somin is Professor at the George Mason University School of Law. Somin writes regularly for the Volokh Conspiracy law and politics blog at the Washington Post. He is also the author of The Grasping Hand: Kelo v. City of New London and the Limits of Eminent Domain (2015), and coauthor of A Conspiracy Against Obamacare: The Volokh Conspiracy and the Health Care Case (2013).

"In this second edition of Democracy and Political Ignorance, Ilya Somin significantly strengthens his already compelling case for a more limited government. He elegantly persuades readers to embrace the implications of pervasive, problematic, and oft-times entirely rational voter ignorance. The relevance of this book can't be exaggerated. Professionals and non-specialists alike interested in the intersection of political science, political philosophy, and epistemology should find Democracy and Political Ignorance a very rewarding read."

"The first edition was an excellent work, with ... powerful rebuttals to various 'wisdom of the crowd' theories, and a series of plausible proposals for how to reduce the damage political ignorance can do..Somin's work is a must-read for anyone wanting to understand the pathologies of American democracy or what we can do about it .....

The second edition contains a number of important updates .... includ[ing] data from recent elections... and a good response to defenders of sortition."

—Jason Brennan, Georgetown University, author of The Ethics of Voting.