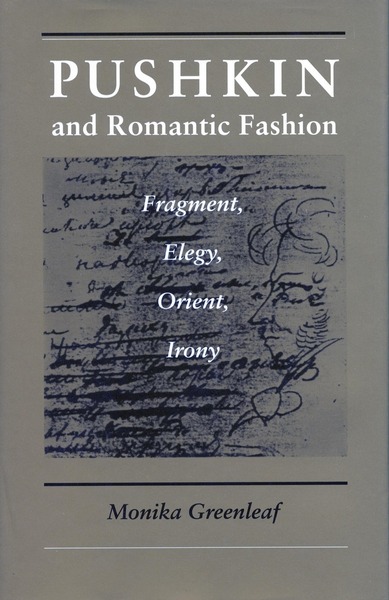 Winner of the 1995 Scaglione Prize for Studies in Slavic Languages & Literatures (Honorable Mention), sponsored by the Modern Language Association.

Winner of the 1995 Wayne S. Vucinich Book Prize, sponsored by the Amer. Assoc. for the Advancement of Slavic Studies.

Pushkin and Romantic Fashion is about the interpenetration of culture and personality, specifically Alexander I's Russian Empire, a latecomer in post-Napoleonic European history, and Alexsandr Pushkin, virtuoso improvisor yet prisoner of the Golden Age discourses that now bear his name. It focuses on Pushkin's use of the Romantic fragment, especially the link between the fragment and Romantic irony's fundamental and modern questioning of the sources and intentionality of language. In the view of such irony's most eloquent formulator, Friedrich Schlegel, "identity" does not precede speech, but is forged in each improvisational interaction with interlocutor or reader. One finds out who one is by speaking, and all utterances and texts stand in a fragmentary, contingent relation to an accumulating life-text.

"This is one of those rare books that both present new material (the result of extensive research) and new understanding (the result of intensive and luminous thought). . . . It is a major contribution."

"Greenleaf's notes demonstrate her impressive research in an unusually broad range of sources. . . . If all interpretations are contingently valid, few are more powerfully and sensitively argued than Greenleaf's."