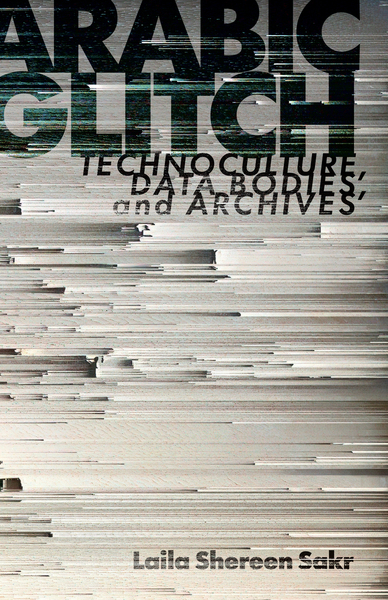 Arabic Glitch explores an alternative origin story of twenty-first century technological innovation in digital politics—one centered on the Middle East and the 2011 Arab uprisings. Developed from an archive of social media data collected over the decades following the 2003 U.S. invasion of Iraq, this book interrogates how the logic of programming technology influences and shapes social movements.

Engaging revolutionary politics, Arab media, and digital practice in form, method, and content, Laila Shereen Sakr formulates a media theory that advances the concept of the glitch as a disruptive media affordance. She employs data analytics to analyze tweets, posts, and blogs to describe the political culture of social media, and performs the results under the guise of the Arabic-speaking cyborg VJ Um Amel. Playing with multiple voices that span across the virtual and the real, Sakr argues that there is no longer a divide between the virtual and embodied: both bodies and data are physically, socially, and energetically actual. Are we cyborgs or citizens—or both? This book teaches us how a region under transformation became a vanguard for new thinking about digital systems: the records they keep, the lives they impact, and how to create change from within.

Laila Shereen Sakr is Assistant Professor of Media Theory and Practice at the University of California, Santa Barbara.

"Innovative and original,Arabic Glitchinterrupts the theoretical silence around Arab technocultures. Channeling the academic, artistic, activist, and technologist, Laila Sakr embodies the contemporary hybridity of Arab cultural production, inaugurating a rightful place for it in the canon."

"Laila Sakr's breathtaking work will transform how the social sciences and humanities understand cyber-activism, transnational solidarity, and collective power. Arabic Glitch is the book interdisciplinary scholars and activists across the world have been waiting for."

"Laila Sakr and her avatar, VJ Um Amel, embrace the glitch—clouds of unknowing, slippery loops, cracks and failures of systems—to better see the materiality of technology, power, and revolution. Aligning theory and practice, installation and performance, Sakr mobilizes media art and digital activist scenes across the Middle East, North Africa, and the internet."

"Arabic Glitch is an essential addition to the critical discourse on power and surveillance in the age of the internet. Laila Sakr decodes the specificity of language and cultural identity on digital praxis, boldly articulating how digital data can enable a distinct form of ocular awareness."

—Dr. Omar Kholeif, author of Internet_Art: From the Birth of the Web to the Rise of NFTs