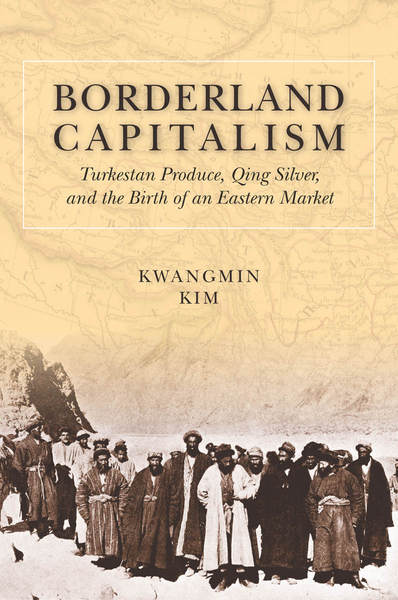 Scholars have long been puzzled by why Muslim landowners in Central Asia, called begs, stayed loyal to the Qing empire when its political legitimacy and military power were routinely challenged. Borderland Capitalism argues that converging interests held them together: the local Qing administration needed the Turkic begs to develop resources and raise military revenue while the begs needed access to the Chinese market.

Drawing upon multilingual sources and archival material, Kwangmin Kim shows how the begs aligned themselves with the Qing to strengthen their own plantation-like economic system. As controllers of food supplies, commercial goods, and human resources, the begs had the political power to dictate the fortunes of governments in the region. Their political choice to cooperate with the Qing promoted an expansion of the Qing's emerging international trade at the same time that Europe was developing global capitalism and imperialism. Borderland Capitalism shows the Qing empire as a quintessentially early modern empire and points the way toward a new understanding of the rise of a global economy.

Kwangmin Kim is Assistant Professor of History at the University of Colorado, Boulder.

"Borderland Capitalism clearly illustrates how Qing power in Central Asia was bound to Beijing's ability to link the Muslim Begs of Xinjiang with the global economy. Kwangmin Kim's rigorous and valuable study will find an enthusiastic audience among readers interested in Qing, Central Asian, and world history."

"The roots that nourished modern global capitalism extended deep into the interior of Central Eurasia. In this pioneering frontier history, Kwangmin Kim offers striking new perspectives on the economic power of the Qing state in the borderlands, with implications for comparative study of empires everywhere."

"Kwangmin Kim offers a pioneering analysis, based on prodigious research, of trade in Qing-era Xinjiang. He reveals the significant commercial relations between the Muslim leadership and China, and and indeed with the world economy. His study fosters understanding of the forces that produced conflicts in the twentieth and twenty-first centuries."

"Borderland Capitalism is an illuminating investigation of the Qing Empire's remaking of Eastern Turkestan into Xinjiang. This study incorporates often untapped Turki and Manchu sources to examine tensions within the oasis society, and offers a refreshing approach that eschews focusing largely on religion and ethnicity—what in public discourse have often become the default explanation—for understanding borderland conflicts."

"This book provides a distinctive perspective on Chinese history that delves deeply into the economic activities occurring on the Qing dynasty's frontiers, which Kim places within the changing global economy and relates to the status of Turkestan within the Qing polity. It offers a persuasive account of the different economic interests of Muslims in the region, moving beyond the conventional ethnic taxonomies that other historians have used to explain events there....[It] argues for the linked nature of the expansions of empire and of capitalism in the eighteenth and nineteenth centuries, thus integrating Qing history into global history in ways that both complement and qualify earlier scholarship."