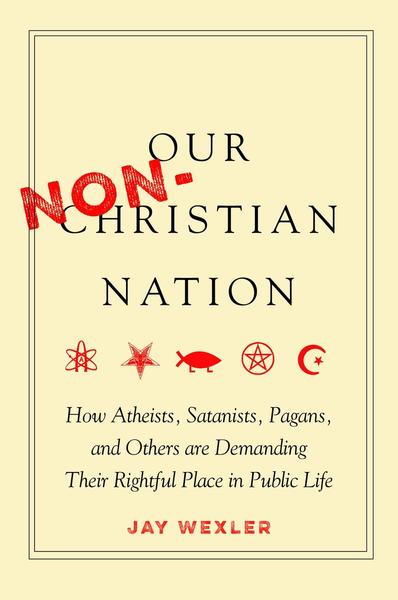 Our Non-Christian Nation
How Atheists, Satanists, Pagans, and Others Are Demanding Their Rightful Place in Public Life
Jay Wexler

Less and less Christian demographically, America is now home to an ever-larger number of people who say they identify with no religion at all. These non-Christians have increasingly been demanding their full participation in public life, bringing their arguments all the way to the Supreme Court. The law is on their side, but that doesn't mean that their attempts are not met with suspicion or outright hostility. In Our Non-Christian Nation, Jay Wexler travels the country to engage the non-Christians who have called on us to maintain our ideals of inclusivity and diversity. With his characteristic sympathy and humor, he introduces us to the Summum and their Seven Aphorisms, a Wiccan priestess who would deck her City Hall with a pagan holiday wreath, and other determined champions of free religious expression. As Wexler reminds us, anyone who cares about pluralism, equality, and fairness should support a public square filled with a variety of religious and nonreligious voices. The stakes are nothing short of long-term social peace.

A Professor at Boston University School of Law, Jay Wexler is also a humorist, short story writer, and novelist. A one-time clerk to Justice Ruth Bader Ginsburg and former lawyer at the US Department of Justice, he has written for National Geographic, The Boston Globe, McSweeney's Internet Tendency, Salon, and many other outlets. His books include When God Isn't Green (2016) and Holy Hullabaloos.

"Timely, trenchant, and tremendously engaging, Our Non-Christian Nation is essential reading for anyone interested in understanding the contemporary battles over religion's role in our national politics and culture."

"In this brilliantly erudite and hugely entertaining romp through recent religious and legal history, Jay Wexler shows why, as our country becomes more religiously diverse, non-Christians need to get their voices heard and Christians need to help repair the wall between church and state. A marvelous read."

"What would it mean to take seriously the idea of religious diversity in the public sphere? Jay Wexler tells the stories of Wiccans, Muslims, and other religious and non-religious groups outside the mainstream who show what existing constitutional doctrine means in practice. The picture he paints provokes us to think differently about what that doctrine should be."

"In this fine book, Jay Wexler urges humanists, atheists, Satanists, and members of minority religious traditions to take advantage of a fascinating new phenomenon: the opening of public space to a variety of beliefs and institutions. His compelling account of 'belief' in public life will be of interest to the deeply religious as well as those who cringe at the very thought of religion. I highly recommend it."

—Anthony B. Pinn, author of Humanism: Essays on Race, Religion and Cultural Production

"A zesty, opinionated assessment of how non-Christians should actually behave....With curiosity and openness, Wexler performs the action that he advocates: that is, making heard a 'cacophony' of voices in public life so that different viewpoints get brought to the fore."

"A fascinating read, and a wonderfully hopeful one...For anyone who feels marginalized as a pagan, nonbeliever, or just not a Christian, it's a manifesto for effective and often hilarious resistance."

"Wexler...has made a timely, at times funny, and compelling piece of reportage looking at a variety of religious groups, as well as a strong argument for the importance of a pluralistic society."

"[T]his book was written for the general public, which often struggles to understand the jurisprudence surrounding religious freedom. Even professors of religious studies often need help in this area....Wexler's writing makes this book ideal for getting undergraduates interested in these issues."

—Joseph Laycock, Journal of the American Academy of Religion

"[An] artfully presented, quite accessible, guide to major legal issues faced by minority faiths in America...recommended for all interested in such topics."

"Wexler's greatest strength is his ability to describe current case law in readily digestible terms, making his work an ideal resource for undergraduates interested in religion and American politics. . .[T]his work can serve as an ideal entry point into important classroom conversations regarding the place of religions, especially minorities, in American law, as well as how both public and legal discourses have shaped the role of religion in American life."