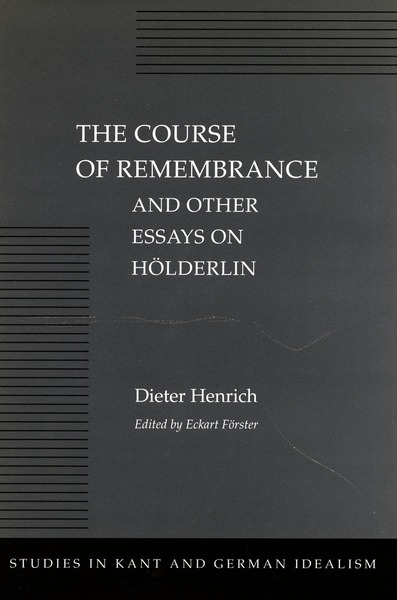 The Course of Remembrance and Other Essays on Hölderlin
Dieter Henrich Edited by Eckart Förster
SERIES: Studies in Kant and German Idealism

Friedrich Hölderlin (1770-1843) has long been recognized as one of the greatest poets of the German language, but his importance to philosophy has surfaced only comparatively recently. Although Schelling and Hegel acknowledged Hölderlin early on as their equal, for a long time his philosophical thought remained unknown outside the small circle of his friends.

Among the most prominent figures in the rediscovery of Hölderlin's thought is Dieter Henrich, who, in a series of highly influential studies over the last thirty years, has shown that Hölderlin played a decisive role in the development of philosophy from Kant to Hegel, and hence in the formation of German Idealism. Among other things, Henrich demonstrated that Hölderlin, while still a student, launched a powerful critique of Fichte's Wissenschaftslehre and outlined an alternative to the dominant view of the foundation of philosophy. This alternative proved pathbreaking for his philosophical friends, forcing Hegel, for example, to abandon his own Kantianism and, eventually, to give systematic articulation to a position that went even beyond Hölderlin's.