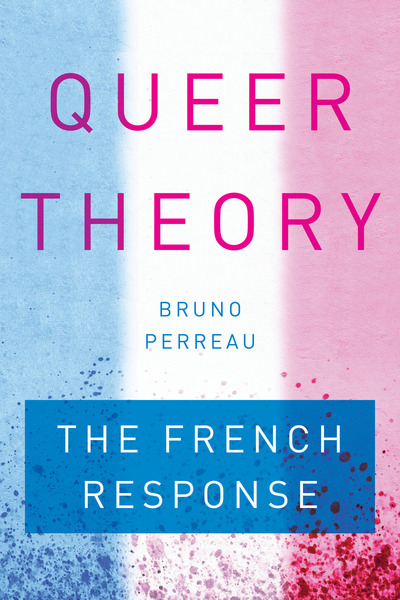 In 2012 and 2013, masses of French citizens took to the streets to demonstrate against a bill on gay marriage. But demonstrators were not merely denouncing its damaging effects; they were also claiming that its origins lay in "gender theory," an ideology imported from the United States. By "gender theory" they meant queer theory in general and, more specifically, the work of noted scholar Judith Butler. Now French opponents to gay marriage, supported by the Vatican, are attacking school curricula that explore male/female equality, which they claim is further proof of gender theory's growing empire. They fear that this pro-homosexual propaganda will not only pervert young people, but destroy the French nation itself.

What are the various facets of the French response to queer theory, from the mobilization of activists and the seminars of scholars to the emergence of queer media and the decision to translate this or that kind of book? Ironically, perceiving queer theory as a threat to France means overlooking the fact that queer theory itself has been largely inspired by French thinkers. By examining mutual influences across the Atlantic, Bruno Perreau analyzes changes in the idea of national identity in France and the United States. In the process, he offers a new theory of minority politics: an ongoing critique of norms is not only what gives rise to a feeling of belonging; it is the very thing that founds citizenship.

Bruno Perreau is Cynthia L. Reed Professor and Associate Professor of French Studies at MIT. He is the author of The Politics of Adoption (2014).

"Bruno Perreau's brilliant and compelling analysis of queer theory's controversial arrival on the French scene covers the full range of repercussions of this cultural encounter and translation. Not only does he offer glimpses into the outer reaches of French public hysteria over the unwanted cultural import called "gender," but he reveals how debates on sexuality, gender, and parenthood strike at the heart of national belonging. Taking into account the various anxieties about French and European inclusion that come to over-determine the so-called gender debates, his book demonstrates that queer theory becomes something new and foreign when it seeps into French soil. The consequences are at once alarming and illuminating."

"Bruno's Perreau's book offers fascinating and original interpretations of the nationalist discourses informing public protests against 'marriage for all' in France. His insights into the 'straight mind of the nation' and the parochialism of 'homonationalist' critiques connect fantasies of sovereign geographies to demonization and systemic violence. Anyone interested in contemporary queer theory and post-colonialism must read this book."

"A signature contribution to contemporary political and critical theory, Bruno Perreau's book aptly situates the fears that haunted the French imagination during the bitter opposition to the "marriage for all" bill in the twin fears of cultural invasion by the United States--via gender theory--and of contagion by a minority culture. In deconstructing queer theory's "return" to France, Perreau gracefully navigates the challenge of diagnosing the cultural fantasies at play without succumbing to the binaries, French/American, local/global, and majority/minority, that the social movement had itself reified."

"Queer Theory: The French Response is an excellent contribution to the field of gender studies, queer theory, and political theory, and it will interest anyone concerned with the evolving political landscape in Europe and the United States. It should be essential reading for scholars and students in gender studies and queer theory who are also committed activists interested in thinking beyond 'homonationalism' and the 'gay international.' Perreau's new book encourages us all to seek and create new narratives where being queer means simultaneously 'coming and going' instead of simply 'coming out.'"

"Overall Queer Theory: The French Response is an important addition to both queer theory and political theory for its examination of how cultural fantasies shape theory as it travels. The arguments advanced in the book will be useful to scholars of contemporary politics, transnational cultural studies, and queer theory. By focusing on where queer theory and political theory overlap, Perreau brings into focus a pressing oversight of the modern liberal State: minorities."