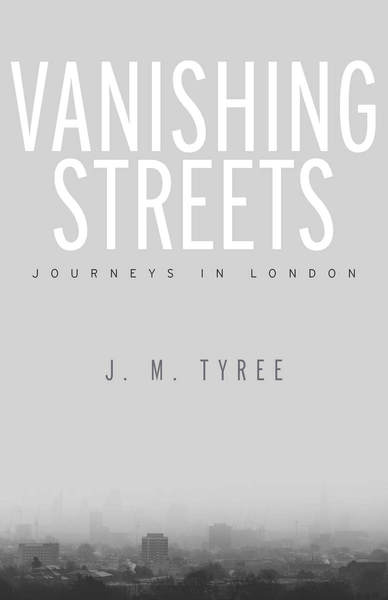 Vanishing Streets reveals an American writer's twenty-year love affair with London. Beguiling and idiosyncratic, obsessive and wry, it offers an illustrated travelogue of the peripheries, retracing some of London's most curious locations. As J. M. Tyree wanders deliriously in "the world's most visited city," he rediscovers and reinvents places that have changed drastically since he was a student at Cambridge in the 1990s. Tyree stumbles into the ghosts of Alfred Hitchcock, Graham Greene, and the pioneers of the British Free Cinema Movement. He offers a new way of seeing familiar landmarks through the lens of film history, and reveals strange nooks and tiny oddities in out-of-the-way places, from a lost film by John Ford supposedly shot in Wapping to the beehives hidden in Tower Hamlets Cemetery, an area haunted by a translation error in W. G. Sebald's Austerlitz.

This book blends deeply personal writing with a foreigner's observations on a world capital experiencing an unsettling moment of transition. Vanishing Streets builds into an astonishing and innovative multi-layered project combining autobiography, movie madness, and postcard-like annotations on the magical properties of a great city. Tyree argues passionately for London as a cinematic dream city of perpetual fascinations and eccentricities, bridging the past and the present as well as the real and the imaginary.

J. M. Tyree is the Nonfiction Editor of New England Review and the coauthor of Our Secret Life in the Movies (with Michael McGriff). He has contributed to Sight & Sound, The Believer, Film Quarterly, and the British Film Institute's Film Classics series of books. He was a Keasbey Scholar at Trinity College, Cambridge, and a Truman Capote-Wallace Stegner Fellow and Jones Lecturer in Fiction at Stanford University. He currently teaches as Distinguished Visiting Professor at VCUarts.

"Tyree's lyrical prose is distinctly cinematic, describing sweeping landscapes interspersed with tight shots, close-ups, and all the drama and symbolism of character quests with director's commentary, resulting a fresh portrait of London and an intriguing travelogue."

"J. M. Tyree writes gorgeously, hauntingly of London. He enchants with ghostly byways, mythical wellsprings of memory, and astonishing secret civic trapdoors that lead to taproots of personal and cinematic identity. This is a dreamy subterranean work where one can equally find echoes of other cities—yours and mine—buried alive, subconsciously in sync with the great vanishing streets of a great city."

—Guy Maddin, director of My Winnipeg

"Vanishing Streets encompasses so many different forms: it's a travelogue through an endlessly fascinating city, a deeply affecting memoir, and an elegy for London. J. M. Tyree's voice is myriad as well: wise and ironic and funny and frank and searing and honest. Readers will want to remain in Tyree's London long after they finish this book, drunk with wandering and wondering."

—Jesmyn Ward, author of Salvage the Bones and Men We Reaped

"Vanishing Streets re-maps London. As both intimate guide and wide-eyed outsider, J. M. Tyree dwells in the places and histories lesser writers would ignore. Through his wry photos, searching intelligence, and witty, incisive prose, he imbues every street and every sentence with wonder and mystery. London is the most-visited city in the world. Open this book and see it anew."

—Will Boast, author of Epilogue: A Memoir

"J. M. Tyree's Vanishing Streets is a journey through the streets of London—and also through loss and failure, and, most of all, through the writer's 20-year love affair with his wife. In turns delightful and heartbreaking, Tyree's is the best kind of travel writing; it is an exploration of how one place can vividly reveal us to ourselves."

— Miranda Kennedy, author of Sideways on a Scooter: Life and Love in India

"Vanishing Streets is difficult to classify—parts travelogue, guidebook, and criticism, maybe even a bit of memoir—but this strange and wonderful book is easy to like. J. M. Tyree writes with wit and insight about everything from Free Cinema to his marriage to gentrification. These idiosyncratic tours of London create a mosaic portrait of his city that feels like a gift to its reader."

—Justin St. Germain, author of Son of a Gun

"Vanishing Streets is a vivid, sensual, and multi-directional take from a masterful writer who knows his craft, knows himself, and knows London. London is my favorite city on earth, and this book is a treasure house for all who adore this capital city."

—Jay Parini, author of The Last Station and Empire of Self: A Life of Gore Vidal