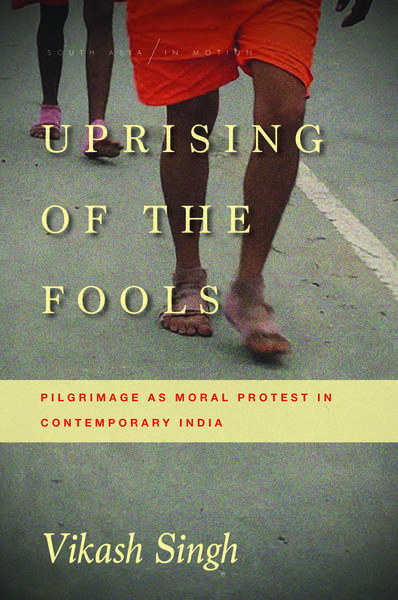 The Kanwar is India's largest annual religious pilgrimage. Millions of participants gather sacred water from the Ganga and carry it across hundreds of miles to dispense as offerings in Śiva shrines. These devotees—called bhola, gullible or fools, and seen as miscreants by many Indians—are mostly young, destitute men, who have been left behind in the globalizing economy. But for these young men, the ordeal of the pilgrimage is no foolish pursuit, but a means to master their anxieties and attest their good faith in unfavorable social conditions.

Vikash Singh walked with the pilgrims of the Kanwar procession, and with this book, he highlights how the procession offers a social space where participants can prove their talents, resolve, and moral worth. Working across social theory, phenomenology, Indian metaphysics, and psychoanalysis, Singh shows that the pilgrimage provides a place in which participants can simultaneously recreate and prepare for the poor, informal economy and inevitable social uncertainties. In identifying with Śiva, who is both Master of the World and yet a pathetic drunkard, participants demonstrate their own sovereignty and desirability despite their stigmatized status. Uprising of the Fools shows how religion today is not a retreat into tradition, but an alternative forum for recognition and resistance within a rampant global neoliberalism.

"Reading through Uprising of the Fools is its own pilgrimage through parallel universes. There is Vikash Singh's ethnographic narrative of the North Indian Hindu pilgrimage, and, along the way, are Singh's own explorations of the meaning of the process. The book invites a double-vision: looking from inside and outside at the ways of knowing that, for all the apparent differences, link the pilgrim and the reader together. A remarkably original and subtle intellectual adventure."

"Uprising of the Fools is wonderfully—and disturbingly—rich with insights drawn from impressive ethnographic research. For anyone interested in theories of religious practice, performance, and pilgrimage, this is a must-read."

"In this theoretically sophisticated, beautifully descriptive, and emotionally moving book, Vikash Singh gives us a compelling analysis of a contemporary religious pilgrimage. Uprising of the Fools is essential reading for ethnographers, cultural sociologists, scholars of religion, globalization theorists, and psychoanalytic thinkers alike."

—Thomas DeGloma, Hunter College and the Graduate Center of the City University of New York

"In this perceptive and enlightening study of Haridwar's annual kanvariya festival, Vikash Singh conveys the struggles of north India's anonymous laboring men, and ultimately their strength and resilience. Readers with interests in religion, sociology, or politics will find it thought-provoking and valuable."

"Vikash Singh has written a richly detailed ethnography of a little-studied North Indian pilgrimage that draws from across Hindu sects. He offers a provocative argument about the forces driving the growth of popular Hindu rituals, to show how they are an increasingly important site of self-making and religious reform in India today."

"Vikash Singh's Uprising of the Fools is bound to become a classic in the contemporary study of religion and sociology, bringing this area to the forefront of modern theory again. Brilliantly pushing back against the presumption that religion has become secularized under neoliberalism, Singh provides vivid and extraordinarily well-written ethnographic evidence of how a difficult religious ritual in India—the pilgrimage—is enmeshed and inextricable from late capitalism's efforts to justify and sustain itself. This is a must read for anyone interested in social movements, religion, and social theory in or outside the academy."

—Lynn S. Chancer, Hunter College and the Graduate Center of the City University of New York

"A provocative attempt to highlight and theorize popular religious practice for social scientists interested in the psyche, the state, and the economy....[T]his insightful book is an important contribution to an emerging critical project within the sociology of religion and would be useful for graduate seminars on theory, religion, culture, and even stratification."

"In this thematically poignant and evocative work, Vikash Singh provides an ethnography of the Kanwar, India's largest annual pilgrimage rite, alongside a running meditation on the place of religion in modern social theory and (continental) philosophy....The book is sure to prove engrossing."

"One of the skilled techniques of the author is to render the examination of this ritual pilgrimage in layers. This sense of "unpeeling an onion" is a common theme in qualitative research. This, interestingly enough, is also one of the experiential modes of religious pilgrimage itself. In this way, the ethnography is like a pilgrimage into the reality and landscape of a group's religious experience, or the "sacred"....Uprising of the Fools will prove to be an important volume in the discussion of how ritual engages the body, the margins of sexuality, pain, ecstasy, and so forth....[It] offers a theoretically rigorous and experientially enchanting (Weberian allusion intended) study of ritual pilgrimage."

"Singh bounces back and forth between vivid descriptions of the pilgrimage and empathic accounts of the Kanwarias' everyday life struggles in a neoliberal economy. Challenging theories of secularism, modernisation, and religious fundamentalism, he thereby skilfully situates the pilgrims, the 'fools' as the term bholā and the resentment against the Kanwar suggests, in post-colonial capitalism....Uprising of the Fools is a rich ethnography of the Kanwar pilgrimage and offers a timely critical engagement with epistemologies surrounding religion."

Scroll.in
Interview: Kanwariyas need to be seen beyond being merely a cause of traffic snarls and disruptions