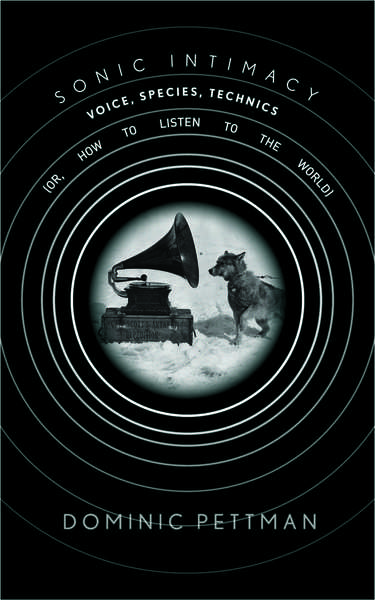 Sonic Intimacy
Voice, Species, Technics (or, How To Listen to the World)
Dominic Pettman

Sonic Intimacy asks us who—or what—deserves to have a voice, beyond the human. Arguing that our ears are far too narrowly attuned to our own species, the book explores four different types of voices: the cybernetic, the gendered, the creaturely, and the ecological. Through both a conceptual framework and a series of case studies, Dominic Pettman tracks some of the ways in which these voices intersect and interact. He demonstrates how intimacy is forged through the ear, perhaps even more than through any other sense, mode, or medium. The voice, then, is what creates intimacy, both fleeting and lasting, not only between people, but also between animals, machines, and even natural elements: those presumed not to have a voice in the first place. Taken together, the manifold, material, actual voices of the world, whether primarily natural or technological, are a complex cacophony that is desperately trying to tell us something about the rapidly failing health of the planet and its inhabitants. As Pettman cautions, we would do well to listen.

Dominic Pettman is Professor of Culture and Media at Eugene Lang College and The New School for Social Research. His most recent book is Infinite Distraction: Paying Attention to Social Media (2016).

"With Sonic Intimacy, we are manifestly in the hands of a skilled and not a little playful writer who connects new media to long developed philosophical conversations. This is a book that catalyzes thinking as much as it documents thoughts, and its influence should be wide and varied."

"Sonic Intimacy is a perceptive, engaging, and clever set of meditations on a topic of increasing scholarly importance: how sound produces human, technical, and nonhuman intimacies. Pettman's treatment of sound across the human and nonhuman is innovative, refreshing, and quite needed at this time."

"The form and style of Pettman's book capture the character of this roving ear, always pricking up with the possibility of another intriguing example. Pettman is a very engaging writer, and the way he traverses contexts and theoretical horizons is thrilling...Pettman's writing is perhaps at its most exciting when it ignores expectations to pin down the voices of interlocutors and instead revels in throwing the voice, in making it seem as if it emanates from somewhere else. Pettman himself, whose body of writing gives the impression of an insatiable curiosity, is no doubt already chasing down other voices and other worlds. I urge readers, though, to let their ear linger a little longer over this intriguing little book that promises to help us discern voices where we least expect to hear them."