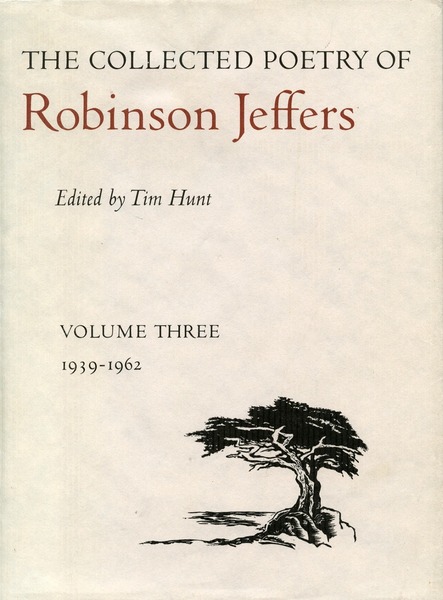 Jeffers consciously set himself apart from the poetry of his generation—by physical isolation at his home in Carmel, by his unusual poetic form, and by his stance as an "anti-modernist." Yet his work represents a profound, and profoundly original, artistic response to problems that shaped modernist poetry and that still perplex poets today; how to reconcile scientific and artistic discourses and modes of vision; how to connect present-day experience to myths perceived as lying at the origins of human culture; how to renew the poetic language and how (or whether) to present art's claim to moral, spiritual, or epistemological seriousness within representations of modern phenomena.

For Jeffers, as for no other important modern American poet, there has never been a collected poems, not even a truly representative selected poems—the current Selected Poetry, first published in 1938, contains no work from the last three volumes published during Jeffers' lifetime or from his posthumous volume. Now, for the first time, all of Jeffers' completed poems, both published and unpublished, are presented in a single, comprehensive, and textually authoritative edition.

The first three volumes of this four-volume work, will present chronologically all of Jeffers' published work from 1920 to 1963. The present volume consists of poems written from 1939 to Jeffers' death in 1963, including the dramatic poems The Bowl of Blood, Medea, and The Double Axe byt were eventually omitted for reasons that are unclear; and those poems from his last years, which appeared posthumously in The Beginning and the End, that seem to be completed drafts.