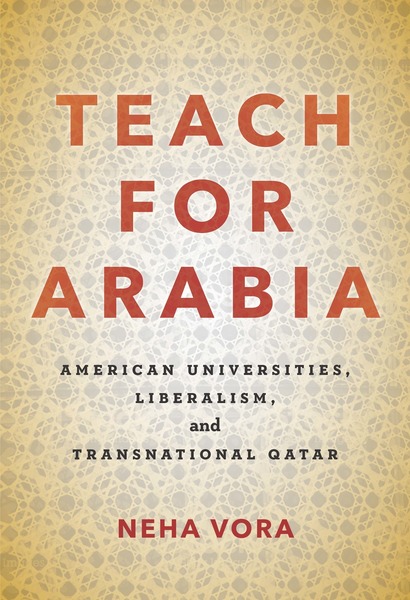 Teach for Arabia offers an ethnographic account of the experiences of students, faculty, and administrators in Education City, Qatar. Education City, home to the branch campuses of six elite American universities, represents the Qatari government's multibillion dollar investment over the last two decades in growing a local knowledge-based economy. Though leaders have eagerly welcomed these institutions, not all citizens embrace the U.S. universities in their midst. Some critics see them as emblematic of a turn away from traditional values toward Westernization. Qatari students who attend these schools often feel stereotyped and segregated within their spaces.

Neha Vora considers how American branch campuses influence notions of identity and citizenship among both citizen and non-citizen residents and contribute to national imaginings of the future and a transnational Qatar. Looking beyond the branch campus, she also confronts mythologies of liberal and illiberal peoples, places, and ideologies that have developed around these universities. Supporters and detractors alike of branch campuses have long ignored the imperial histories of American universities and the exclusions and inequalities that continue to animate daily academic life. From the vantage point of Qatar, Teach for Arabia challenges the assumed mantle of liberalism in Western institutions and illuminates how people can contribute to decolonized university life and knowledge production.

Neha Vora is Associate Professor of Anthropology at Lafayette College. She is the author of Impossible Citizens: Dubai's Indian Diaspora (2013).

"Neha Vora has written a compelling, and personal, account of American campuses in Qatar, one that is as thoughtful as it is thought-provoking. Teach for Arabia brings to life the constantly evolving dynamics and debates within these campuses and offers great insight into the global expansion of American higher education institutions."

"Teach for Arabia is a groundbreaking contribution to understanding the goals and consequences of establishing US branch campuses in the Arab Gulf. Neha Vora interrogates the claim that universities export liberal education, arguing that such assertions rely on the reification of an illiberal other and a romanticization of the US academy. Her rich ethnographic detail makes this a unique and engaging read."

"Teach for Arabia boldly challenges academic cosmopolitanism within the United States, demonstrating how notions of the liberal universities of the West versus their supposed illiberal counterparts among Arab states are firmly embedded in liberal ideologies. An attentive ethnography of the lived contradictions within Education City, this book shows how critique has no region and authoritarianism has no territory. Neha Vora's book represents a spectacular and hopefully developing direction in critical university studies."

—Roderick Ferguson, University of Illinois, Chicago, author of The Reorder of Things: The University and Its Pedagogies of Minority Difference

"If the measure of good anthropology is whether or not one's arguments have resonance with the people being written about, then Vora has produced stellar anthropology. Teach for Arabia should be essential reading for anyone interested in education, modernity and development, citizenship and nationalism, the global university, and most of all, discourses of liberalism and how these discourses travel."––Sami Hermez, Political and Legal Anthropology Review

"[Vora] provides an ethnographic account of college life at six branches of respected American universities in Qatar. By drawing on her experiences working as a professor in the Gulf, attending various conferences and lectures, and interacting with countless students, Vora provides valuable insight on how these branches serve as "postcolonial" institutions established by the West."

"At a time when the Gulf region is undergoing tremendous political transformation, Neha Vora succeeds brilliantly in highlighting an important ongoing pedagogical and cultural transition."