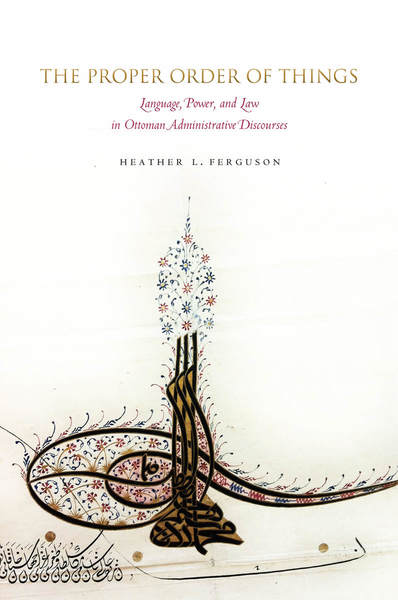 Winner of the 2019 M. Fuat Köprülü Award, sponsored by the Turkish Studies Association.

The "natural order of the state" was an early modern mania for the Ottoman Empire. In a time of profound and pervasive imperial transformation, the ideals of stability, proper order, and social harmony were integral to the legitimization of Ottoman power. And as Ottoman territory grew, so too did its network of written texts: a web of sultanic edicts, aimed at defining and supplementing imperial authority in the empire's disparate provinces. With this book, Heather L. Ferguson studies how this textual empire created a unique vision of Ottoman legal and social order, and how the Ottoman ruling elite, via sword and pen, articulated a claim to universal sovereignty that subverted internal challengers and external rivals.

The Proper Order of Things offers the story of an empire, at once familiar and strange, told through the shifting written vocabularies of power deployed by the Ottomans in their quest to thrive within a competitive early modern environment. Ferguson transcends the question of what these documents said, revealing instead how their formulation of the "proper order of things" configured the state itself. Through this textual authority, she argues, Ottoman writers ensured the durability of their empire, creating the principles of organization on which Ottoman statecraft and authority came to rest.

"The Proper Order of Things invites us to rethink Ottoman empire-building with its capacity to codify, categorize, and monopolize symbolic violence. A brilliant book."

"The Proper Order of Things offers an ambitious treatment of Ottoman bureaucratic textual production. Heather Ferguson's intelligent discursive analysis of the different bureaucratic genres as both texts and spatial practices allows for a new understanding of the nature of Ottoman governance and the longevity of the empire."