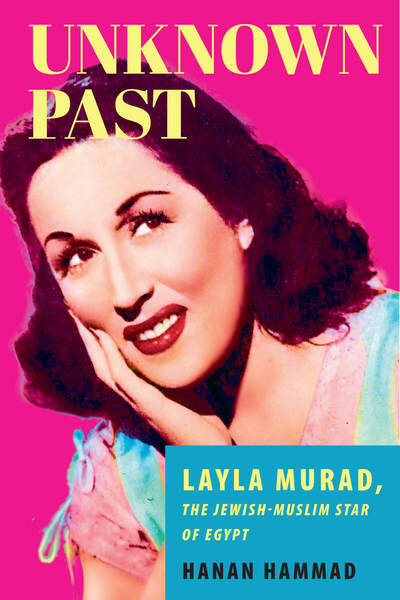 A biography of the "Cinderella" of Egyptian cinema—the veneration and rumors that surrounded an unparalleled career, and the gendered questions that unsettled Egyptian society.

Layla Murad (1918-1995) was once the highest-paid star in Egypt, and her movies were among the top-grossing in the box office. She starred in 28 films, nearly all now classics in Arab musical cinema. In 1955 she was forced to stop acting—and struggled for decades for a comeback. Today, even decades after her death, public interest in her life continues, and new generations of Egyptians still love her work. Unknown Past recounts Murad's extraordinary life—and the rapid political and sociocultural changes she witnessed.

Hanan Hammad writes a story centered on Layla Murad's persona and legacy, and broadly framed around a gendered history of twentieth-century Egypt. Murad was a Jew who converted to Islam in the shadow of the first Arab-Israeli war. Her career blossomed under the Egyptian monarchy and later gave a singing voice to the Free Officers and the 1952 Revolution. The definitive end of her cinematic career came under Nasser on the eve of the 1956 Suez War.

Egyptians have long told their national story through interpretations of Murad's life, intertwining the individual and Egyptian state and society to better understand Egyptian identity. As Unknown Past recounts, there's no life better than Murad's to reflect the tumultuous changes experienced over the dramatic decades of the mid-twentieth century.

Hanan Hammad is Associate Professor and Director of Middle East Studies at Texas Christian University. She is the author of Industrial Sexuality: Gender, Urbanization, and Social Transformation in Egypt (2016), which won prizes from the National Women's Studies Association, the Association for Middle East Women's Studies, and the Arab American Book Awards.

"A fascinating and fun read, Unknown Past carefully documents Layla's story, fills voids, and makes important interventions into debates on her life and legacy. Just as Layla's life was bigger than the screen, this book goes beyond the history of cinema to illuminate questions about religion, society, gender, and politics."

"Bringing together biography and history, Unknown Past examines transformations in midcentury Egypt through the life of the hugely popular Layla Murad. Unraveling rumors and debunking myths, Hanan Hammad draws attention to the social pressures Murad faced as a working woman, as a Jew, as a wife, and as a mother."

"Unknown Past is meticulously researched and vividly written. Hanan Hammad unpacks, in a careful, clear-headed, and brave manner, all the myths surrounding Egypt's beloved star Layla Murad, from her career's entanglement in the Arab-Israel conflict to her premature retirement. An essential read."

—Ted Swedenburg, University of Arkansas, editor of Palestine, Israel, and the Politics of Popular Culture

"Unknown Past: Layla Murad, the Jewish-Muslim Star of Egypt is a descriptively compelling and detailed account of the life and work of a culturally, artistically, and politically influential Egyptian woman through modern Egypt's complicated and perilous times. A consummate work of impeccable scholarship, no Egyptian Cinema or 20th Century Egyptian Biography collection would be complete or comprehensive without the inclusion of a copy of Unknown Past." -Julie Summers, Reviewer's Bookwatch

On Togo Mizrahi and Layla Murad: A Conversation with Deborah Starr and Hanan Hammad