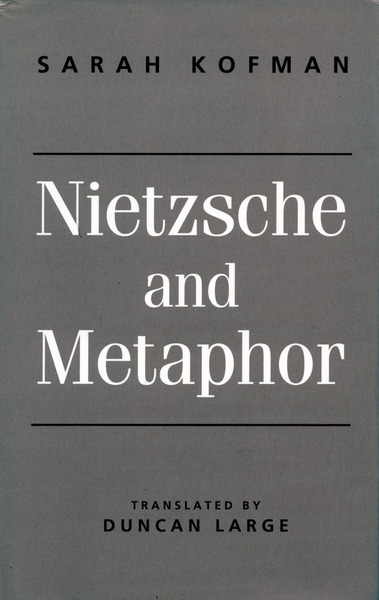 This long-overdue translation brings to the English-speaking world the work that set the tone for the post-structuralist reading of Nietzsche.

The issue of style, of why Nietzsche wrote as he did, is fundamental, on any level, to reading his texts. Some Nietzsche critics (in particular, those, such as Jean Granier, indebted to Heidegger's reading), in effect translated Nietzsche's terms back into those of a philosophy of ontology. This book (which includes an appendix specifically directed against the "Heideggerian" reading) shows how such an approach fails to interrogate the precise terms, such as "Nature" or "life", that Nietzsche used in place of "being," and to ask the meaning of this substitution.

The author gives not only a reading of Nietzsche's ideas, but a method for investigating his style. She shows in great detail how it influences both Nietzsche's ideas and the way in which they are to be understood. In so doing, she exemplifies how post-structuralist methods can be used to open up classical philosophical texts to new readings. She write conceptually in the knowledge that the concept has no greater value than metaphor and is itself a condensation of metaphors, rather than writing metaphorically as a way of denigrating the concept and proposing metaphor as the norm, and thus acknowledges the specificity of philosophy, its irreducibility to any other form of expression—even when this philosophy has nothing traditional about it any longer, even when it is, like Nietzsche's an unheard-of and insolent philosophy.

Sarah Kofman is Professor of Philosophy at the University of Paris I. Her most recent book to appear in English is Freud and Fiction.