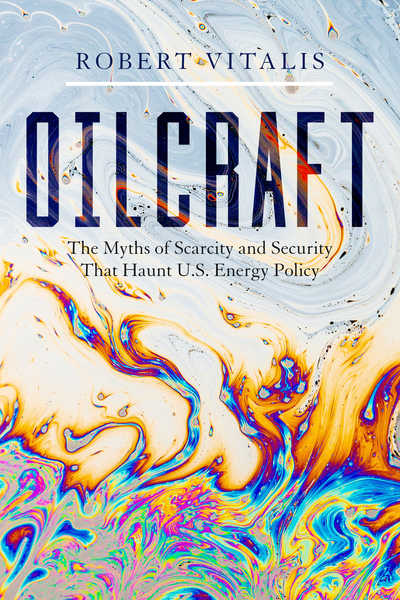 A bracing corrective to the myths that have shaped economic, military, and diplomatic policy, dispelling our oil-soaked fantasies of dependence.

There is a conventional wisdom about oil—that the U.S. military presence in the Persian Gulf is what guarantees access to this strategic resource; that the "special" relationship with Saudi Arabia is necessary to stabilize an otherwise volatile market; and that these assumptions in turn provide Washington enormous leverage over Europe and Asia. Except, the conventional wisdom is wrong.

Robert Vitalis debunks the myths to reveal "oilcraft," a line of magical thinking closer to witchcraft than statecraft. Oil is a commodity like any other: bought, sold, and subject to market forces. Thus, the first goal of this book is to expose the suspect fears of oil scarcity and conflict. The second goal is to investigate the significant geopolitical impact of these false beliefs.

In particular, Vitalis shows how we can reconsider the question of the U.S.–Saudi special relationship, which confuses and traps many into unnecessarily accepting what they imagine is a devil's bargain. The House of Saud does many things for U.S. investors, firms, and government agencies, but guaranteeing the flow of oil, making it cheap, or stabilizing the price isn't one of them. Freeing ourselves from the spell of oilcraft won't be easy—but the benefits make it essential.

Robert Vitalis is Professor of Political Science at the University of Pennsylvania. His books include America's Kingdom: Mythmaking on the Saudi Oil Frontier (Stanford, 2007), named one of the best books of the year by the London Guardian and an essential read by Foreign Affairs, as well as White World Order, Black Power Politics: The Birth of American International Relations (2015) and When Capitalists Collide: Business Conflict and the End of Empire in Egypt (1995).

"Oilcraft eviscerates all the fundamental myths about the so-called special relationship between the House of Saud and the U.S. foreign policy establishment. Robert Vitalis thinks way outside the conventional wisdom—and the implications are startling: we don't need a devil's bargain with Saudi princes, least of all with a mad crown prince."

—Kai Bird, author of The Good Spy and American Prometheus

"Oilcraft dismantles, demolishes, and incinerates the bogus claims and specious myths that for decades now have perverted U.S. policy in the Middle East. In this briskly written and thoroughly documented study, Robert Vitalis demonstrates that America's 'endless wars' have their origins in an apparently inexhaustible capacity for self-deception."

—Andrew Bacevich, author of The Age of Illusion: How America Squandered Its Cold War Victory

"Robert Vitalis has once again revealed that our conventional wisdom is filled with empty, and often dangerous, self-delusions. Taking on the virtually unanimous conviction that a longstanding 'oil-for-security deal' underpins U.S. relations with Saudi Arabia, he shows it to be inaccurate, illogical, deceptive, and ultimately self-defeating. Vintage Vitalis, this book is a triumph of clear-eyed and courageous criticism."

"Robert Vitalis's Oilcraft couldn't be more timely. For decades, the idea that the United States objectively needs oil has been taken as gospel, justifying U.S. power in the world while clouding critiques of that power. This book is indispensable to understanding the current moment, showing that moving beyond fossil fuels is more akin to quitting a sect than breaking an addiction."

—Greg Grandin, author of The End of the Myth: From the Frontier to the Border Wall in the Mind of America

"If one accepts Mr. Vitalis's scarcity/security thesis, there's much to explore regarding American shale and geopolitics."

"Vitalis makes a strong case against delusional thinking, whether in domestic affairs (especially regarding fossil fuel dependence) or across geopolitical boundaries. Recommended."

"Robert Vitalis' latest book, Oilcraft, is a valuable addition to the new wave of critical studies on the history of oil and 'energy policy' that have appeared in recent years... Oilcraft takes on the most fundamental guiding principles behind scholarship and policy-making: namely that the United States' need to secure the free flow of cheap oil has driven some of its most unsavory foreign policy positions. [Vitalis] turns the focus back on American academics, think tanks, and policy circles to trace the origins of this pervasive myth about the need, or even the mere ability, to secure access to, and the affordability of, oil."

"A short, spirited polemic, Oilcraft deserves a wide readership. Vitalis provides a useful reference for those making the arguments that conservation and markets, not garrisons and aircraft carriers, should underpin U.S. energy supply."

"Even if one does not delight in aggressive polemics,Oilcraft is highly recommendable to anybody interested in the history of oil and international relations.... It is particularly illuminating to read it in 2022 as the Russian war on Ukraine has produced a new wave of geopolitical thinking in which what Vitalis calls 'raw materialism' plays a prominent role."