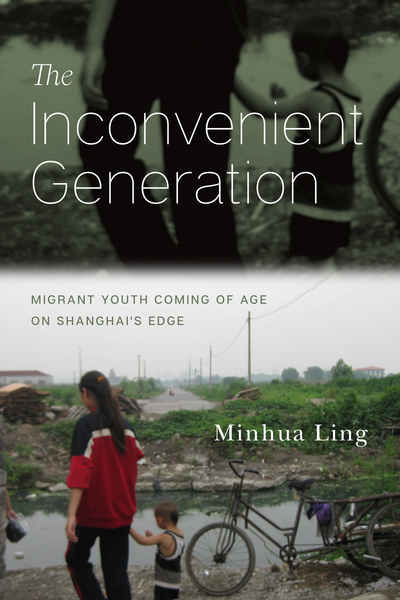 After three decades of massive rural-to-urban migration in China, a burgeoning population of over 35 million second-generation migrants living in its cities poses a challenge to socialist modes of population management and urban governance. In The Inconvenient Generation, Minhua Ling offers the first longitudinal study of these migrant youth from middle school to the labor market in the years after the Shanghai municipal government partially opened its public school system to them. Drawing on multi-sited ethnographic data, Ling follows the trajectories of dozens of children coming of age at a time of competing economic and social imperatives, and its everyday ramifications on their sense of identity, educational outcomes, and citizenship claims. Under policies and practices of segmented inclusion, they are inevitably funneled through the school system toward a life of manual labor. Illuminating the aspirations and strategies of these young men and women, Ling captures their experiences against the backdrop of a reemergent global Shanghai.

Minhua Ling is Assistant Professor in the Centre for China Studies at the Chinese University of Hong Kong.

"Ranging across all the main sites of social life – work, school, leisure, reproduction – Minhua Ling's comprehensive, meticulous, and valuable ethnography gives a worm's-eye view of life for Shanghai's second-generation migrant youth. On the city's edges and living in insecure, often ramshackle homes, they seek to shape a meaningful life and sense of personal worth under multiple pressures of marginalization, but they are the fastest-growing segment of a soon-to-be mostly migrant city. This picture of Shanghai shows us some of the results of the world's largest-ever human migration and the likely future dimensions of suffering and belonging in mega-cities everywhere."

"Minhua Ling's sensitive, fine-grained narrative of what she terms 'the inconvenient generation' affords a periscopic vision of ongoing state-structured discrimination against the children of rural migrants as this second generation comes of age. The reader can only ache over her poignant presentation of cosmopolitan dreams and dashed hopes as these young people's onward avenues remain blocked, some three and a half decades since their forebears set forth for the cities. The author's sharp eye, analytical acuity, and compassion have produced an engrossing, empathetic chronicle."

"Based on an in-depth longitudinal study, The Inconvenient Generation offers an original and riveting ethnographic account of the lived experience of second-generation Chinese migrant youth in a rapidly changing global Shanghai. Beautifully crafted, it is a poignant story about coming of age as 'liminal subjects,' who are caught in China's persistent rural/urban divide and yet strive to attain their dreams and aspirations while facing an unforgiving reality shaped by the urban citizenship regime, a massive demand for manual labor, and segmented inclusion."

—Li Zhang, author of Strangers in the City and In Search of Paradise

"Minhua Ling offers an incisive account of the segmented inclusion and unequal citizenship facing millions of migrant youths in fast-changing Shanghai....By skilfully interweaving qualitative data with fresh analysis, Ling invites readers to reflect on the long-standing mechanisms of social inequality and their direct impact on the people."