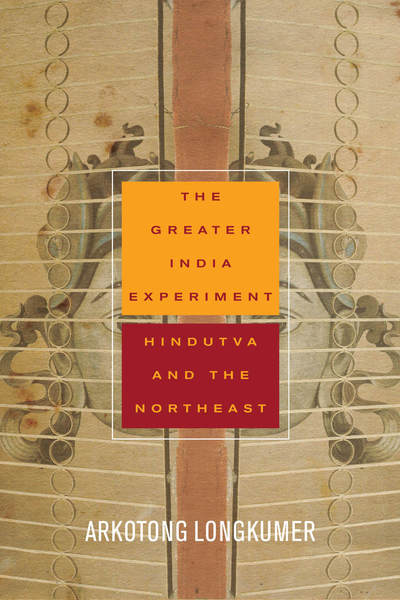 The assertion that even institutions often viewed as abhorrent should be dispassionately understood motivates Arkotong Longkumer's pathbreaking ethnography of the Sangh Parivar, a family of organizations comprising the Hindu right. The Greater India Experiment counters the urge to explain away their ideas and actions as inconsequential by demonstrating their efforts to influence local politics and culture in Northeast India. Longkumer constructs a comprehensive understanding of Hindutva, an idea central to the establishment of a Hindu nation-state, by focusing on the Sangh Parivar's engagement with indigenous peoples in a region that has long resisted the "idea of India." Contextualizing their activities as a Hindutva "experiment" within the broader Indian political and cultural landscape, he ultimately paints a unique picture of the country today.

Arkotong Longkumer is Senior Lecturer in Modern Asia at the University of Edinburgh, and Senior Research Fellow at the Kohima Institute, Nagaland. He is the co-author of Indigenous Religion(s): Local Grounds, Global Networks (2020), and co-editor of Neo-Hindutva (2019).

"This vivid ethnography of Hindu nationalist militants in Northeast India brings to life an encounter of contrary convictions. It explores how enthusiasts for the idea of a singular Indic identity feel forced to adapt their tactics in a region where this identity is soundly challenged. Subtle and surprising, this extraordinary study is essential reading for anyone interested in contemporary Hindu nationalist politics."

"Arkotong Longkumer presents readers an original, impressive study on the religious foundations and anxieties of Indian nationalism. This is powerful work that intimately engages with issues of sovereignty, democracy, secularism, and culture in postcolonial India."

"This is the first book accounting for the rise of Hindutva in India's Northeast. Longkumer's deeply ethnographical approach allows him to painstakingly analyze the modus operandi of the Hindu nationalist activists at the grassroots level in a part of India where ethnic tensions are mounting dangerously."

"Longkumer must be commended for writing a pioneering book on the protean forms of Hindutva today. His most striking contribution might be to remind us that even the most unsavoury forms of political imaginaries can become palatable over time through careful and creative forms of persuasion."

"Arkotong Longkumer'sThe Greater India Experiment: Hindutva and the Northeastis a well-reasoned warning on the rise of Hindutva in the northeast of India. Drawing from his PhD work, his continuing engagement with foot soldiers of the Sangh, and his keen observations, the book provides a rich ethnographic account of the twists and turns of the dominant forces tied to the Indian nation-state, in particular Hindutva. In doing so, he engages with the larger project ofAkhand Bharat, the notional [sic] entity that extends over several countries all the way from Afghanistanto southeast Asia."

"This book is an essential read for scholars of Northeast India, Hindu nationalism, indigeneity, and beyond... Deeply grounded in a relational mode of analysis while engaging a range of humanistic social sciences, Longkumer vividly renders the territorial imaginaries and anxieties driving the most recent iteration of postcolonial expansionism in the region while also shining a light on an alternate landscape of desire and possibility."

"Whether it is of drawing spatial and temporal continuities with 'Bharatvarsh' via a retelling of myth and history, or of manufacturing a shared basis for being and becoming 'indigenous', or of identifying and exorcising elements that are deemed 'foreign' so that the 'indigene' may be claimed for Hindutva, or of appropriating and iconising personalities to fit within the 'nationalist' as well as the 'anti-foreign' narrative, [The Greater India Experiment] provides a rich description of how the Sangh Parivar carefully and creatively inserts itself into the crevices of life in the Northeast."

"[The Greater India Experiment] is significant in its multi-dimensional refletion of and on the complex socio-political and religious landscape of the Northeast... This book is a fine example of the mediating role that a rigorous ethnography can play in seriously engaging with conflicting political and religious worldviews."