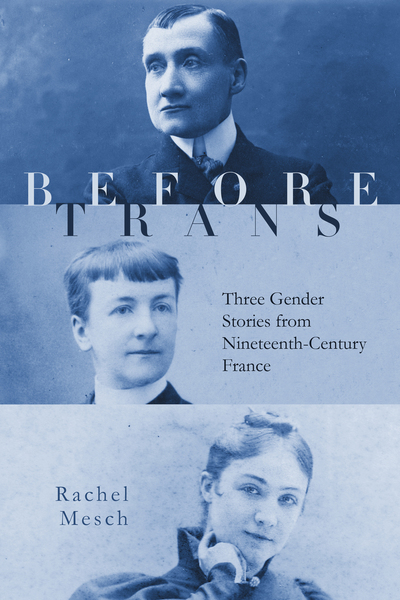 A fascinating exploration of three individuals in fin-de-siècle France who pushed the boundaries of gender identity.

Before the term "transgender" existed, there were those who experienced their gender in complex ways. Before Trans examines the lives and writings of Jane Dieulafoy (1850–1916), Rachilde (1860–1953), and Marc de Montifaud (1845–1912), three French writers whose gender expression did not conform to nineteenth-century notions of femininity.

Dieulafoy fought alongside her husband in the Franco-Prussian War and traveled with him to the Middle East; later she wrote novels about girls becoming boys and enjoyed being photographed in her signature men's suits. Rachilde became famous in the 1880s for her controversial gender-bending novel Monsieur Vénus, published around the same time that she started using a calling card that read "Rachilde, Man of Letters." Montifaud began her career as an art critic before turning to erotic writings, for which she was repeatedly charged with "offense to public decency"; she wore tailored men's suits and a short haircut for much of her life and went by masculine pronouns among certain friends.

Dieulafoy, Rachilde, and Montifaud established themselves as fixtures in the literary world of fin-de-siècle Paris at the same time as French writers, scientists, and doctors were becoming increasingly fascinated with sexuality and sexual difference. Even so, the concept of gender identity as separate from sexual identity did not yet exist. Before Trans explores these three figures' lifelong efforts to articulate a sense of selfhood that did not precisely align with the conventional gender roles of their day. Their intricate, personal stories provide vital historical context for our own efforts to understand the nature of gender identity and the ways in which it might be expressed.

Rachel Mesch is Professor of French and English at Yeshiva University. She is the author of Having it All in the Belle Epoque: How French Women's Magazines Invented the Modern Woman (2013) and The Hysteric's Revenge: French Women Writers at the Fin de Siècle (2006).

"Before Trans is an exceedingly well-written, layered, and compelling account of three overlapping gender-variant biographies. These individuals' stories have never been told together, and Rachel Mesch's beautiful braiding of their lives and loves, their desires and disappointments, offers a fresh and original take on trans history."

—Jack Halberstam, author of The Queer Art of Failure

"This fascinating exploration of three remarkable lives explores a wide range of gender outlaw behavior long before the term was invented. Consistently provocative, deeply researched, and amply illustrated, this book will challenge us to think more clearly about what gender nonconformity meant and did 'before trans.'"

"Original, impeccably researched, and well written, Before Trans represents a vital contribution to humanities scholarship, French studies, and gender and sexuality studies. This thoughtful and informed work deftly demonstrates how much the past has to teach us about what we think of as ultra-contemporary issues."

—Rhonda Garelick, author of Mademoiselle: Coco Chanel and the Pulse of History

"Through deeply personal stories of complex individuals, Rachel Mesch gives us a much-needed history of transgender 'before' our modern definitions and categories of gender identity. Joining an exciting new wave of scholarship on gender non-conforming historical figures, Before Trans pushes feminist history beyond the binary, showing how we can better locate and understand past trans practices."

—Leah DeVun, author of The Shape of Sex

"Before Trans is lucid, compelling, and a must-read for specialists in trans history as well as gender history more broadly. Using modern trans frameworks to understand the past, Rachel Mesch gives us much to contemplate in her analysis of gender identity's complex history."

—Emily Skidmore, author of True Sex: The Lives of Trans Men at the Turn of the Twentieth Century

"Mesch is careful not to make her subjects too representative of modern ideas about gender roles, and delivers multifaceted portraits of complex individuals, rather than caricatures in service of buzzwords and slogans. This sensitive triple biography will appeal to scholarly readers interested in the origins of trans, queer, and feminist perspectives."

"A fascinating analysis of identity, women's rights, and literature as a transformative tool....Mesch does such a masterful job of relating to her readers, as well as her subjects, that we feel safe in her hands."

"Rachel Mesch adroitly walks the methodological tightrope of examining historical characters through the lens of transgender analysis, yet accepting their gender originality. Her writing is theoretically savvy without being academically ponderous. Mesch's detailed and textured survey of these women and their writings does full justice to their unique talent and complex psyches."

EuropeNow
Before Trans: A Virtual Event

Gay, Lesbian, Bisexual, and Transgender Round Table of the American Library Association
More in History—Gender and Sexuality